A rocky, remote outcrop in Scotland inspired the realisation that the Earth was millions of years old – this cliff led Charles Darwin to his theory of evolution.

“Just a bit further, round the next bend,” my guide Jim said, as our fishing boat pitched and rolled in the choppy waters of the North Sea. It was hardly reassuring. But as we lurched from side to side, I reminded myself that the purpose of our trip worth it. We were re-tracing a 230-year-old voyage that forever changed humanity’s perspective of the history of the Earth – and even of time itself. 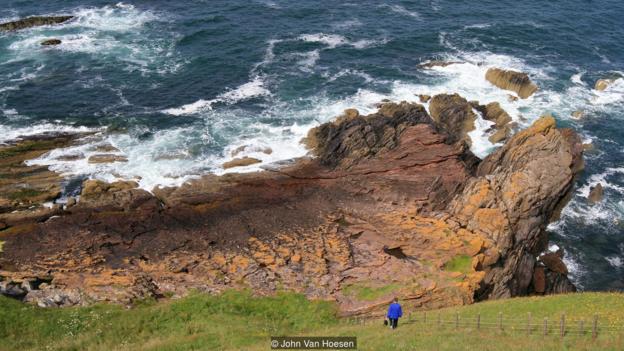 Our destination was Siccar Point. I’d visited earlier that day, but on foot. Standing on the cliffs high above the point, about an hour’s drive (and a short coastal walk) east of Edinburgh, I felt the undeniable sense of being at a boundary. Far below, steep shards of grey rock plunged into the frothing sea. At the clifftops all around, though, the rocks took on a reddish tinge.

But to really appreciate the wonder of Siccar Point, probably the most famous geological site in the world, you have to see it by boat.

Suddenly Jim tapped me on the shoulder. “Up ahead,” he pointed. As we drew closer, I began to make out the outcrop’s telltale layers. Up close, the contrast between the vertical sheets of oceanic rock along the bottom of the cliff and the horizontal layers of sandstone high above were clearly visible.

Back in 1788, few people understood the significance of that contrast. It took an Enlightenment thinker – 62-year-old farmer James Hutton, who made this journey around Siccar Point more than two centuries ago – to realise that it proved the existence of ‘deep time’.

Long before Hutton arrived, Siccar Point was a site of historical and geographic importance. More than 1,000 years earlier, the ancient Britons built a small hill fort here to warn off invaders from the north. But no-one had realised how Siccar Point illustrated the story of the Earth itself. 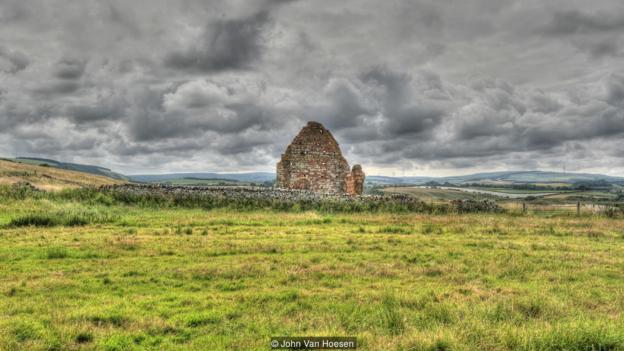 18th Century and the Cliff

In fact, almost everyone in 18th-Century society still believed the Earth was somewhere between 4,000 and 10,000 years old, an estimate based on literal Biblical interpretations. Hutton believed that the Earth was in fact far older. It was a realisation that would change the course of science.

Like many key figures of the 18th-Century Scottish Enlightenment, such as the economist Adam Smith, philosopher David Hume and poet Robert Burns, Hutton was a polymath. Born in 1726, he enrolled as a classics student at the University of Edinburgh at just 14, and by 23 he had both a medical degree from the University of Leiden in Holland and a burgeoning interest in chemistry. A couple of years later, he discovered how to isolate ammonium chloride from soot. He began a business manufacturing it for use in smelling salts, dyeing and metalworks, providing him with wealth for life.

But amidst this professional success, Hutton’s personal life had taken a turn for the worse. Perceived as a man of ‘loose character’ within upper-class Edinburgh society after fathering an illegitimate son, he retreated to a series of farms near the Scottish-English border that he had inherited from his father. This began a fascination with agriculture that he later described as “the study of my life”. Agriculture turned his ever-questioning mind to the processes that formed the Earth – and to the age of the Earth itself.

“One of the difficulties he faced was a lot of soil erosion,” said Colin Campbell, chief executive of research centre The James Hutton Institute. “He was forever wondering how to keep the soil on the land and stop it disappearing off in rainstorms down the rivers. But he started to realise there was a renewal process, so while the soil would wash away, eventually new soil would form, and this cycle took large amounts of time.”

Hutton had begun to understand that the land was sculpted and shaped by gradual processes, all operating over immense timescales far longer than a few thousand years. After spending decades observing and slowly piecing together his thoughts, he presented his findings in 1785 to a small academic group of philosophers at the Royal Society of Edinburgh.

It was well received. But to convince a wider audience, Hutton knew he needed more evidence. 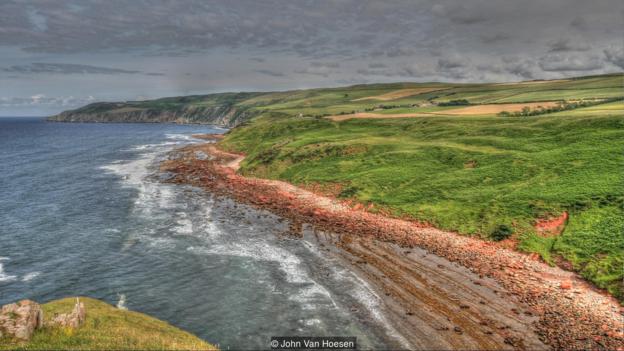 What Happened in Scotland?

He set off around Scotland seeking landscapes with clear junctions or unconformities, which he believed represented gaps in time between different geological features. The more visually striking the contrast, the easier it was to see that these features had been created separately over enormous time periods, even many millions of years apart.

As soon as Hutton set eyes upon Siccar Point, he knew he had found what he’d been searching for. As his companion that day, philosopher and mathematician John Playfair, later described the moment: “The mind seemed to grow giddy by looking so far back into the abyss of time.”

Hutton’s hunch was correct. Today we know the oceanic greywacke rock was formed some 435 million years ago. Over time, beds of mud on the sea floor were hardened, tilted vertical, lifted above the waves and then slowly eroded to reveal the layers. 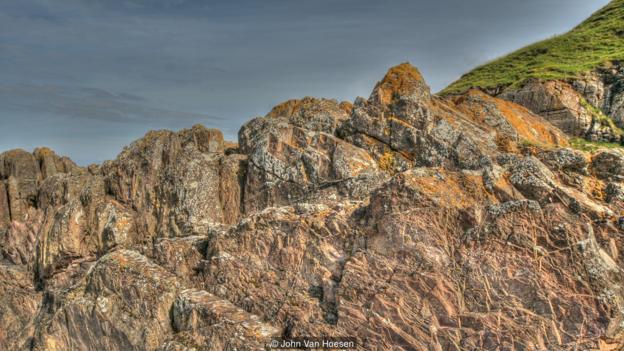 But it was another 65 million years before the sandstone was formed. This happened in a vastly different climatic period, when Scotland was a tropical region lying just south of the equator. The rivers of the rainy season slowly deposited desert sands on top of the greywacke rock, over time consolidating them into stone.

“Hutton realised that the formation and movement of these rocks to create the coastline we see at Siccar Point couldn’t happen in sudden cataclysms over years or decades,” said Iain Stewart, geologist at the University of Plymouth. “He understood this concept of deep time: that you need tens of millions of years to effect big changes on the planet. And this is perfectly illustrated by the unconformity between these oceanic and terrestrial rock layers.” 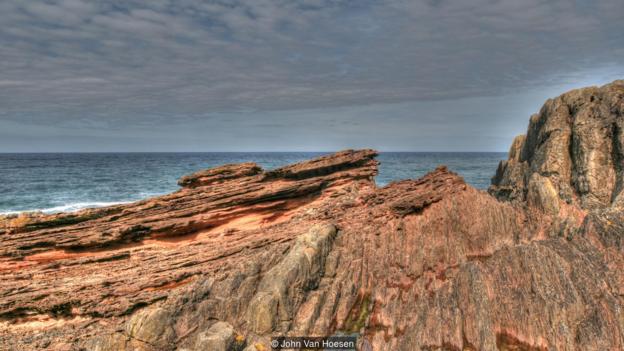 Hutton’s ideas started to become mainstream in the early 19th Century. Also, after Playfair published his 1802 book Illustrations of the Huttonian Theory of the Earth. Besides, summarising his friend’s theories. Included was an illustration of Siccar Point.

“Hutton himself, during his lifetime, was famous for giving these impenetrable talks,” Stewart said. “Much of his writing is also quite impenetrable.

These ideas heavily influenced a young Charles Darwin. Besides, providing much of the basis for his thinking that ultimately led to the Theory of Evolution.  Also, “If you believe the Earth is only 4,000 years old. Also, there’s not much time for natural selection and evolution,” Campbell explained. Moreover,  “But if you believe the world is millions and millions of years old.  Besides, Hutton really had a massive impact in terms of people’s thinking in the centuries to come.”

Hutton himself never witnessed the legacy left by his ideas. He died in 1797 at the age of 70, nine years after his visit to Siccar Point. Mysteriously for one of Scotland’s greatest scientists, his death barely commemorated and he buried in an unmarked grave. It took another 100 years before a group of geologists raised the funds to erect a gravestone for him.

“Nobody knows why this happened,” Campbell said. “There could have been a number of reasons – he married, he did have an illegitimate son. Some people claim he drank a lot and womanised, but that may partly be a myth. Away from his scientific genius, there’s a lot of unexplained personal history with Hutton.” 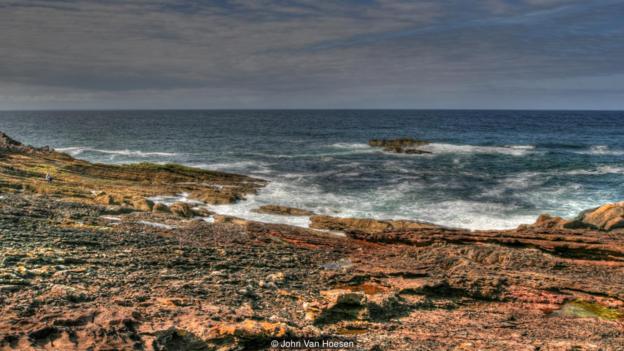 Much of this owed not only to Hutton, but to Siccar Point itself.

“It’s such a massive, obvious contrast in terms of not just the angle . Also, the colour of the rocks. After that leaves absolutely no room for anyone to argue about it,” Campbell said. Besides,  “It so neatly summarises all of Hutton’s theories in one big way. Furthermore, I think that’s one of the reasons why it’s so significant.”