The burger McDonald’s can’t master: Vada pav is synonymous with the city of Mumbai, with almost every resident, from factory workers to Bollywood stars, unabashed in declaring their love for it.

Suresh Thakur dropped another batch of potato patties, known as batata vada, into the cooking oil that had been sizzling in a massive iron pan since early morning. He’d already shaped the patties, made with mashed potato mixed with masala spices, green chilli and, occasionally, finely chopped raw onion, into near perfect spheres, and dipped them quickly in a thick chickpea batter just before frying. The vada made a gentle hiss as they hit the oil, and the aroma of the chickpea batter floated in the air, making me impatient. A few tosses and turns, and the vada were ready.

Thakur sliced open a soft, square bread roll called a pav, slathered on some green chilli-coriander chutney, and gesturing to me with a bowl of dry garlic chutney asked, “Lahsun?”

I nodded, and he sprinkled on a generous quantity of garlic chutney, then pressed the vada on top. He wrapped the sandwich in a piece of old newspaper, added a side of fried green chilli (in case the spice hit was not enough) and handed it to me in exchange for 12 rupees (roughly 14 pence).

As my teeth sank into the soft cloud of pav and the crispy vada, it was almost as if I was biting into the original taste of Mumbai. It was a perfect contrast of tastes and textures: the chewy blandness of the pav acting as a foil to the piquant crunchiness of the vada. Even to my palate, shaped by years of spicy food, the first mouthful was a fiery hit. I could feel the tang of both chutneys spread across my tongue. The vada pav is a delectable carb overload – an instant energy boost. 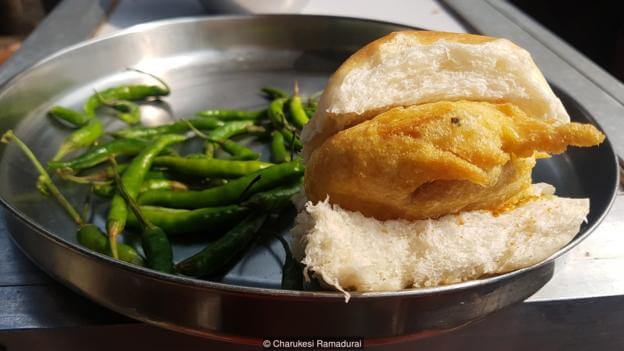 Today, this snack is synonymous with the city of Mumbai, with almost every resident, from factory workers to college students to Bollywood stars, unabashed in declaring their love for it. More than two million of these crispy, flavourful sandwiches are consumed in India’s financial capital and largest metropolis every single day.

“For a city that’s always on the move, I think the vada pav makes for the quickest, wallet-friendly, on-the-go snack,” travel blogger Kaushal Karkhanis, who runs a website dedicated to this single dish, told me. “I think it’s the first ‘eating out’ experience for just about anyone in Mumbai. At this price, it cuts across social strata and is a great leveller.”

While the vada pav is delicious (as fried snacks tend to be), the overwhelming love for this snack often leaves outsiders bemused. But the truth is that the Maharashtrian capital has a close cultural connection with the vada pav that goes way beyond taste.

The dish is believed to have been invented in 1966 by a Mumbaikar, Ashok Vaidya, who opened the first vada pav stall opposite the Dadar train station, through which hundreds of thousands of workers – often in need of a quick, inexpensive snack – passed every day on their way to the textile mills in suburbs such as Parel and Worli. Vada pav was an instant hit with Bombayites (as Mumbaikars were then known). Vaidya remains a Mumbai icon; one local journalist even made a documentary about him, called Vada Pav Inc. 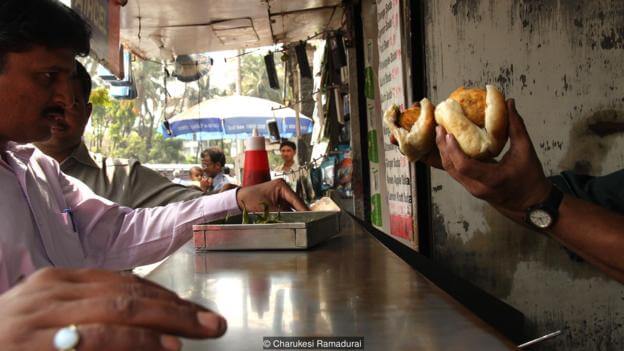 After strikes throughout the 1970s and ‘80s eventually led to the textile mills’ closures, many former mill workers opened vada pav stalls of their own with the encouragement of Maharashtra state’s right-wing political party, Shiv Sena.

“The vada pav was subsequently co-opted by the Shiv Sena in order to offer a Maharashtrian alternative to the Udupi joints that were extremely popular at the time,” explained Mumbai-based food writer Meher Mirza, referring to the stalls set up by people from the South Indian temple town of Udupi in Karnataka. Shiv Sena’s campaign followed the rise in popularity of several south Indian dishes: the dosa (a crepe-like pancake made from fermented batter, traditionally stuffed with a spicy potato filling) and the idli (a savoury steamed cake made from black lentils and rice). The goal was to convince Mumbaikars to spurn ‘outside’ snacks and embrace their own cuisine, a strategy that worked very well in those turbulent economic times.

Ironically, both of vada pav’s main components – the potato and the bun – are European imports, brought into India by the Portuguese around the 17th Century. The only key ingredient originally belonging to the region – or even India – in the dish, is the besan (chickpea flour) in which the potato mix is coated before being deep-fried. Still, Mumbaikars consider the vada pav a thoroughly ‘Bombay’ (as Mumbai is still called by many of its residents) dish. 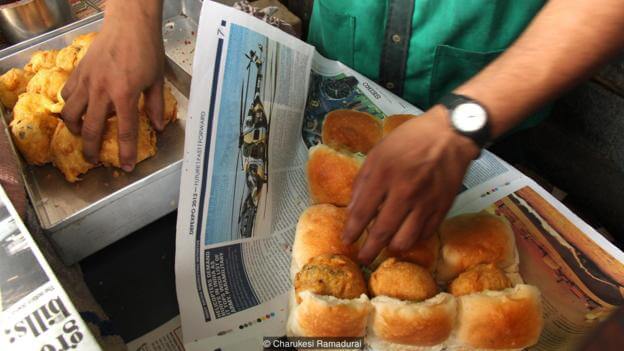 The vada pav industry in Mumbai chugged along peacefully until the 1990s with the arrival of international chain restaurants like McDonald’s, which served vegetarian burgers similar to vada pav to accommodate many Indians’ aversion to beef. But although the patties consist of fried potato, McDonalds’ McAloo Tikki burger could not be more different from the beloved vada pav. Not only does it not match the spice levels of the home-grown vada pav, but it also leaves little room for artistry. The flavour of vada pav depends entirely upon the whims of the cook, with every vendor claiming to have a secret recipe or a special ingredient that makes his vada pav unique: a pinch of ground masala, or a topping of choora (the crispy crumbs left at the bottom of the frying pan) along with the vada. It’s no wonder that the vada pav has always remained more popular in Mumbai, where it flies off street stalls like the proverbial hot cake.

In the early 2000s, local entrepreneur Dheeraj Gupta saw an economic opportunity and franchised the vada pav in his chain JumboKing. “Calling it the ‘Indian burger’ immediately gave it an aspirational value, as well as a cultural context for those outside Mumbai city,” Gupta told me.

The company also introduced several new spins on the traditional treat, such as the Schezwan vada pav (inspired by Chinese cuisine) and the Nacho vada pav (topped with tortilla chips). Gupta says that the modern variants have struck a chord with consumers, accounting for more than 40% of sales. JumboKing now has 75 outlets in Mumbai alone, with each selling more than 500 vada pav every day, Gupta said. The chain can also be found in cities like Pune and Indore, and Gupta has plans to expand his reach even further over the next five years. 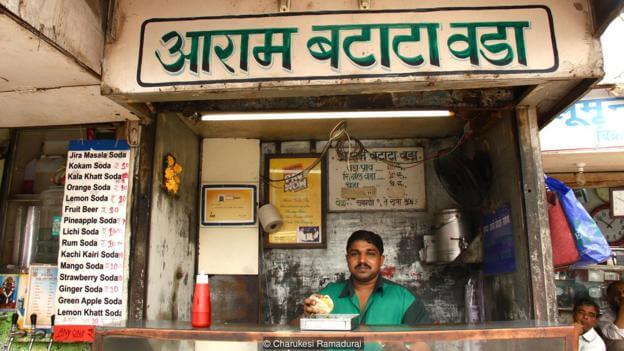 However, many Mumbai residents still vouch for the taste of the vada pav made in the street-side stalls. The most popular vada pav stalls – such as Aaram Milk Bar opposite the Chhatrapai Shivaji Terminus or Ashok Vada Pav in the suburb of Dadar – can still be found near suburban train stations across the city in order to serve the commuters who rely on the ‘Bombay local’ trains (as residents call them) to get to work. Some vendors have even begun serving adapted versions, dishing out Schezwan and sweetcorn vada pav with panache.

But as a former Mumbai resident, I am still partial to the original vada pav. To me, it’s the true taste of the city.