the Caribbean boat trip that cured my fear of water

“Each time I climbed the launch’s rickety ladder to board the ship’s equally precarious stairway, I chipped away at the fear that had consumed and contained me for decades.” but the Caribbean boat trip changed my life.

At a distance, I spotted the towering 236ft cruising schooner S/V Mandalay anchored in Grenada’s St Georges bay. Sailing the Southern Caribbean, much like Jack Sparrow in Pirates of the Caribbean, was never on my radar, but seeing her in the distance, I understood the lure of the three-masted barkentine. I wondered why she wasn’t coming closer, moving toward the dock for her passengers.

“We’re going to her,” said my husband, who was as giddy as a two-year-old about our adventure on the high seas.

It had been a year earlier when he had discovered this seven-day photography excursion that would allow us to sail along the Grenadine island chain, part of the Windward Islands, and photograph some of the world’s most breathtaking locations. As professional travel photographers, it was a chance of a lifetime. Not giving much thought to the logistics or protocols, I signed up with the provision that water and I would not come in contact. 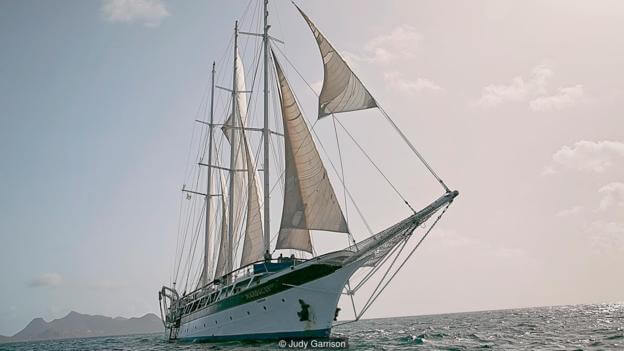 Now, some 400 yards away, a small launch barrelled toward us, bounding over the swells in the harbour, with two men aboard. “Here comes our ride,” my husband trumpeted.

Immediately, my stomach fell and sweat poured. Having cruised on large ships, I knew the boarding customs of walking down enclosed ramps with water nowhere in sight. We’d be high above the waterline and ocean movement usually went undetected. However, this was different; the vessel, built in 1923, was powered by sail and the roll of the sea. With only 25 passengers and a crew of 12, it was just us and the ocean. But, the kicker: the only way on and off the vessel was by way of a launch, up and down a small stairway as the ocean waves slapped at your feet.

Water terrifies me. It has always terrified me. Growing up in sweltering Georgia summers, I was the one who remained at the shallow end of the pool, gingerly sloshing waves of crystal blue chlorinated water over my lower body avoiding body parts above my elbows. And if I dared to dunk my head, I would finger-squeeze my nose, which immediately drew jeers of ‘chicken’ and ‘baby’ from water nymphs who bounced from side to side of the pool. I wasn’t sure which was worse: drowning or doing the finger-squeeze. 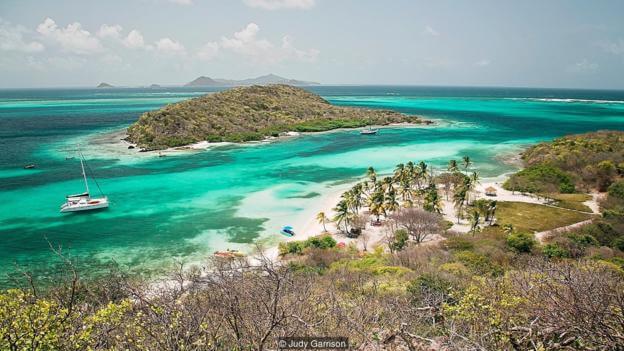 From that moment forward, I became an expert in evaluating situations, avoiding any scenario that included water. I have never stood directly underneath a waterfall or a shower head. Jet skis absolutely terrify me. I missed many adventures, but I kept my feet on solid ground. However, my taking this trip was a direct result of wife-guilt, including a husband’s promises of lifetime jaunts to destinations devoid of large bodies of water.

Approaching was the wooden launch that would pick me up and carry me to the Mother Ship. No barriers. No fixed sides. No safety nets. At that very moment, I was transported back, standing in the cross-hairs of ‘chicken’ insults, only these were blasting inside my head.

As the launch arrived, two crewmen bounded onto the dock. I looked around at the stout adults with piles of bulky luggage to be placed in that bucket of a boat. I wanted to run. I slowly dragged myself to the back of the line.

With my heart pounding, I knew I had to rid myself of this fear, if not for me, then for my husband. We would be spending a week on the open seas being driven by the wind. For what would not be the last time, I summoned strength from my gut and stepped beside my husband. I can do this. 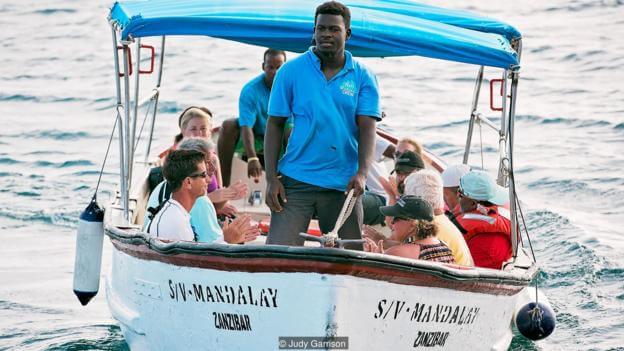 I took a crewman’s hand and stepped onto the launch’s seat, then the deck, and quickly sat down. I did not move. I eyed the life preservers. Good, I thought to myself, I can reach them. If everyone cooperates, makes no sudden movements, we’ll be fine.

Approaching the ship’s massive posture – and the impending transfer – stirred my nerves. The launch pulled alongside the schooner, bouncing off her sides until ropes were heaved and tied to secure her position.

“Leave all your things. We will get them to you,” shouted the crewmen. Passengers eagerly stood and moved toward the steps, ascending onto another set. I watched carefully where feet and hands were placed, plotting my departure. I stood and caught my breath. As I attempted to do what others had done before me, I reached for the two handles on either side of the steps. As both feet were on the top step of the tender, I realised the next one would be onto the ship’s ladder, with nothing but water below. 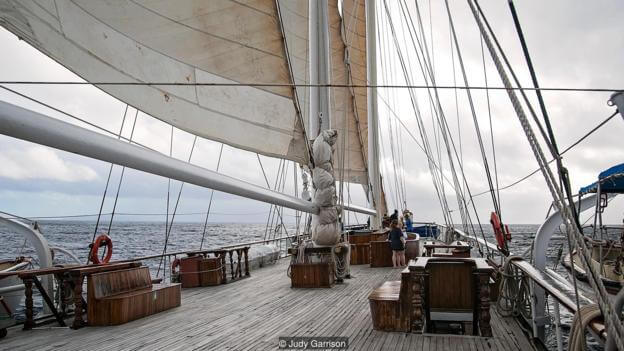 “Left hand on red handle,” the crewmen repeated. I grabbed the red handle with my left hand, and as I reached upward with my right, a stout hand of mammoth strength engulfed mine, pulling me to the top rung with one swift movement. “I’ve got you,” he said as he locked his eyes with mine. I felt wood beneath my feet. Had I fallen, he would have scooped me up in an instant.

I would come to know Blaze as the crewman who steadied my fears. From that moment forward, water, other than its beauty, never entered my mind. Each time I left the schooner, Blaze was there with an open hand. With each robust touch, Blaze cast my fears overboard.

Over the course of the next six days, I stepped on and off the launch, island hopping around four times a day. By mid-week, I was first in line to jump from the launch, no longer requiring the hand of another. I moved myself out of my way, and I got the hang of it. 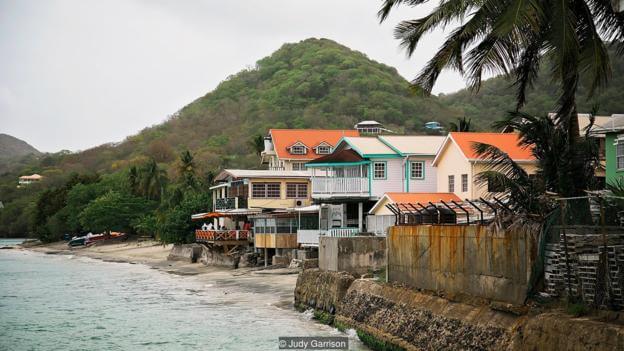 Every isle was movie-scene perfection, featuring a towel in the sand, sun peeping through the palm trees, the occasional inquisitive iguana – and of course, Mash-Up, the ship’s steward, who was ice-chest ready with local Carib beer. How could I have ever missed this?

Other stops included Union Island, Mayreau, Tobago Cays and Grenada’s island of Carriacou, the largest island in the Grenadine chain. Locals hastily surrounded us upon disembarking, hoping we would choose them to lead us around their country.

Most memorable, our stop in Bequia, the Grenadines’ second largest island and our captain’s homeland, where we boarded the back of a truck and held on tightly as it hurriedly climbed the narrow roads to the ruins of Hamilton Fort, a cannon battery and look-out constructed by the British in the 1700s. From our birds-eye view, the bay was dotted with sailboats on a sea of blue-green water, and in the distance, the S/V Mandalay.

We stopped at the local model boat builder, Sargeant Brothers Model Boat Shop, where 10 men were bunched in what was once a small home, now transformed into a workshop. Throughout the shop, hundreds of ship clones were in their beginning, middle and end stages. Out back, gumwood shavings littered the dirt. One man sat at a vice, carving, painting and turning wood into replicas of elegant sea vessels. In the window was a replica of our ship, the S/V Mandalay. 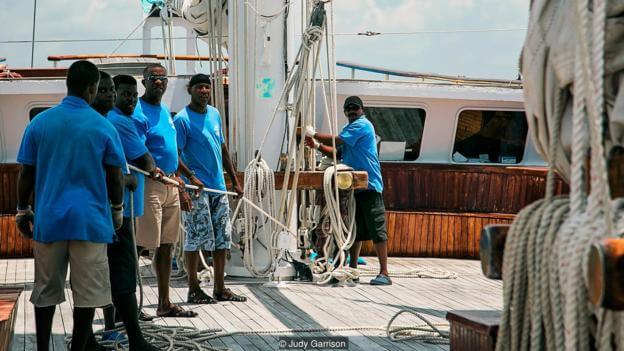 Although I never jumped from the ship’s bow like my husband or snorkelled in the blue Caribbean waters, I wandered from my comfort zone at the request of another only to discover my own transformation as a traveller. Each time I climbed the launch’s rickety ladder to board the ship’s equally precarious stairway, I chipped away at the fear that had consumed and contained me for decades. To others, I might still be the gal who never does the daring; to me, I’m the one in the middle of it all. I realised that in order to see beyond the horizon, you’ve got to be willing to climb out of the boat.

It was Blaze and his stalwart grip that reminded me that without risk, there is no reward. On our last evening while sailing back to Grenada, the night sky offered up one of its most majestic rewards, only visible at this exact latitude – to my north, the North Star; to my south, the Southern Cross. And I was there to see them both.