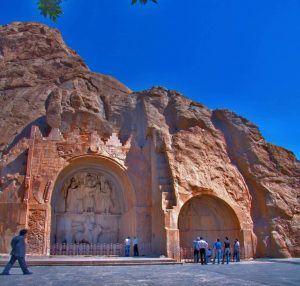 Taq Bostan is a collection of lithographs of the Sassanid period located in Iran in the Taq Bestan neighborhood in the northwest of Kermanshah and in western Iran.

Throughout history, kings have tried to showcase and immortalized their glory not only for their peoples, but also for all history by using art. Besides, one way to show the strength and magnitude of kings has carved on rocks, mountains and creating prominent roles in important events of the time. So, they asked artists to carve out events such as coronation, victory over enemies on the mountain and on a cliff so that every passerby passing by nearby would see it

The historical complex of Taq Bostan welcomes tourists in summer from 8 am to 8 pm and in winter until 17 and 30. 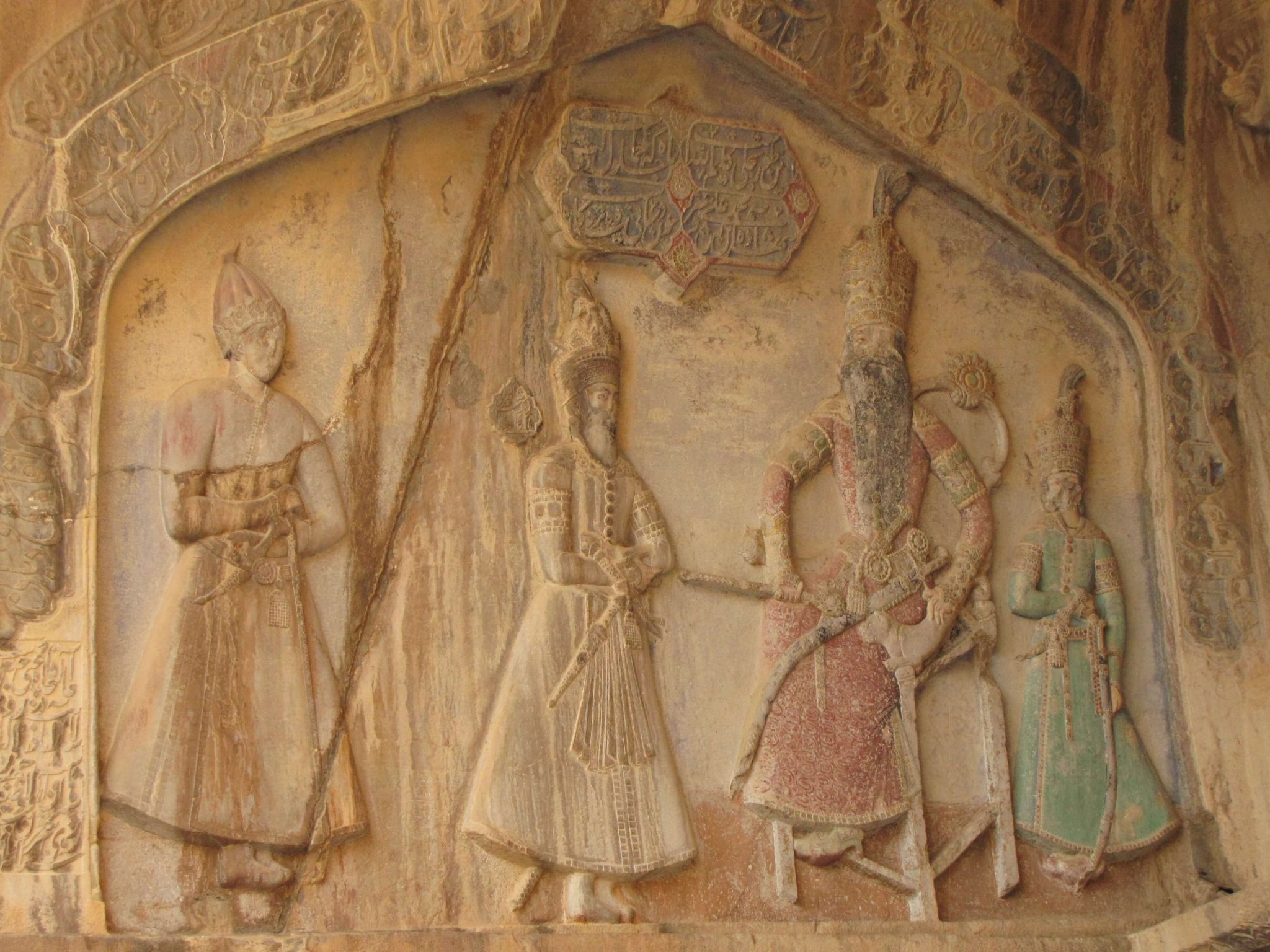 The historical site of Taq Bostan located on the hillside of the same name in the northeast of the current margin of Kermanshah city. You can see this prominent role in Taq Bostan neighborhood. Besides, in the past, Taq Bostan was the name of a village 9 kilometers from Kermanshah city. After that, by passage of time and urban development, the village located in the urban area and became one of the neighborhoods of the city, which currently located in the northeast of Kermanshah.

In addition, this collection of motifs located on the hillside and next to a lake known as Taq Bostan Lake. Also, in the past, this place has been a place for the recreation and hunting of Sassanid kings with its pleasant climate and nature, and the carving roles also indicate this.

In addition, today this embossed series known as Taq Bostan, which pronounced in kermanshahi or Kermanshahi Dialect, “Taq Wehsan”. Besides, in fact, “arch” means “vault” and “eh” means “from” and “sun” means “stone”. Therefore, the arch of Bostan is a vault of stone. Also, Arch is a Persian word and its vault, so it is more correct to write it as an arch. 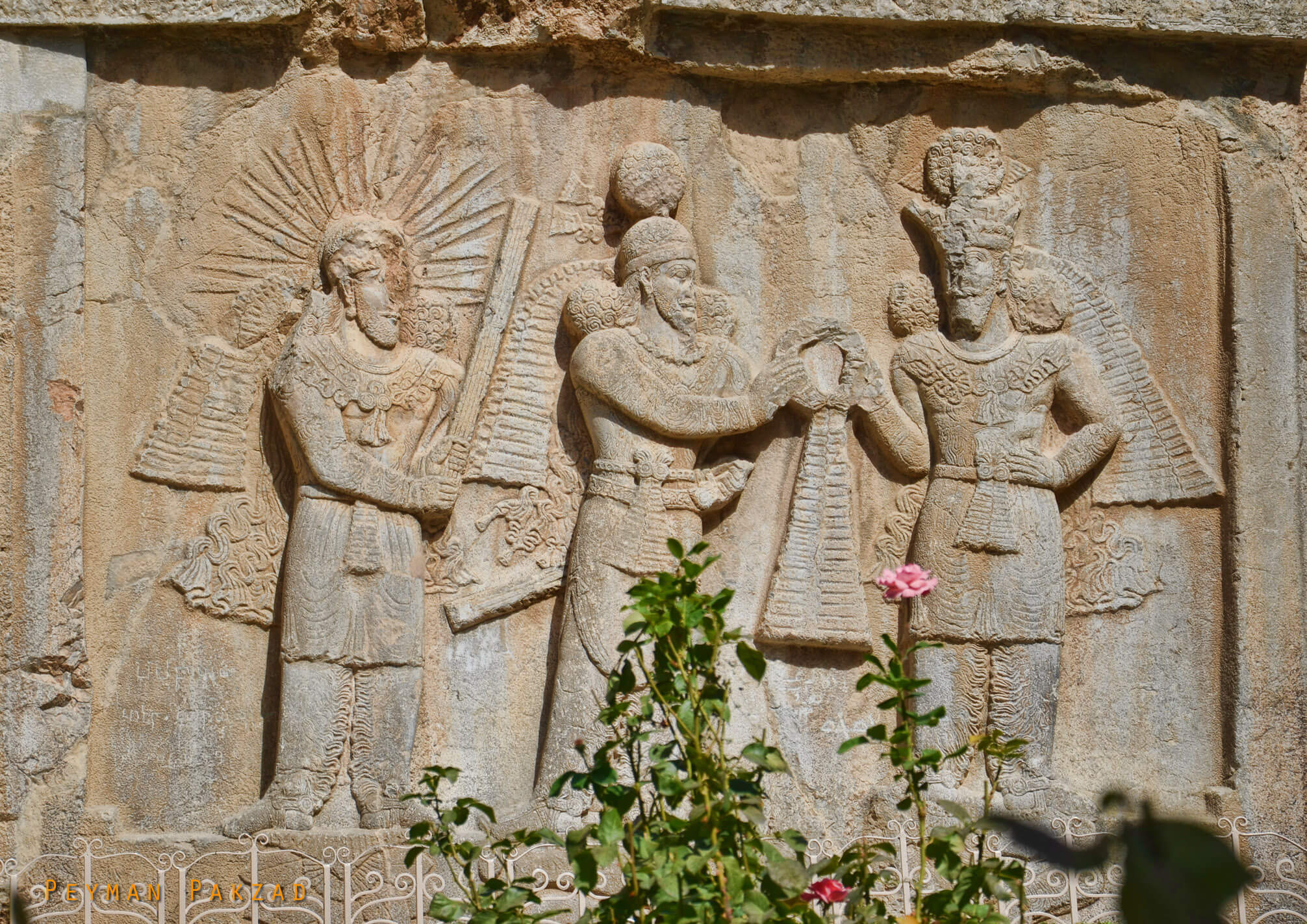 Taq Bostan is an important collection of Sassanid embossed and inscriptions

The Sassanid kings regard the historical complex of Persepolis as the first place of choice for shaving statues of their rule. Besides, however, after the reign of Ardeshirdom (Sassanid king from 379 to 383 CE), by order of him and after reaching the kingdom, Taq Bostan was chosen from other parts of Iran and considered this place the best place to create the stones of his monarchy.

Moreover, perhaps the most important reason for this is its geographical location, which located along the Silk Road (an important trade road on the Asian continent that links West, East and South Asia to North Africa) and enjoys a pristine and beautiful nature.

Also, there is a beautiful and eye-catching fountain in this area that has a pleasant water and has given a double beauty to its surroundings. Certainty, there have been other buildings in this area that now no longer exist. In addition, in this location of the remains of a bridge on the eastern side of Ardeshir’s prominent role can see. Besides, Lithographs have discovered at the top of the Taq-e Bostan spring in recent years. Moreover, there are several opinions about the history of this magnificent historical collection, each of which is interesting and audible in its kind;

The Importance of Taq Bostan

Taq Bostan is one of the sights of Kermanshah, which is of great importance to historians and archaeologists artistically and historically. Besides, its glory can see in the art used by ancient Iranian men. Moreover, Taq Bostan unveils several historical events of the Sassanid era and depicts the coronation of the kings of this period, which we refer to below: 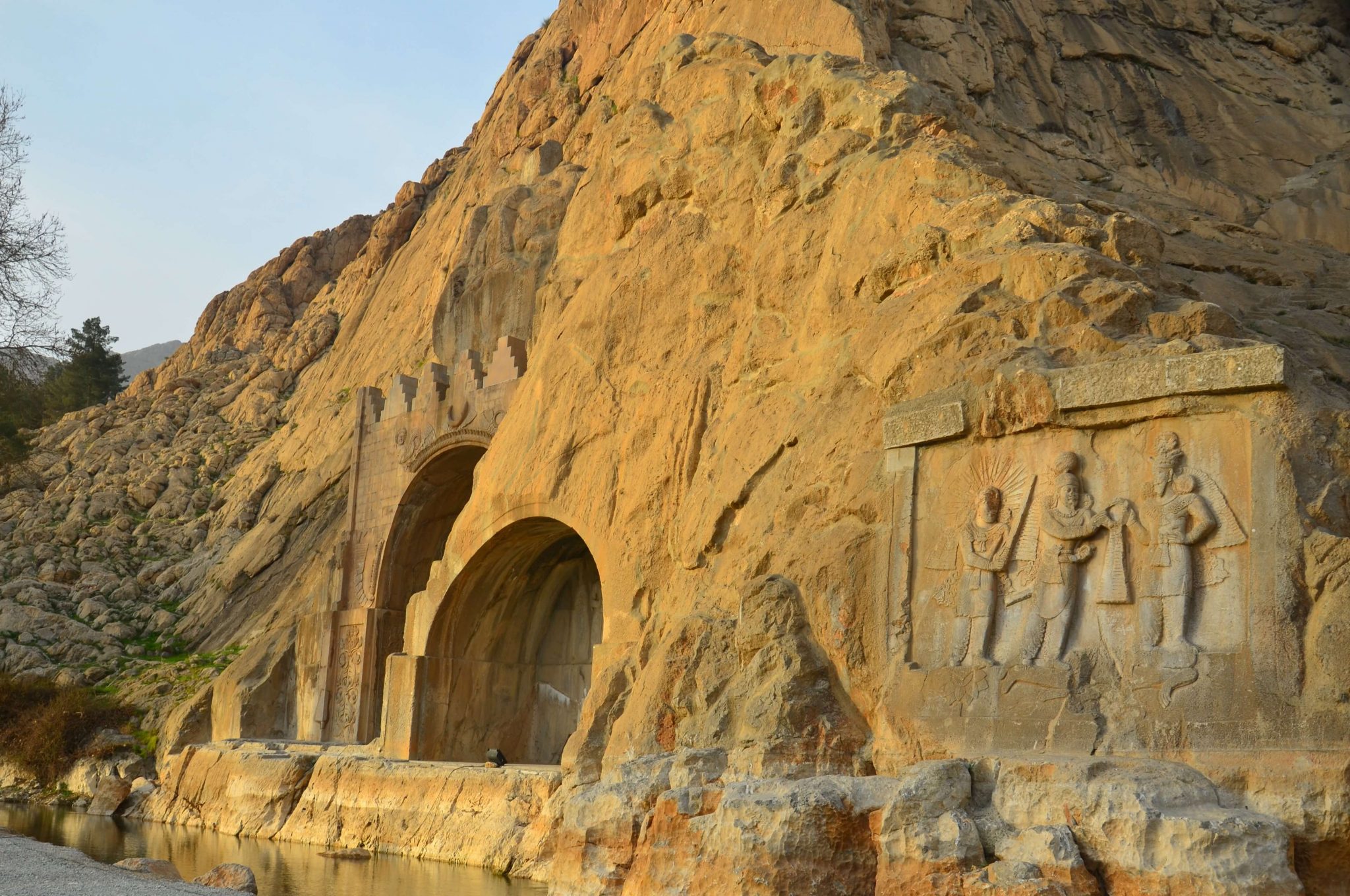 Embossed and Inscriptions of Taq Bostan

The arch of Bostan consists of two interconnected arches made of raw gray stone dug in the mountain. Also, the advantages and characteristics of these rocks are the lack of growth of plants and weeds in it. Besides, this collection composed of three main and important sections, which can consider as the most accurate and at the same time the most beautiful stone works left by the Sassanid rule. These three sections are:

In addition, all the images and motifs carved on the inscriptions and stones in the Taq Bostan collection made with elegance, precision and mastery of artists in such a way that the most minor points can see in them. Also, in this collection, the images of musicians during the Sassanid era are carved and painting and music such as a valuable and artistic work have honored.

Furthermore, Taq Bostan, known as the Hunting Place of Iranian Kings, is the world’s first lithograph that properly fits the rules and principles of painting. Also, the image of Khosrow Parviz riding shabdiz (Khosrow Parviz’s black horse) engraved in this lithograph as if you see a beautiful and commendable painting.

The prominent role of the coronation of Ardeshir II in Taq Bostan depicts beautiful images of the reign and the coronation of the ninth king of the Sassanid dynasty. Also, in this image, Ardeshir II engraved standing with his left hand on his sword and receives a ribbon ring from Ahura Mazda with his right hand.

Besides, his face is seen in three quadrants with a full-face body and in the middle of the image. Moreover, the Shah has had large eyes, prominent eyebrows, curled beards and thick hair that has continued to the shoulders, and it is well known in this image. In addition, in this embossed role, you can also see beautiful details. Earrings can view as circles with a small orb hanging on, a necklace engraved in the form of a row of pearls and a bracelet used by Ardeshir II.

In the great arch of The Arch of Bostan, various motifs such as hunting, tree of life and musicians can see. Also, the large vault has carved images composed of several parts. Besides, these carvings have dimensions of 7.5 meters wide, a height of 11 meters and a depth of about 7.5 meters.

Moreover, in the entrance section of the vault, beautiful lithographs that are engraved with images of winged angels, the tree of life, part of the scenes of birds and boar hunting, catching skunk fish. Also other things can see like carved faces of animals such as elephants, horses, as well as roles from different boats, will all represent the joyful meetings of the Sassanid kings.

Besides, the government of men and people of that era, which crafted by the tastes of Iranian masters. It’s become exciting. Behind the vault are two prominent images related to the hunting scenes. Deer and boar hunting scene, each of which has considerable characteristics and characteristics.

According to architectural experts and archaeologists, it seems that the creators of this monument have also carving the hog hunting scene into a frame of 4.13 meters and a length of 5.7 meters. Also, in the left part, there are 12 elephants located in five vertical rows, pictured with two mounts on each.

Earlier, the image of armored horseback riding in Taq Bostan, Kermanshah, mentioned. Of course, the identity of the rider, seen at the bottom of Khosrow parviz’s coronation image, is unclear. Also, but different possibilities mentioned about it. In addition, some archaeologists consider him a warrior, others consider it to belong to Khosrow Parviz and some consider him the victor of Sassanid.

In the 19th century, a prominent inscription written by Muhammad Ali Mirza during the Qajar dynasty in the Taq Bostan complex in Kermanshah, which is a great pity. Also, these manipulations have caused many damages and damages to this great and wonderful collection of ancient Iran. Besides, in fact, the disharmony and worthlessness of the image of the statue of Muhammad Ali Mirza (son of Fath’Ali Shah Qajar) is such that Nasir al-Din Shah writes in his travelogue:

Two inscriptions remain in pahlavi line in the small arch of Boston’s, the small vault builders of the Taq Bostan complex consider this section as a rectangular space with a height of about 3.5 meters, a width of 5.9 meters and a depth of 3.8 meters. Also, on both sides of the entrance section, two jars can see as quadrilles with a height of about 3.7 meters and a width of about 9 cm.

There are also 13 rows in the written stone belonging to Shapur III, which means: 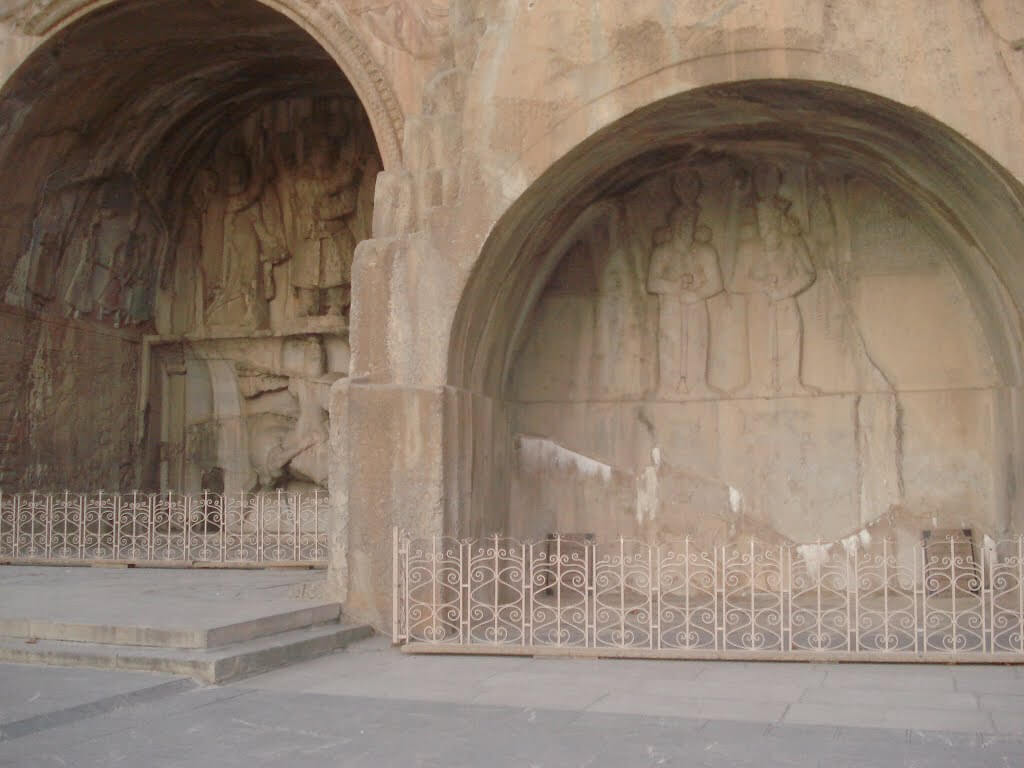 Damage to the Arch of Bostan

According to quotes, it appears that a carpet composed of the jewel of the Taq-e Bostan floor was wide, which unfortunately divided among Arab leaders as a war booty at the time of the Arab invasion of Iran. Moreover, the rape and attack on this amazing historical complex has taken place over and over again, causing a lot of damage. Also, especially during the presence of Stalin and British forces, many destructions and damages have inflicted on the Taq Bostan corpus of Kermanshah, which is unfortunate.

Moreover, despite all this damage, one can still clearly see the magnifies, grandeur and beauty of this ancient monument. Also, the Qajar inscription of Muhammad ‘Ali Mirza, in turn, has damaged this magnificent carving of antiquity. So, natural factors such as cracking the arch walls due to ground drift, over time cause water to penetrate and accumulate moss, resulting in the fading of part of the motifs of these arches.