Did you make your decision and chose Iran as your travel destination? We want to talk about Sheikh Lotfollah Mosque for traveling to Iran. Travel to Iran to get to know about it. Are you interested in experiencing that? what do you know about Iran destination tour one of the most famous Iran travel agency in shiraz and also Iran? This is great and you can be sure that the most exciting experiences will be waiting for you. In this article, we introduce all the requirements to travel to Iran. Also, the do and don’ts of traveling to Iran. Also, we answer this question: how to travel to Iran.

Sheikh Lotfollah Mosque is one of the mosques in Iran, which is amazing and spectacular due to its unmatched decorations and excellent architecture. Also, the mosque located in Naghsh-e Jahan Square in Isfahan. So, you can visit other attractions of this square, namely Imam Mosque, Ali Qapu Palace and Kayseri Head. Besides, Sheikh Lotfollah Mosque built by Mohammad Reza Esfahani  is a unique masterpiece of tile art and architecture.

Moreover, the use of beautiful colors and natural light have changed hands to make this mosque famous and popular with domestic and foreign tourists. Also, whatever the wonders of this mosque, you will not understand its beauty until you closely observe it. Besides, before traveling to half the world and recovering from Sheikh Lotfollah Mosque, you can find out more about this eye-catching work by reading this article. 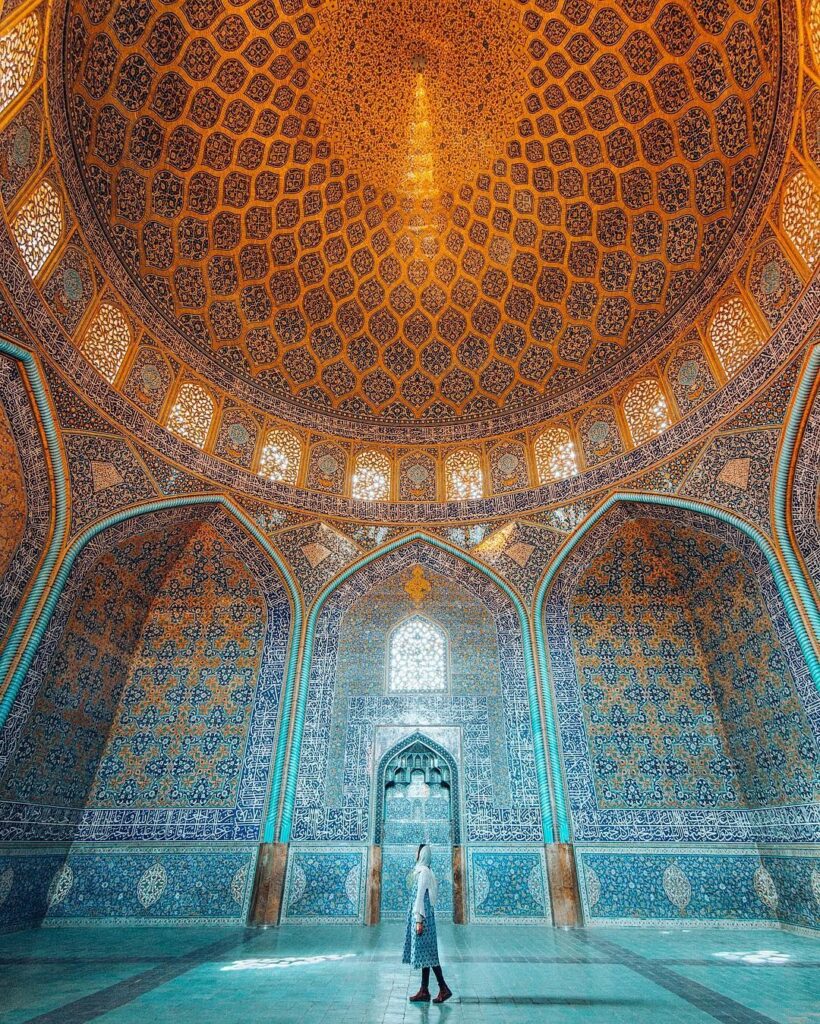 Sheikh Lotfollah Mosque, located in Naghsh-e Jahan Square in Isfahan, placed on the national monuments list of Iran on January 5, 1932. Also, it displays the most beautiful and best manifestations of Safavid art with its architecture, tiling and extraordinary decorations. Besides, this magnificent monument, which is one of isfahan’s landmarks. In addition, it has showing off for centuries in front of the Ali Qapu Mansion and the eastern side of Naghsh-e Jahan Square and attracts the look of every domestic and foreign tourist.

Furthermore, Sheikh Lotfollah Mosque located in Isfahan city and the famous Naghsh-e Jahan Square. Also, it is so famous that you can easily find it. Besides, visiting hours of Sheikh Lotfollah Mosque, In addition, Every day except during noon prayer, in the first half of the year from 9 am to 12:30 and 14 to 17 and in the second half of the year from 9 am to 11:30 pm and 13 to 16:30

Isfahan was the capital of the Safavids in 2013 and at the height of the development of constructions such as Chaharbagh Street, Naghsh-e-Jahan Square, Imam Mosque, etc. Also, it was during this time that Shah Abbas ordered the construction of the Sheikh Lotfollah Mosque.Thus, the foundation of the new mosque laid on the ruins of the mosque located there.

In addition, Mohammad Reza Esfahani assumed responsibility for the construction of the mosque. Also, which was able to build an amazing building within 18 years. Besides, Sheikh Lotfollah Mosque was exclusive to Shah Abbas and the royal family, and ordinary people not allowed in. Also, it seems that Shah Abbas worshiped in this mosque every day from the opening of the mosque in 2019 until the end of his life.

Who is Sheikh Lotfollah?

Shaykh Lotfullah was one of the largest Shiite scholars living in the Jabal A’aman area in present-day Lebanon. Also, he came to Iran at the invitation of Shah Abbas I, along with some Shiite elders, to live in Iran. Furthermore, Shaykh Lotfollah initially went to Mashhad and studied in the presence of great figures such as Mulla ‘Abd Allah Shushtari and eventually chosen to serve in Astan Quds Razavi. Moreover, he went to Qazvin to teach there.

According to his devotion to him, Shah Abbas ordered the construction of the mosque to be a place for teaching, teaching and performing prayers. Also, Shaykh Lotfollah performed Friday prayers at  Mosque. Besides, until he fell ill in 1035 AH and bid farewell to Fanny in Isfahan

The architecture of Sheikh Lotfollah Mosque, which is isfahani-style, displays a corner of the genius of Isfahani architects. Also, especially its dome considered the most circular dome in the world and one of the most beautiful domes in the world.

In addition, one of the interesting things about the mosque is the lack of an entrance nave in it. Besides, in fact, in all mosques, you have to go through a series of stairs. Then, enter an entrance courtyard that will take you to the dome space.

Moreover, what happened in Sheikh Lotfollah Mosque is the absence of this courtyard.Also, entrance nave that aimed at observing the principle of symmetry in Naghsh-e Jahan Square. Besides, since the mosque located in front of Ali Qapu, it was not possible to place a courtyard or courtyard facing The Front.

Furthermore, in the design of the mosque, the golden ratio used to fit the components of the building. Besides, the position of its main nave in relation to the entrance of the building determined by geometric methods. 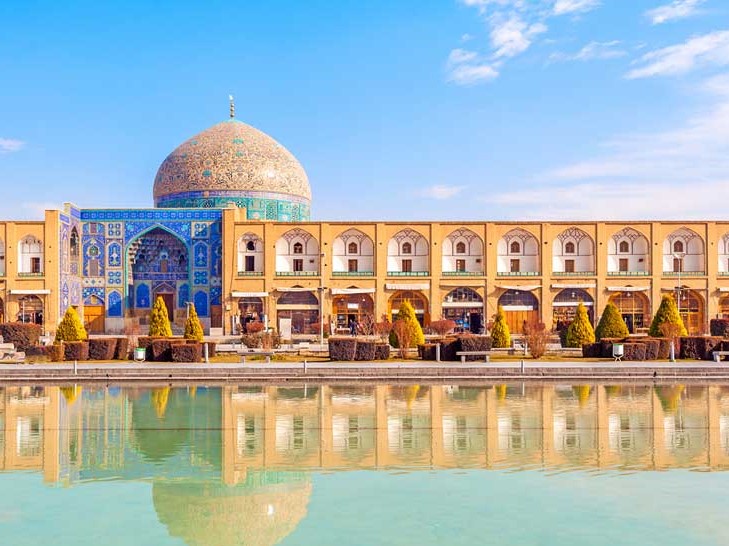 Why does  Mosque not have minarets?

One of the issues that draws attention to  Mosque at first glance is the lack of minaret. Therefore, it distinguished from other mosques in the Islamic world. Also, because minaret is an important part of the architecture of mosques. Besides, the minaret’s function was essentially used before Islam to routing buildings, indicating the existence of a city.

In addition, after Islam it became a sign of the existence of a mosque and a place for the adhan. Aso, given that the mosque built by Sheikh Lotfollah solely to worship. Besides, the Shah and his family and not used by ordinary people. So, there was no need to build a minaret for it. Therefore, this magnificent and beautiful mosque less noticed by tourists. Consequently, remained unknown compared to other places of sight in Isfahan.

Moreover, paying attention to different angles in safavid designs is very interesting. Also, especially in the architecture of Isfahan city, which can seein the lack of minaret for  Mosque. Besides, which has practically separated the court families from the general public.

The magnificent dome of Mosque joined by two shells, with a height of about 32 meters above ground. Moreover, a span of 12 meters and an outer diameter of 22 meters. Also, it is lower than the dome of other mosques. Besides, it is undoubtedly more difficult to build than conventional domes. So, the architect built the walls adjacent to the dome in order to wither the heaviness and pressure of the dome.

You can visit this place through the following Iran tour  offered by Iran Destination, Iran Travel Agent: