Saryazd Village, Yazd province is one of the historical towns of that component, the first city Adobe registered of Iran and the second historical city of the world at the World Organization UNESCO has registered it as an international city, be remembered. Yazd is famous for the city of Windward and aqueducts. And in the corner of the city can be watched history and enjoyed drowning in its beauty.

We wants to talk about the historic village saryazd title fifth Tourism Village and masterpiece of urbanization of ancient Iran. Continue along with us on a trip to Yazd province to describe more about the saryazd village.

According to studies conducted by archaeologists in this area. And studies on pottery in that area have also found that the village during Seljuk, ilkhanid and Safavid thriving during its time has been. Based on the historical texts that there are experts of Archaeology. Also believe that before the city of Yazd far have come on.

the premises of another in the near Saryazd there with that name Farafer. And after the drought and the war with the army of Islam, also from boom is. After that, the people of this region build their city in Yazd. It is likely that the villages of this region, like every week and sryzd, the remainder of it are Abadani.

The remains of the high and high gates located in the village of saryazd. It known among the people in the city of farafar. In historical books, there is also a comprehensive useful in this regard: when the Islamic Army followed Yazdgerd who had fled to Khorasan, they lost their way in the desert of Tabas.   After much hardship, they came to the fahraj and settled in it and invited the people of fahraj to the religion of Islam.

He asked for two days to served and overlooked by his friends. In order to consult the people of the pig and sent beyond and after the community, the two sects responded, they said, ” We do not give up our religion and we are going to shabkhun this distraught Army.”  Then 3 villages attacked each other to the Islamic army and many companions and citizens to martyrdom. After this hideous move, the wreckage in the village overpowered and broke down. 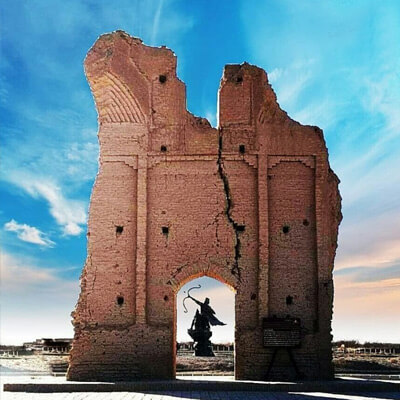 In order to get to Saryazd village, you need to enter Yazd – Kerman highway. It turns left by visiting the village panel, it is also the village of Mehriz city functions and to get to this village you need to go to this city.

Approximately 28 kilometers from Yazd City on Yazd – Kerman road to the south, four kilometers after Mehriz city, you will see the Saryazd village tableau on the left. One or two kilometers to drive on the side road, pomegranate gardens are a sign of your arrival.

The village Saryazd in the past as one of the areas lush and Abad, Yazd is famous is due to the drought, numerous that this region has emerged caused the villagers gradually less and less are now this village of about 400 of the population. Interestingly, more than 65 percent of the villagers educated and literate. 45% of the economic activity of the village based on agriculture and horticulture and animal husbandry often done for domestic and personal use.

The rest of the people in the industrial and service sectors. And the women of the village engaged in weaving rugs and carpets. Adequate water, suitable soil and favorable weather has caused the creation of fruit gardens and farmland in the village. The most important crops and horticulture can be wheat, barley, Jat, pomegranate, figs, Berry and pistachio noted.

For tourism in the village Saryazd three cultural, natural and historical options ahead of you. It depends on yourself which one to choose.

In each Rural City, there are certainly different rituals and rituals that determine how to live in each city and village. To be in the village, Muharram, and the weddings a little differently held, and many people throughout Iran and even from abroad to see the ceremony of mourning the village of Saryazd to the village travel. In fact, they perform an action and purpose with the native culture and traditions of their region.

The way of life and livelihoods in the village Saryazd, how to publish, ceremony, the magnificent caliph, in the mosque, types and Method to cook a feed, story and Legend, of place and Customs, because the concepts and contentment of the people desert, etc. is unaffected, being the … of friendship, love and… the most important concerning the attraction of Allah and that he, the village should be. Including the ceremony, that in of Muharram, villagers held the words of the ceremony. The welding period and the like Of Paradise. And palm stars in the world  all been as an attraction of cultural in the village, it raised.

The residents of the village are happy and hospitable enough.  When you leave the village you want to get depressed for a week.

Natural attractions in the village Saryazd there, such as mountain Medora and springs full of water, and also aqueducts, numerous that are now blue in it, but as an attraction of tourism from its operation.  The spring water that we said during the water such as a river from the village of the past but now no trace of it. And the aqueducts took its place, which considered as the natural attractions of the village saryazd.

Another natural attraction of this village is its proximity with the expression of Yazd-Kerman. It is a great option for those who are interested in desert walking. At a small distance from the deserts, these lush transitions and alleys of cool gardens with a water river in the middle of the Che pleasant. The silence and solitude of the night and the eye-catching lights of the stars are undoubtedly a sign of the greatness and magnitude of God in the endless sky of the village.

As we said, this village has been one of the most important areas of Yazd. It locates in the local past and has a long history. In the past, the village run as a master – farmer and this ineffective in the construction of houses. More than half of the residential units of the historic village. But nearly 25 historical houses have architectural and cultural values. In most of the old and abandoned houses of the village, there is a sign of life and life. Often these houses separate courtyards with presents and decorations are beautiful and magnificent and Windward, pond and sash types (colored grille) see in most of them.

According to the surveys conducted in this village. Saryazd village has been one of the most important caravan stations on the route of Ray and Kerman. This ancient way has also changed from the lower neighborhood, which  call the bottom ten, to the north of the village, and now nearly 3 kilometers to the southwest. There are two caravanserai in this unique collection of chaparakhaneh, water reservoir, Jame Mosque, Hosseiniyeh. Of course, until a few years ago, there was a stable next to the caravanserai of Shah Abbasi. It is now buried underground due to streets.

One of the most massive and beautiful defensive castles located in the central desert of Iran. And in the village of saryazd is saryazd Castle. According to many experts, the core of this castle is related to the Sassanid era.  In the Safavid period in 3 floors restored.  Saryazd Castle is actually the first bank in Iran that  built in the Sassanid era.  Because it is on the Silk Road is very important. Round to round the castle, a deep moat has been dug, of course, the cause of this moat is also to protect the castle, which is either poured water or lit fire, to stay safe against the enemy.

In the castle goes up and down by a pulley. And when you raise it you face one on the other. The only way to enter this castle is because it has only one door. On top of this, in the cavity there is a great possible when visiting them, you question God, they Why in it are high, etc. It is interesting to know that the people of Yazd thought everywhere had the holes for this is that if one day thieving or burglary. It able to enter the castle of the holes of boiling water on them responsible. 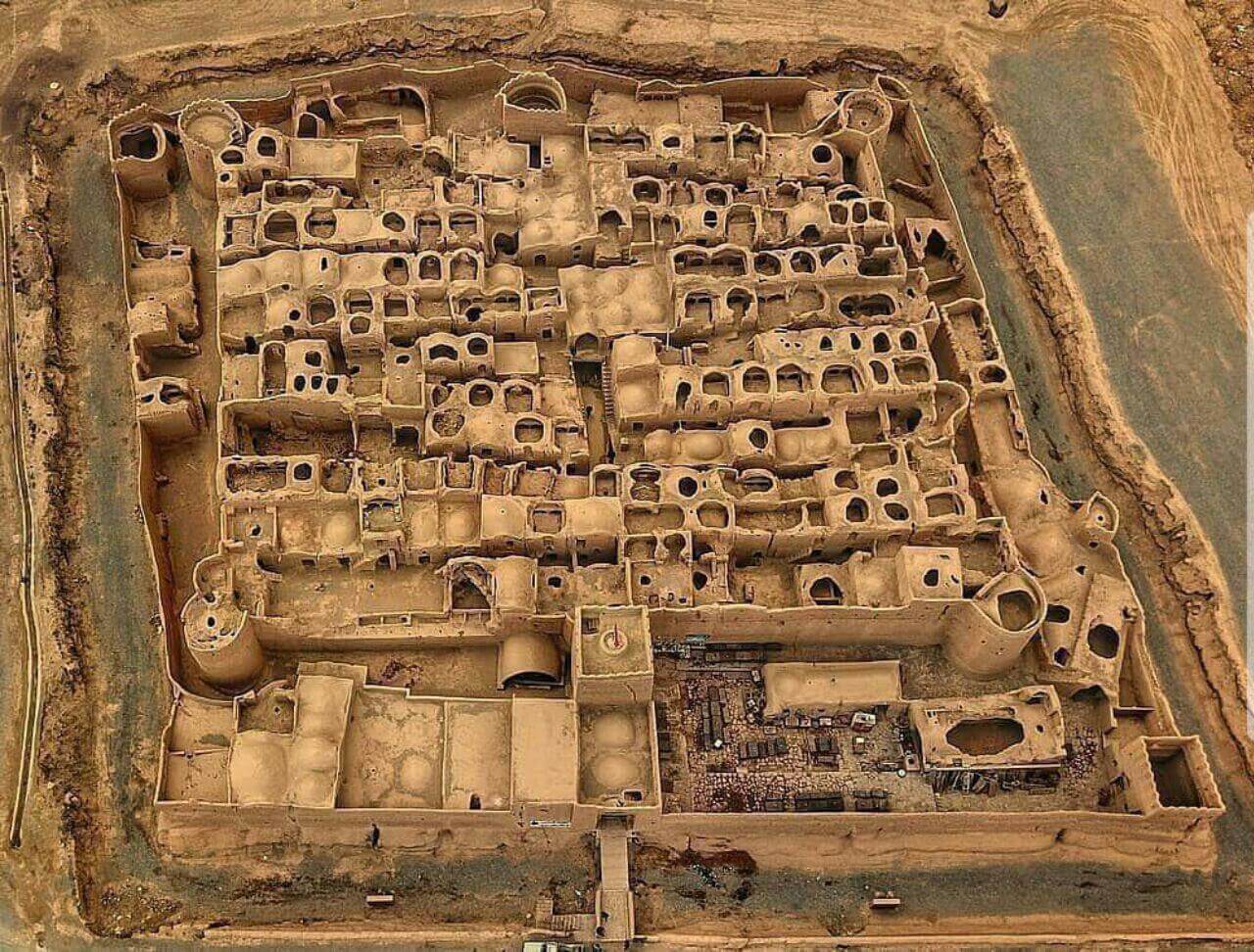