The center is one of the most interesting attractions of Iran, the hot springs in Sarein! Sarein is one of the most popular tourist destinations in Ardabil province. Spectacular issue, and whatever it is it should see in the distance 30 kilometers from the city of Ardabil is located, which nowadays has become one of the poles the undisputed tourism industry in this province has been.

The warm water of the city, where they are, and. best time to go to the issue when there is and distance from this city to Tehran and Ardabil how much is there for you to examine.

In a concise explanation and useful have to say that the issue as one of the most famous tourist areas in Ardabil. It known to be the first factor after having the hot springs are very abundant. In this city, there are more than 9 hot water. All of which have mineral origin, which draws a lot of travelers and clients annually. Geographically, Sareyn is located in the west of Ardabil. And in the center of the city of Ardabil, and its altitude is 1650 meters above sea level.

In terms of Anthropology and culture, form community, the issue have to say, that in the sub-culture community of the people of Ardabil City fall, and in the literary masterpieces of Iranian Azeri role to the Earth, and the very important role played have. Predecessors known Sarein as saraiyan and Sari, but do you know the meaning of the current name of the city? Sarein (meaning originated) serine Turkish word meaning cool.

On your trip to sarein you can find souvenirs such as:

Prepare and enjoy it and especially its delicious food. 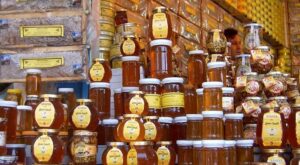 Where are the sights of Sarein?

Sareen’s sights are not low and incidentally very high. Sarein because of its beautiful and lush nature has areas that drag nearly 2 million people from different parts of the country or maybe even abroad. We want to introduce and review some of these attractions for you.

Alvares village in Sarein, a piece of paradise on Earth!

The village of Alvares Sareyn as one of the coolest. And of course the lushest places in the city is introduced. The lush village of Alvares is located at a distance of 12 kilometers and on the western side of the city and has a history of nearly 3 thousand years. In order to describe this village and its nature to you we suggest you close your eyes and imagine this scene:

In a very green environment with cool and very clean air. And around you a lot of springs that originate from Sabalan, current. Even in one of these springs called rhyme, Salmon sees red tulips, marshmallows and anemones in the wind breeze and dancing around you.

These are not metaphors that we told you, but are exactly the natural characteristics of this village. In the meantime, do not forget that on your trip to the village, be sure to eat from the lavash bread of the village of Alvarez and their milk and honey. Be sure to bring woolen socks, jajim and kilim as souvenirs. Of course, it is important that in this section about summer trips, we refer you to the most suitable cities for summer trips in Iran.

Shayegh, a village that can become one of the most important attractions of Iran!

In 7 kilometers of Sarein, a village called shayegh, which is very lush and beautiful. The village is so spectacular that not only today it has the potential to become one of the most famous attractions of Iran.

The name of the village is taken from a family of the same name that they have lived in for 250 years. From the sights of the village, we can slaughter Lor Hill C and Zal Hill C. Remember that you can easily access the ski resort and the village of Alvares from shayegh village.
Anahita Hill, an area with ancient dating

One of the sights of Sareen, which is incidentally an ancient and historical place, is the ancient hill of Anahita. Based on the excavations that have taken place in this area, The Hill dates back to the Saints of the first millennium and also the second millennium Milad. In this ancient place, there are also found items that confirm the historical status of this place.

Near the village of Alvares and right on the slopes of Mount Sabalan and in the 24-kilometer sarein ski resort Alvares is located that these days. Its become one of the spectacular issue, and the major attractions this city has become. Of course, along with this resort, its natural and human attractions such as the nomadic nomadic migration. It is a very important feature in it.

Feature that tracks Alvares compared to other ski country special is the fact that more than half the year. And in the best case, up to a maximum 8 months the resort covered with snow. And it is possible to ski on most days of the year in which a lot more than other tracks in the country. 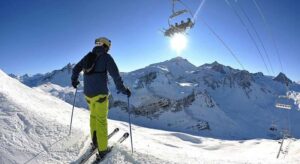 Cliff houses in the village of wind kalkhoran

On the way to the road from Ardabil to Nir an ancient village. It is located up to 5 km from the south to the southwest of the city and the village is completely Rocky! In this village there are houses built in different periods of Sassanid, Parthian and post-Islamic period. Evidence in this area has been obtained that people have lived in this village until the Safavid period.

Village, this mother or the village of atashgah is one of the most historic. And, of course, the most famous attraction, the spectacular issue is that on a trip to this city must see it, the issue the actual familiar. In this interesting village, there is a historical and ancient fire temple of Azar Fariq and imamzadeh Abdullah. Of course, it is worth mentioning about the fire temple, which today is not left but traces of ruins.

Azarfiriq fire temple in the village of atashgah Once Upon a time has been one of the most important centers of Zoroastrian religion, especially in the Sassanid period. About the village of atashgah it is important to know that on the hill that the remnants of the Temple Of Azarfarigh. There is a cave called Kehl ler, there is, of course, someone also into it, not expected.

From other sights Sarein can to:

Where are the Sarein hot water?

Water sharing issue the first factors, the reputation of the city people were as always on this is that the Hot Springs, the most important attractions of the city. About this exactly a few springs of water in this city, there Number, detailed hands, but something that very clearly. And it is known this is the case, that more than 10, The Fountain of boiling water and water in the city and around there, which today is one of the spectacular issue have become.

These hot springs originate from Sabalan. It is from the very high mountains of Iran in the northwest of the country. Now that the letter is Sabalan, we should note that this mountain is one of the 3 high peaks of Iran. With this that bothered you with the most reputed ATV around Iran. But we continue some of the most famous water Town issue. We will introduce you to WE and soon in a more distinctly to complete the fountain, the introduction of will.