Qeisariyeh Bazaar , one of the most popular markets historic and beautiful places to Isfahan is to market Shahi also has a reputation, the market gate of Qeisary, began to market Chitsazha and from there to the market Darolshafa. Bazaar is one of the famous centers of handicrafts. The market is one of the largest and most luxurious shopping centers in the Safavid era. In general, the indoor market of Isfahan is a few kilometers long. Also, each part of which special goods produced and sold. The great Bazaar of Isfahan, which is part of the Qeisariyeh Bazaar, had different entrance doors.

Isfahan is one of the most tourist cities in Iran. It has many historical and spectacular monuments in its place, and since the city is old. It has many historical masterpieces. This city, in different ages, mother rule of the Kings, especially the Kings of the Safavid been and result in more buildings historical importance of the city related to the era of the Safavid is, buildings architecture which every tourist to the astonishment leave. For all these reasons, every year, many domestic and foreign tourists visit this city and admire its works.

In the Safavid period, Qeisariyeh Bazaar has been a center for selling precious fabrics and carpets. And foreign business companies have their own rooms. This new Isfahan market connects the Safavid period to the Seljuk city of the old square of that time (current Uprising Square). In this Bazaar, there are shops from 400 years ago to today to supply only one type of goods. Along the great market of Isfahan, it leads to a comprehensive mosque and then to a naked market.

The Head of Qeisariyeh Bazaar

In the Qeisariyeh Bazaar , located north of the imam square, it erected from 1011 to 1029 ah.  And represents one of the most exquisite paintings of the Safavid era. The portico of the it , in front of the mosque Citadel in the North Field, the role of the world. The head arched shape with Tiled sumptuous and magnificent paintings blighted Safavi visible is that the input Bazaar considered. The head market Qeisariyeh input magnificent and Noble Naqsh-e Jahan Square. Also, That is the best sight and spectacle to the field, given that at the time of the Safavid field crammed the city after the transition from the Market Square to a new city, the connection status is.

One of the Globetrotters who has spoken about Qeisariyeh’s headquarters is Italian Pietro Delaware. He described this as such:

There is a beautiful landscape on the side of the market that the symmetry of this mosque is the Abbasi Jame Mosque, along with two high halls built on the pavilions.

Considering the fact that all the authors of the Orient in determining the Taal towns through Tanjim very precise act.  And, they constructed Isfahan at the peak of the Tower Arch, determine a trend of the mark of the towers on the portico of the palace. And the market cress to image development. Of course, Orientals, it’s like us and form, half human half horse painting not, but for half human and half tiger drawn in.  And, a tiger that has Demi has the form of serpents, which, half-human towers, arches, Thierry towards the mouth of it, a sign taken. About the appellation of Qeisariyeh obvious thing is the name of this Portico, from the name of the Bazaar is the immediately after the gate starts and Chitsazha continues. It said that Caesar is derived from the word Qeisariyeh. 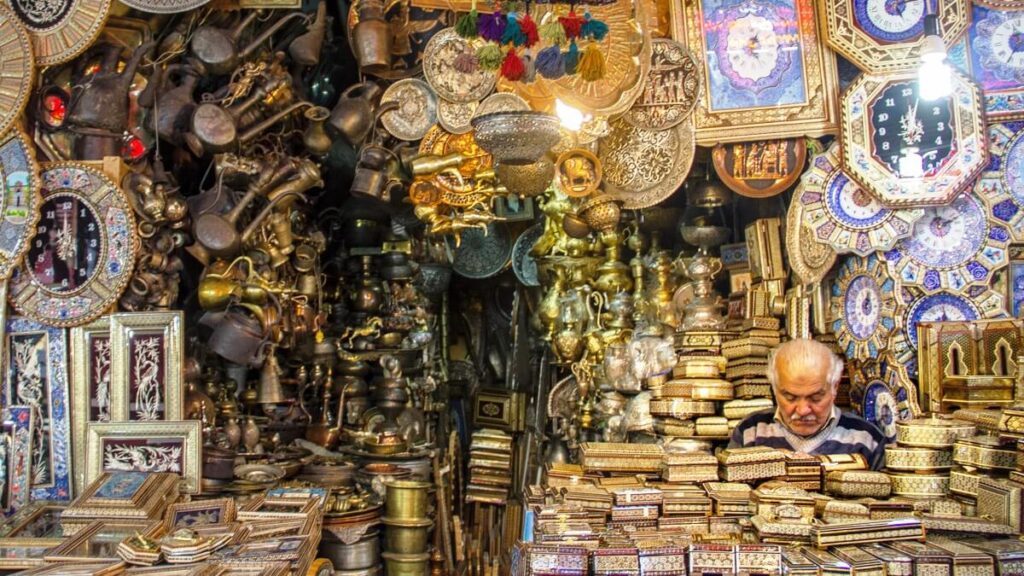 This Bazaar is one of the largest in Isfahan. In the middle of the Bazaar, landscaping large circular mother and her children is The Arch beauty in the West Caravansary magnificent.  Further, Shahi is two-store and distribution almost 150 apartments. Moreover, In the East, the market is a mint, which is now a trade center. In this Bazaar, like the Old, various fabrics and Calico, Esfahani etc.

This is one of the most famous and famous bazaars in Iran. Also, It encompasses various sectors. At the same time, that certainly know from souvenir, Isfahan, crafts, interesting and spectacular. It is really each and every tourist in your journey to this scenic city have it, bought it.  And certainly of the best places in the city of Isfahan to buy the crafts beautiful. It is the same market, Qeisariyeh Isfahan.

Consequently, The Bazaar built on two high floors, dedicated to office and Commercial Affairs upstairs.  And on the bottom floor, shops of various guilds stationed together. From this large and luxurious Bazaar, other markets  divided, and some active and dedicated to different jobs.

Moreover, The interior ceiling of the entrance of the tiles in the color of brick, flower and serum. It is very colorful with the designs of mugharnas, which is very attractive. After the ceiling, we get to the walls of this head, which has eye-catching paintings.

Qeisariyeh Bazaar, More about the Bazaar

The wall facing Shah Abbas’s war with Uzbek people shows. The walls of the right side indicates the Europeans are dancing and singing, and the walls of the left Shekargahi portrayed. With the passage of all these years, and of the parts of the paintings still being alive colors and beauty preserved. In the time of the Qajar dynasty in Once Upon a time that Masoud Mirza Zell Al-Sultan and Ruler of Isfahan was on the fronts of Caesarea changes took place.  And a margin of tile along the lintel added.

Also, Tourists famous like the artistic elements and Chardin to describe the market.  Qeisariyeh has the meaning of this market to the similarity of the monument to Qeisariyeh  in Asia Mino shape.

Above all, Bazaar be on the gate of the estuary (of the sun). It is one of the four gates of famous Isfahan at the time was in the season of Nowruz (people). Also, Isfahan, with a variety of eating and drinking and machinery, and implements, the other is two months in that place, to have fun, and mirth, and left me alone, and hands for the need of this population from the deli., the sarees etc  established and considered , Taqwa, all kinds of there round Lord.