Milchsuppe is a meal infused with folklore, not least because of its association with Switzerland’s very formation.

Some mornings around 08:00, after reading the daily prayer at Kappel Abbey in the canton of Zürich, retired pastor and part-time historian Susanne Wey-Korthals steps from the recess into the Alpine air, crosses the cloister’s Gothic courtyard and looks across the undulating meadows to the spot where Switzerland was born.

From the overgrown pond in front of the former Cistercian monastery, once known as the House of Silence and Reflection, Wey-Korthals can see the hamlet of Kappel am Albis with its steep-gabled houses, well-tended fields and flocks of pigeons roosting in timber barns. When the weather allows, she then continues across the pastures to a twisted thicket of trees in the middle distance, carefully measuring her steps on the path, to a site of far more historical importance than any visitor would ever realise.

“These fields have played witness to some of the most important moments in Swiss history,” said Wey-Korthals, breathing through the air’s stillness and looking out across the mist-skirted meadow. “Switzerland found a way to compromise here. To concentrate on what we had in common rather than focus on our differences. It sounds remarkable, but we did it over a bowl of soup.” 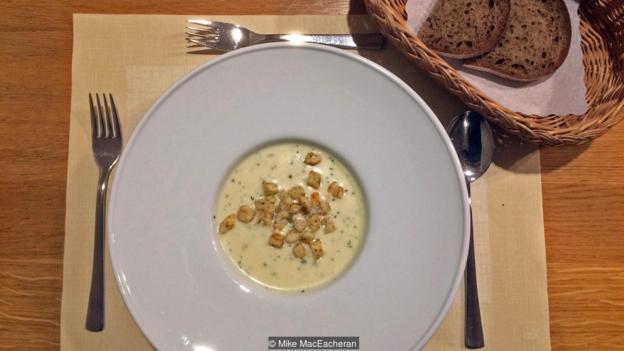 The dish in question is Milchsuppe, or milk soup. Ladled out in Kappel Abbey’s dimly lit cellar as it has been for centuries – first by monks, now by chefs as part of the convent’s rebirth as a spiritual retreat – the mustard-yellow broth is arguably one of the most emblematic culinary delicacies in Switzerland. But while it can be hard to find on menus in many local restaurants, and is largely forgotten in certain parts of the country, it remains ingrained in the nation’s psyche. As much as fondue, raclette or Bircher muesli, Milchsuppe is Switzerland in a bowl.

Straightforward yet scrumptious, the soup was traditionally made with two simple ingredients: milk and bread. Today, it is simmered with Sbrinz, a flavourful Parmesan-type cheese, then topped with a sprig of parsley. Once the staple of peasants, the recipe has been dictated by history, its essence packed with meaning – from the ingredients first supplied by warring cantons to the bread that floats on the surface – shaped over the years so flavour can be dispersed into each slurp. But as moreish as the dish is, it comes with an even more delicious backstory. 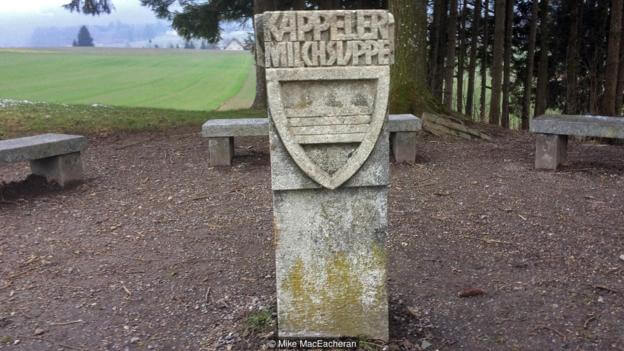 No-one in Kappel am Albis can recall exactly how the soup came to be – or the true ingredients used when it was first made in the field near Kappel Abbey. But there is one story on which everybody agrees: the broth was created by accident in June 1529 when two hungry armies met on a battlefield on what is now known as the Milchsuppestein, or ‘milk soup pasture’. And it’s a meal that’s since played an outsized role in Swiss history, becoming a modern-day symbol of diplomacy and reconciliation.

During the Swiss Reformation in the early 16th Century, the Milchsuppestein marked the turbulent frontier and dividing line between opposing Protestant- and Catholic-leaning territories. To the north was the Protestant-favouring canton of Zürich, led by Martin Luther-like reformer Ulrich Zwingli, a parish overseer who was spreading reform. To the south was Zug and the allied Catholic cantons of the Old Swiss Confederacy, who felt their rural union should remain aligned with the Vatican and Rome. Schism and distrust was rife, and come summer 1529, diplomacy between the two cantons had failed. Zürich’s soldiers, kitted-out with armour and pikes, marched south to war.

“Negotiations continued, but to the amazement of everyone, the infantry brokered their own truce over a cooking pot while on the battlefield,” said Wey-Korthals, eyeing the spot where the first inter-cantonal battle should have seen bloodshed. “Naturally, they were hungry after the long march, and Zürich had plenty of bread and salt, while Zug had a surplus of milk from its farms. From that the legend was born.”

Nothing could ever be that simple, of course. Tensions remained, leading to the Second War of Kappel two years later when the opposing cantons once again took to the battlefield. But the mythology of the soup had already started to stick, and it has proven to be a catalyst for Swiss diplomacy ever since.

“Nowadays when politicians or councillors have disputes it’s still served,” said Wey-Korthals, leading me to a stone-cast memorial marking the site. “It’s even been reclaimed by the right-wing SVP political party, who use it as a symbol of the Switzerland they champion. All countries polish their history a little, and we’ve done the same – we’ve turned the soup into a national icon.”

To dig a little deeper, I headed north to Zürich to see where the Milchsuppe story would lead. Names like Ulrich Zwingli are bound to the city’s history, and his name can be spotted on Zwingliplatz at the Grossmünster, the twin-towered Protestant church where Zwingli worked until his death in 1531. Here, in 1519, the firebrand became pastor, energising the Swiss Reformation movement.

But religion aside, Zürich’s renaissance spirit is enough to entice those without the slightest interest in the Reformation. And what appealed to me was not to be found in the Grossmünster or its sister church, the Fraumünster, but tucked-away inside Zürich’s temple to fine art, the Kunsthaus. Much of the city’s history is displayed on canvas in the museum’s expansive galleries, and this is where the Milchsuppe story picks up.

“Follow me,” said conservator Tobias Haupt, as he swiped a series of card-readable doors leading from the public atrium through a corridor stacked with packaged crates into the off-limits restoration department. “This hasn’t been loaned out for half a century and is on its way to the Swiss National Museumfor an upcoming exhibition. But you’re in luck – it doesn’t leave until tomorrow.” 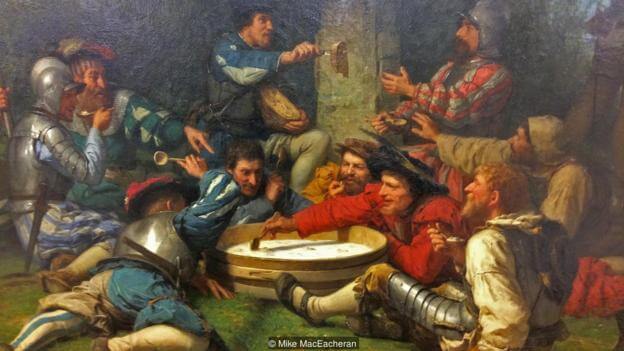 A few strip bulbs on the ceiling were enough to illuminate the reason for my journey: Swiss painter Albert Anker’s national treasure, Die Kappeler Milchsuppe (The Milk Soup from Kappel), from 1869. Up close, it shows a meadow-turned-soup kitchen, home to a tangle of peasants who have swapped maces and heavy pikes for dagger-cut bread and wooden spoons, shared across enemy lines.

“This is such an important artwork for Switzerland, but also for me,” said Haupt, reflecting on Anker’s most famous painting. “Believe it or not, but I was married in the Kappel Abbey, with my family coming from Germany and my wife’s from India. Neither of us knew the backstory, but we ended up eating the soup on our wedding day. It was so magical, and that’s why I’ll only ever eat it once.”

As a window to the past, both Die Kappeler Milchsuppe and the Milchsuppestein feel hardly in the spirit of the romantic oral history. But as Zürich faces the major anniversary of 500 years of its reformation in 2019, still considered one of the most influential events in the country’s history, the Swiss would do well to take a moment to see how far they’ve come. For as arbitrary as the milestone may be, it remains a date woven into the very fabric of Switzerland. Just as surely as the soup.

And to think it all bubbled over in a field over a bowl of bread and milk.