During Nowruz holidays, most of the southern cities of Khuzestan took an interesting initiative and at the entrance of their cities have set up and constructed an Arabic Mozif. Also, the same place of reception in which they welcome newcomers with a variety of drinks and special foods for the people. Besides, among which Arabic coffee with that particular style and style of its preparation has more considered.

In addition, a traveler from Tehran tells about the entrance of Abadan. Also, it was a really interesting initiative, and we saw their reception Mozif here. Besides, we first met a part of the life of the people of Abadan. Furthermore, we knew that the people of The South Line known for hospitality. 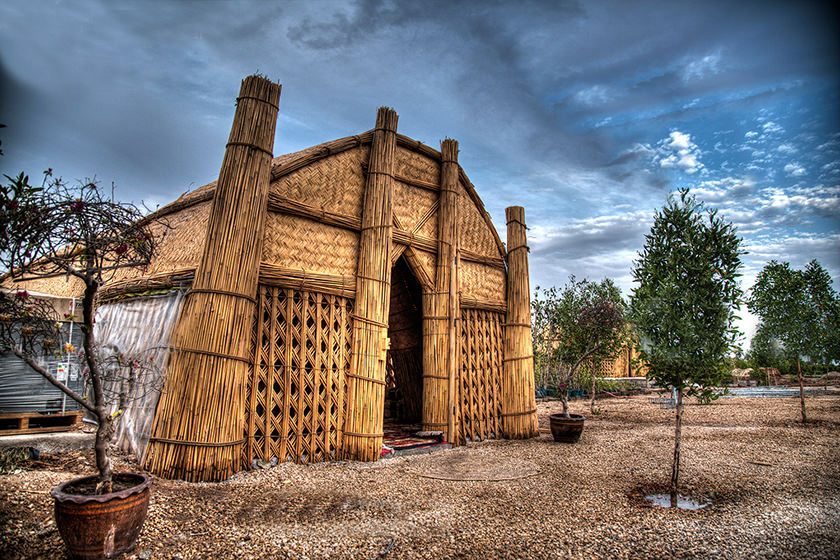 In fact, Mozif has a special respect and status among the Arab people. Also, in a way that it is the same as the sacred places of its own customs. Besides, Mozif structure made of a type of material and a straw to the extent.

Besides, at the entrance, the person who is sitting inside should face the Qibla. Also, the height at the entrance should low. Also, this is because the person who wants to enter the Mozif bends himself in front of those who are sitting inside. So, bends himself in a sign of respect and politeness and then enters. Furthermore, from the first person sitting next to the entrance, he starts greetings and then sets a place for himself to sit.

Moreover, after sitting down, the audience begins to make good time and welcome the newcomer. Besides, after which Saghi Mozif offers coffee to the newcomer. Also, who has his own rituals among the Arab people .

Arabic Mozif next to the symbol of Susa glory

These days, three Arabic Mozifs have constructed in the vicinity of the global work of “Ziggurat Choghaznbil” for the rest and welcome of foreign tourists. Besides, the endowment of this place, which is a symbol of the glory of Susa in the history of Iran. Also, always suffers from the lack of accommodation and catering facilities, has become a better situation despite these three problems.

In addition, referring to the arrival of foreign and domestic tourists to Shush city and visiting the Temple of Ziggurat. So, the existence of a resting place, prayer room or place where some of the fatigue of the casset’s trip in this place strongly felt. Besides, the existence of these three problems would compensate for the shortages.

Moreover, with the construction of these Mozifs, they have created both a shelter for tourists. Besides, by allocating a Mozif for performing prayers. So, they have taken more steps towards the prosperity and development of this valuable building.

Abadan Municipality located at the entrance of the city and next to Abadan Road in Ahvaz. Besides, it has attracted the attention of Nowruz guests. Also, the coffee shop performed almost every day in the municipality. Furthermore, coffee is an old tradition that has respected by the Arab people since ancient times and has its own customs in Mozif.

Moreover, the mayor of Abadan told the reception hall that has registered nationally in the last three years. Besides, it can say to be unfamiliar to the general public of the country and its construction at the entrance of the city of Abadan. Moreover, in order to familiarize the people of the country with the lifestyle of the Arab people of Khuzestan in the past and the way they welcome the guests in Mozif.

The coffee has respected by the Arab people and has its own customs since ancient times. Also, in which Nowruz guests who enter the Arab Mozifs are somewhat familiar with it. Besides, coffee is the first drink that Arabs welcome after greeting their guests. Furthermore, coffee used to accommodate all the poor and rich people and guests.

In addition, if you’re in the audience, make sure that after drinking coffee. Besides, if you don’t want to, you’ll have to shake your cup or you’ll still offer coffee. In addition despite the bitterness, Arab coffee tastes very good and they roast the coffee beans themselves and are very careful in brewing in Mozifs.

How to drink Coffee in Mozif?

At the time of reception, Saghi should offer the cup to the guest with his right hand. Besides, the guest should take it with his right hand and eat coffee without putting the cup on the floor. Also, one of the other rituals of the coffee-drinking ceremony is that the Arab people bend their coffee in front of the guest in a sign of respect for the guest.

Moreover, because of the special taste and the way the coffee prepared or then the distance the guest has traveled. Besides, Al-Sayyaf presented to the guest in case of not shaking the cup. Besides, usually spent by special people and a small number. Also, the guest announces to the sheikh or Saghi after spending the fourth cup that he shares all the joys and sorrow. In addition, in the case of physical and mystical defense of the sheikh or the saghi. So, who after spending that brotherhood treaty between the guest and the sheikh or the saghi.

You can visit this place through the following Iran tour offered by Iran Destination, Iran Travel Agent:

In case you have any questions, requests or suggestions, please feel free to contact our Iran travel agency. We are always available.