Northern Iran is known to the sea and its beautiful and dense forests for most of the inhabitants of the country. International Miankaleh peninsula is one of the most important, pristine and spectacular attractions in the northern part of the country, which is located in Mazandaran province. Miankale is home to many plant and animal species. This peninsula is spectacular in all seasons. But with the arrival of autumn and the beginning of bird migration, this region becomes one of the most attractive areas in the world for bird watching. Join Iran Destination travel agency to see where Miankale is and what its attractions are.

This Peninsula is one of the sights of Mazandaran province. This peninsula, which is located near the city of Behshahr, with its pristine and beautiful landscapes and unique vegetation, attracts the attention of nature lovers. But for tourists and enthusiasts of the environment and wildlife, its most prominent feature is the attractiveness of the bird-watching phenomenon in autumn and winter in this region. In autumn, thousands of species of birds from different parts of the world come to this region. These birds travel hundreds of kilometers and take refuge in Miankale. Flamingos, pelicans and ducks and swans are among the migratory birds. Miankaleh peninsula is one of the pioneering programs of UNESCO. It is also a UNESCO International Biosphere Reserve along with 12 other regions in Iran. Other storage sites in Iran include Arasbaran forest in East Azerbaijan.

Miankaleh wetland is located 45 km from Behshahr, in the southeast of Mazandaran province. This lagoon is located in a narrow peninsula of the same name. This wetland reaches the Caspian Sea from the north and the Turkmen port through a narrow canal less than one kilometer long.

To go to Miankaleh wetland, depending on your place of residence, you must go to Mazandaran province. From the center of Mazandaran (Sari), there are two routes to the lagoon. This routs has a longer route with prominent sights. In a shorter route than Sari, after 56 km and passing through Behshahr, you will reach Miankaleh wetland. In the second route, you must first go to Amirabad port for a distance of 46 km and from there move towards Miankaleh wetland in the east direction.

What is bird watching?

Birdwatching is a fledgling branch of tourism and a growing market in ecotourism. In this situation the tourist, travels to see different species of birds. In this model of tourism, the principle is based on exploring nature and spending time in the heart of wildlife. The pleasure and tranquility of bird watching is a useful and effective solution to boost mood. In Iran, autumn and winter are the best times for bird watching. Because most species of birds migrate to Iran at this time of year. 16th of November has been registered as Birdwatching Day in Iran. Silence is the main requirement for approaching the birds habitat. One of the most important achievements of bird watching is the increase of respect for nature.  Also culture in the field of natural wildlife conservation. 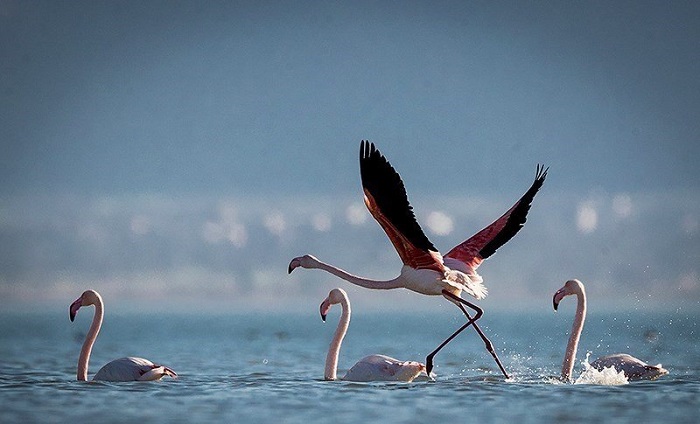 Iran is a land of four seasons, but it has a hot and dry climate. In autumn and winter, the climate of this area is very suitable for migratory birds. Tourists interested in bird watching travel to this region of Iran at this time of year and enjoy watching the beautiful paintings of nature. To visit Miankaleh wetland during the bird migration season, you need the permission of Behshahr Environmental Protection Organization. Water in different parts of the lagoon has different characteristics. As we move eastward in the lagoon, the freshness of the water decreases. At the eastern end of the wetland, the salinity of the wetland is equal to the salinity of the sea water. Different birds choose different parts of the lagoon to stay depending on the salinity of the water in that area.

In the westernmost part of the lagoon is a freshwater habitat. The most important birds of interest in this area are: Great White Heron, Small Egret, Gray Heron and Ducks. In the middle of the lagoon is a saltwater habitat inhabited by birds such as Salim, Talileh and especially Flamingo. The migration period of birds starts from the beginning of September and continues until the beginning of December. During this period, between 500,000 and one million birds spend the cold season in Miankaleh Lagoon. Of course, there is the phenomenon of bird migration throughout the year. But its peak occurs at this time.

The average temperature in Miankaleh is 17 degrees Celsius. And the average rainfall is 700 milliliters. In the lagoon area, there are pomegranate orchards and raspberry bushes next to the dunes. In addition, 179 different plant species have been registered in this area. Miankaleh water is supplied from seasonal rivers. Pomegranate trees are up to five meters high. Also, pomegranates bear fruit in mid-October and raspberries in winter. These wonderful fruits are gifts from nature and have not been planted by humans.

What should we take with us on this trip?

The first thing you need on this trip is a binoculars. A telescope is more suitable for professional bird watching. Clothes in the same color as the environment prevent other tourists from attracting attention and mistakes, so don’t forget to take it with you. Sunscreen, snacks and stay in the environment if you want longer. In addition, take a full meal with you. Garbage bag is a must. Also, do not forget your camera.

About accommodation of Miankaleh peninsula

The best option for staying in this area are the cities around Miankaleh Wetland. In cities such as Sari or Gorgan, there are suitable accommodation spaces with full amenities. There are also indigenous and local resorts in the surrounding villages. You can join our team, Iran Destination, and get more acquainted with this beautiful peninsula Iran. Iran travel agency, Iran Destination, will organize your trip to Iran. You can offer your tailor-made trip to Iran or visit our programs on the Iran tour page. You can contact to our Iranian travel agency, our agents are online to answer all your questions.