One of the attractions we want to talk about in this article is Meybod Chaparkhaneh. Also, the monument dates back to the Qajar era and was also a way to relax government chapars. Besides, Meybod city is one of the historical and beautiful cities located in Yazd province. In addition, it has many historical buildings and textures.

Moreover, the primary foundation of Meybod city dates back to the ancient period of Iranian history. Also, this is an unparalleled example of the ancient cities of Iran, which are home to many ancient urban phenomena and ancient remnants of Iran.

In addition, this complex has constructed along the ancient road of Ray Kerman and next to Meybod Caravanserai. Besides, in Meybod Chaparkhanehs, a number of horses and fresh couriers kept to use to send and exchange letters and loans quickly.

Therefore, the Meybod chaparkhanehs built as fortresses that defended and protected. Also, this importance found from towers and high walls, observation and shooting or good defensive position. Besides, this security is one of the most important features of this chaparkhaneh.

A Brief History of Meybod Chaparkhaneh

The history of the construction of chaparkhaneh in Iran is back centuries before Islam. Also, Hervedt and Xenfon have provided some explanations.

Besides, Hervedt: In homes, fast horses are provided. Also, in this way, Chaboksavars has taken government writings from the centers to the nearest chaparkhaneh. Besides, the chaparri he is present, and he immediately moves. Moreover, it moves to the second chaparkhaneh and surrenders it again. In addition, in this way, the chapars move day and night, bringing the orders of the center to the states. Furthermore, about the speed of movement of the chapars, the historian says that it is not possible to imagine a moving creature faster….

Moreover, Xenfon: The establishment of chaparkhanehs attributed to Cyrus the Great. Also, it says that to determine the distance of the chaparkhaneh. Besides, they experienced each other how much the horse can walk in the day without getting tired and put it to a rate. In addition, if this is an exaggeration, it is certain that no one can move quickly. 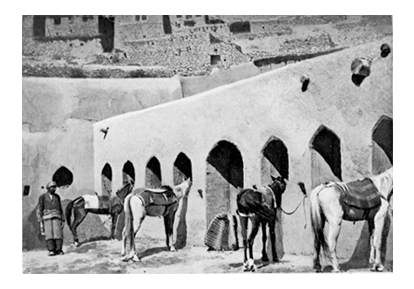 Besides, it transmitted various news from different locations to the center. “During the Qajar era, travelers preferred to stay in chaparkhanehs. In addition, its rooms were cleaner than caravanserai rooms. Furthermore, Chapars of this period destined for passengers in return for receiving funds.

Inside the Meybod chaparkhaneh, there is a small and independent climatic environment. Also, it kept the environmental conditions inside the building in the face of extreme fluctuations in temperature, wind and storms. Besides, with the arrival of cars as well as the system of new posts, the traditional performance of the chaparkhaneh. Thus, their physical bodies have gone away, so that at the moment only ruins of them remain.

Moreover, Clay and mud among the main materials used for the construction of this building. Also, bricks have used in parts of the entrance door, rooftop and the foot of the walls inside the courtyard. Besides, the visible decorations in the building include brick facades at its entrance and congresses above the chaparkhaneh fence.

In addition, the multiplicity of observation towers, high walls and its excellent defensive position can be understate the importance and vital value of the building. Also, the outdoor courtyard and two indoor courtyards of the chaparkhaneh include rooms for the head of the chaparkhaneh, the agile residence of the riders, and the location of the security officers.

Besides, in winter and at night, livestock kept on three sides of the courtyard behind which the mangers located, and on the fourth side. Also, it located between the entrance and the courtyard of the building, rooms provided for the residence of chapars and travelers. 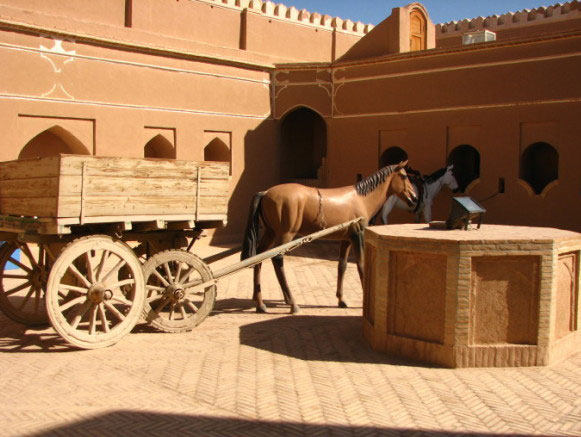 With the establishing of today’s post office and the increasing progress of sending letters and goods between cities and other countries. Also, now only a ruin remains of them, with the help of the Cultural Heritage Organization, some of which have refurbished. Besides, such as Meybod Charkhaneh, and they used as tourist attractions.

Moreover, this work registered on August 10, 2000 with registration number 2767 as one of the national monuments of Iran. Besides, very beautiful replicas kept from old postman and horses they kept. Also, along with old stamps, old post items and historical documents and images related to the post. In addition, the history of this method reaches to the Achaemenid era. Furthermore, this is the oldest post method in the world. So, Iranians consider Iranians to be the inventors of the post.

Back Ground of Meybod Chaparkhaneh

Chaparkhaneh is essentially one of our most important inventions of Iranians. Also, in the Achaemenid era, when there was no news of any of today’s fast vehicles, with this clever idea, they sent important government letters and packages to different parts of the land of the Seven Seas. Besides, the Persian Empire, with the method of “express”.

Also, the chaparkhaneh, which played a key role in the post industry of its time, has been an important base for sending government goods and deposits and secret royal messages and letters. Besides, due to the great importance of this chaparkhaneh, it built as an impenetrable fortress and fortress next to the Shah Abbasi Caravanserai in Meybod. In addition, which is always possible to defend and protect properly.