Khalid Nabi cemetery is a little-known place in the city of dome. It is famous for its special shrines and tombstones. However, it has been destroyed and burned in ignorance.

Khalid Nabi cemetery and shrine complex consists of several pilgrimage places as well as a historical cemetery. The complex, located in the Highlands and mountainous areas of Golestan province. The burial site of Khalid Nabi and also hosts numerous stone statues and small and large. All of these factors, along with the unique landscapes of the surrounding landscapes, have made this area an important tourist attraction in the north of the country. 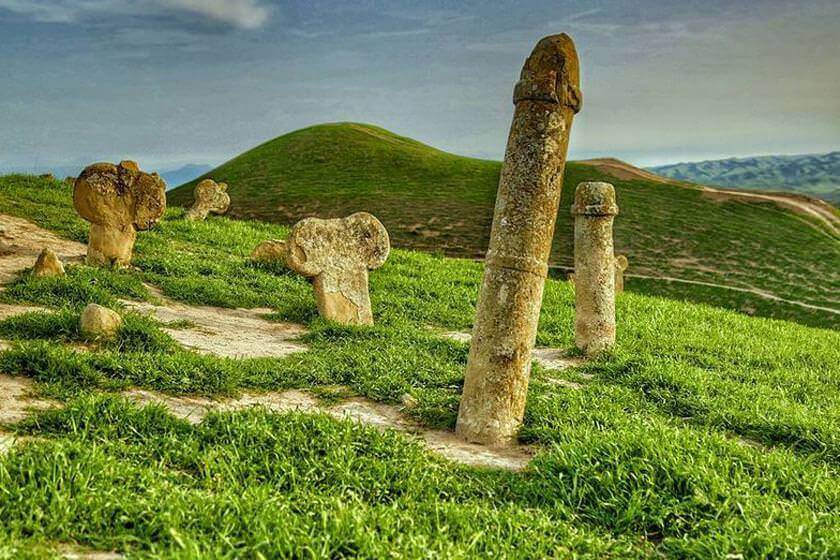 As noted, Khalid Nabi complex  located in a mountainous area. It is 90 km from Kavous dome and 62 km northeast of kalaleh County and 6 km from gypsum village of soo, over the mountain top of “hot goghje”. The peak of the Hot Tomato Mountain, which is 720 meters high. It is in one of the mountains of the region, which is also known among the people and local residents as the peak of “power” or “hot Tanger”. This took from the east to the mountains of “Santa shemlak” in “maraveh-Tapeh”. Also, It is from the North and west to the “thousand valleys”, and from the south to  “five milk” is continuous.

Due to the fact that this 12-acre area  located in remote elevations. Also, access to the cemetery and shrines of Khalid Nabi is possible only from the dome, mavrah Hill and stigma.

The cemetery of Khalid Nabi cemetery is at a distance of 90 km north east of Gonbad-e-qabus, that the cemetery because of the shrines, the stone Graves of his particular famous and is dating back over a thousand years old. graveyard and shrines Khalid Nabi, the scenery of the landscape around many tourists towards itself attract.
This cemetery, in 55 km north-east of kalaleh district. Also, is the famous mountain googje hot that the height of 720 meters.  It is completely in the path of the Highland are, close your sour cream from the functions section, maraveh-Tapeh and over the mountain peaks.

This cemetery  located as one of the mountain ranges in the region. It is between the people and the natives of the region known as the peak power or tangri hot. Moreover, It has a mountain range from the east to the Baba shamlak mountains in marava Hill. It joined the north west to Thousand valleys and from the south to five lions. The Khalid Nabi region dates back more than thousands of times in Paleolithic time. It consists of the shrines of Khalid Nabi and the cemetery of stone tombs.

This set goes back over a thousand years. It Backs to the era of Parine-Sangi returns, the two parts of the shrines Khalid Nabi cemetery. And tombs Stone  formed in continuation to the history of each will be discussed.

Khaled Ibn Sunan, who is known as “Khaled Nabi” by Turkmen compatriots, was born in the land of Aden in Yemen. According to the narratives, he is one of the four prophets who lived between Jesus and the prophet of Islam. At the time of the advent of the Prophet Khaled and his greatness to this place, to escape from his enemies, the Sassanids ruled Iran. Since Khaled Nabi is a popular and respected Turkmen character, the shrine is built alongside a number of rooms and pilgrims to stay and relax pilgrims as well as a mosque that welcomes those interested.

A little further away from the shrine of Khalid Nabi, on another hill of the area, numerous stone statues  raised alongside each other and scattered, like a cemetery, tall from the ground. Based on documentation and evidence, the history of this historic cemetery is related to thousands of years ago. It also appears that the number of these stones was at first about 600 numbers.

With studies conducted in this area, different theories proposed for the specific shape of these rocks. Some believe that large statues represent men who have a hat on the head and a shawl on the waist, as well as small statues in the form of women. Some have likened some of these stones to crosses. On the other hand, in another theory, these large and small statues attributed to the organs of men and women. With all these qualities, almost in a issue, all of these theories to a consensus, have reached, and it indicates that this statue Rocky sentence tombs graves for the residents of this area have been.

Anyway, the sights and sounds the stones and the theories presented. It based on beliefs and rituals for this area in the lambs from the date that such may lead in the group. The only important issue now is the region’s special place among the northern attractions of Iran. But, unfortunately has been damaged and destroyed by ambivalence in recent years. 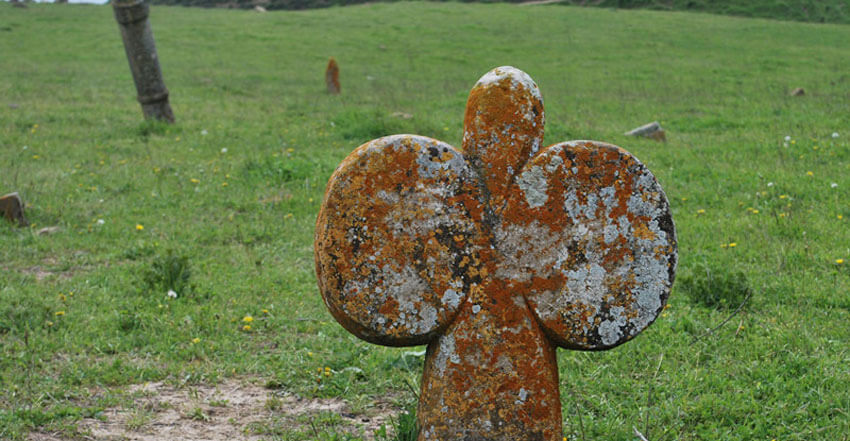 Although the area  located in a relatively remote place. But, it has attracted the attention of a large number of enthusiasts. With the reputation of the ever-increasing cemeteries and shrines Khalid Nabi, this is the place to itself, to gravity become independent. where annually more than 100 thousand tourists, Iranian and Foreign, from the ancient necropolis and the scenery and landscapes around will see it.

Unfortunately, however, this place destroyed in various sections. Destruction such as the breaking of rocks, which, in the wake of lack of attention to the cemetery of Khalid Nabi.  As a national monument, has included many parts of it. The last one is also related to the fire occurring on the grounds of the cemetery.

The fire that happened on September 16, 2017, burned about 3 hectares of area of the area. In the wake of the fire, a number of stone statues burned to the palate. And as a result, the bitter face of this beautiful place remained. Reports indicate that the staff of the complex along with local residents were able to contain the fire. As usual, conflicting news in this regard discussed and there are no specific causes for such disasters.

However, it is important to maintain and maintain the national monuments of the country so that they do not easily end up in destruction. Hope measures and necessary measures for this priority, and the agenda of the relevant authorities. Also we hope it placed permanently and not cross-sectional. we control handle historical and cultural monuments of our country.

For more information, please contact us through our email:
[email protected]