Kay is one of the most spectacular tourist attractions in Zanjan province, a beautiful limestone cave called Kataleh Khur. Besides, this cave, which is also one of the most amazing caves in the world located in Khodabandeh city. Also, if you are a caver or a lovers and enthusiast to visit the cave, we recommend that you visit this spectacular cave on your trip to Zanjan. 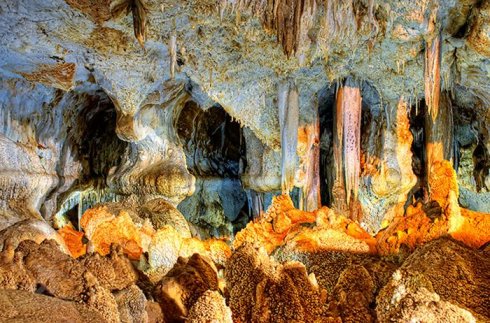 Kataleh Khur Cave is one of the most beautiful limestone caves in the world. Besides, it is one of the unique caves in the world in terms of its antiquity, breadth, number of floors and diversity in the formation of Qandils. Also, the cave discovered before 1921 and registered by Sayyid Asadollah Jamali 30 years later. In addition, the most important and extensive visit to Kataleh dates back to 1986 when a team of elite cavers discovered the cave and many overlooks.

The most unique cave

The Kataleh cave still has many undiscovered paths and no end found for it. Besides, about 30 kilometers of The Cave of Katleh khur has identified and surveyed 22 kilometers from this area. Also, only a 1,200-meter route on the first floor of the cave provided for tourists to visit.

Why this cave is called Kataleh Khur?

In some western parts of Iran, the low mountains called “kataleh”. Also, probably the same thing located in one of these mountains. Besides, the sun rises from behind it and instead of “kateleh khorshid”, it called “kataleh khur”. Locals called the cave “The Dwarf Kettle”.

Moreover, in Turkish, “Kataleh” means the high and roughness of the cave and “khur” means comfort and ease. Besides, generally means comfortable and cozy heights. Also, “Tappeh Khorshid” and “Village Without Sun” are other meanings of Kataleh Khur.

How the Cave  Formed

The formation time of The Cave of Kataleh khur dates back to the third geological period and about 30 million years ago. Besides, Groundwater has penetrated the limestone rocks of Mount Saghizlu. Also, it slowly washed the limestone inside the rocks and rocks, creating holes, and the Kataleh khur cave has emerged in its present-day form.

In addition, the cave is now mostly earthy. Besides, it was a blue cave in the early stages of its formation. Also, the formation of several floors of this cave has caused the water to penetrate the lower floors and the kettle eater becomes a dry cave.  Furthermore, there is still a river flowing in parts of the cave, which the result of the flow of submerged and shaping waters of the cave.

To visit Kataleh Khur Cave, you have to go to Garmab city in Zanjan province. Besides, it is possible to access the cave from three routes:

Moreover, if you are moving from Tehran, take the great tehran-Qazvin road. Besides, take the path of Gheydar after Abhar city and go from there to Garmab. Also, on behalf of Zanjan, you should choose Zarrinabad route, followed by Garmab.

Kataleh Khur Cave located at an altitude of 1,700 meters above sea level. Besides, its height difference is 50 meters from the height of the spring that removes the submerged waters from the cave’s atmospheric falls and flows into the Shore River.

In addition, the entrance to The Kataleh Khur Cave is a 4,000-meter atrium with a short roof with no stone cave and several minor corridors. Besides, after the sub-atrium, there is a vast 950-meter corridor with uphills of two meters high. Also, dry pits that continue with a 50-meter plug and after passing through an uphill, it reaches a wide hall covered with dripping and abstracts and columns.

Moreover, the initial entrance to the atrium has closed in order to prevent possible damage.  Also, the place referred to by locals as Yurt Yiri. Besides, which refers to Turkish as the place where people live or abba and ancestors. Further, one of the wonders and beauties of Kataleh Khur Cave is the multiplicity of floors that these caves are very unique in the world.

The Cave connects to Alisadr Cave in Hamadan

Currently, the Kataleh Khur cave divided into three cultural, recreational and sporting sections, the sports section. Besides, it only used by cavers and rock climbers. Furthermore, it is about four kilometers long and has not yet discovered.

In addition, the recreational part of the cave, which used for public visitation. Also, it is about two kilometers straight said to be only one-third of the total cave. Besides, the cultural part of the cave located in the southern part of it. Furthermore, the main part is the natural corridor that used for holding various ceremonies. Moreover, this corridor has no way outwards and its exit path is artificially dug, but the corridor itself is completely normal.

Moreover, in the case of the animals of The Cave of Kataleh khur it said that the only animal inside the cave is bat. Besides, due to the lack of sufficient nutrition and light, other animals do not live. Also, the climate inside the cave varies in different parts. Furthermore, for example, the entrance is almost cool due to the rotation of the air up to 4,000 meters and starts at 11 degrees Celsius. In addition, in the more internal parts, the humidity reaches about 90%.