in Our beloved Iran is full of countless charms. Every city and country has a world of spectacular attractions in its heart. It can keep you busy for hours and days. This time we want to go to one of the beautiful villages of our country. A village dug in the heart of the mountains. We are talking about Kandovan village. It is one of the most beautiful villages in the world, whose stunning architecture makes you admire it from moment to moment. This village is one of the rare examples of rock villages in the world where its people still live in stone houses called Karan.

Where is Kandovan village?

Kandovan is located in East Azarbaijan province, in the city of Osko. It is famous as the rocky village of Iran because it is in the heart of the rocks. This village has also been registered as a very valuable work in the national monuments of Iran. It is also world famous. It is the only rocky village in the world that is currently inhabited. The other two villages are Cappadocia in Turkey and Dakota in the United States. Unlike Kandovan, where life is current, in these two villages there isn’t any habitation. For this reason, Kandovan is one of the living examples of rock architecture and inhabiting the world. Kandovan village is in the list of national heritage since May 1997.

The reason for the formation of Kandovan village

The formation of Kandovan village and its sugar cane rocks is due to the grace of nature and the volcanic activity of Sahand mountain. Sahand Heights is one of the most important dormant volcanic mountains in Iran. Molten material has leaked from the craters of Sahand and other volcanic mountains for thousands of years. These lavas have accumulated over the centuries and gradually rock crusts have formed on them in different layers. Gradually the less resistant parts and the less hardened parts are shed and the harder parts remain. It has created the current situation, which is more like a miracle of nature. Excessive wind and rain, especially in the borders of the entrance part of Kandovan village, have been more effective and have caused a lot of damage to them.

There are several theories about the antiquity of the early inhabitants of Kandovan village. It is said that the people of this village were nomads who used to use Kandovan as a summer resort. The houses dug inside the shores were used as temporary houses, which later reduced the hassle of moving and settled there. The history of living in this village dates back to the seventh century AH. The strongest narration attributes the antiquity of Kandovan village to the time of the Mongol invasion of Iran. At that time, the people of the Hilevar village, which lived 2 km west of Kandovan, decided to escape the Mongols. For this reason, they go to the nearest plain, which is Kandovan. Then, by digging inside these rocks, they build their houses.

The people of Kandovan live in spaces and houses that are locally called karan. They dig into conical rocks, as needed, and as far as the type of rock allows, and turned them into living spaces. The borders are multiple, paired, single, conical and spindle-shaped. The height of these borders reaches even more than 60 meters. The horizontal formation of the houses is due to the lack of natural rocks. On the other hand, to prevent the rocks from breaking, the thickness of the walls should be thick so that the houses cannot be expanded too much. So that if the number of floors is large, the strength of the rock structure will be reduced. The formation of the building in this way is all influenced by geographical factors. 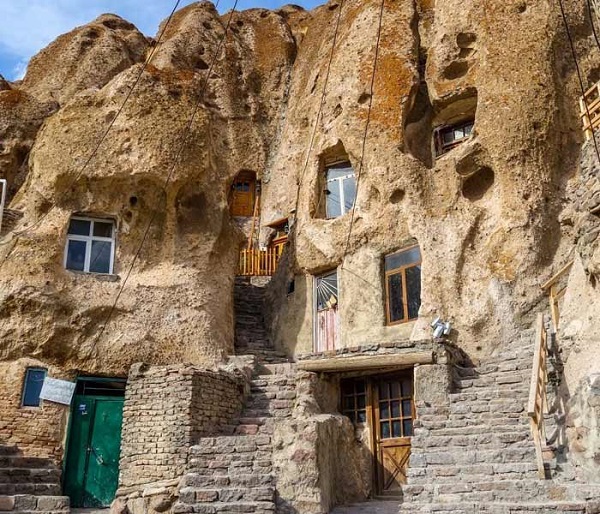 The residents of Kandovan village have placed the houses in such a way that in order to maintain security, it is not possible for wild animals and possible enemies to enter the houses. For this reason, doors and windows are a little more internally. Due to the difficulty and limitation of digging, they were dug to a height of 1.6 to 1.5 meters and a width of 1.3 to 1 meter. Most are made of wood, of which very few have been converted to iron in recent years.

Due to the increase in diameter and thickness of the lower parts of the borders, skylights are located on the upper floors of the borders and each space has a minimum level of light. The windows are mostly from wood and are often square in shape with small pieces. To prevent snow and rain from entering the spaces, windows have been installed inside the walls. You can join our team, Iran Destination, and get more acquainted with this village. Iran travel agency, Iran Destination, will organize your trip to Iran. You can offer your tailor-made trip to Iran or visit our programs on the Iran tour page. You can contact to our Iranian travel agency, our agents are online to answer all your questions.

Examining the sidewalks in Kandovan village, the alleys of the village are in fact the same grooves caused by the destructive flow of running water. On some of these grooves, wooden steps have been made to make it easier to get around. Stone steps in outdoor spaces are often very high. Also, the villagers go up and down it without feeling upset. The communication paths between the cones are very narrow. However, they do not feel uncomfortable passing through them. 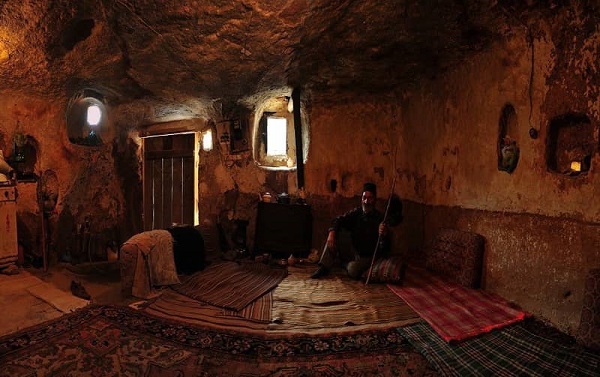