Jame Mosque,Isfahan : Located in the historic center of Isfahan, the Jame mosque can be seen as a stunning illustration of the evolution of mosque architecture over twelve centuries. It is the oldest preserved edifice of its type in Iran and a prototype for later mosque designs throughout central Asia. 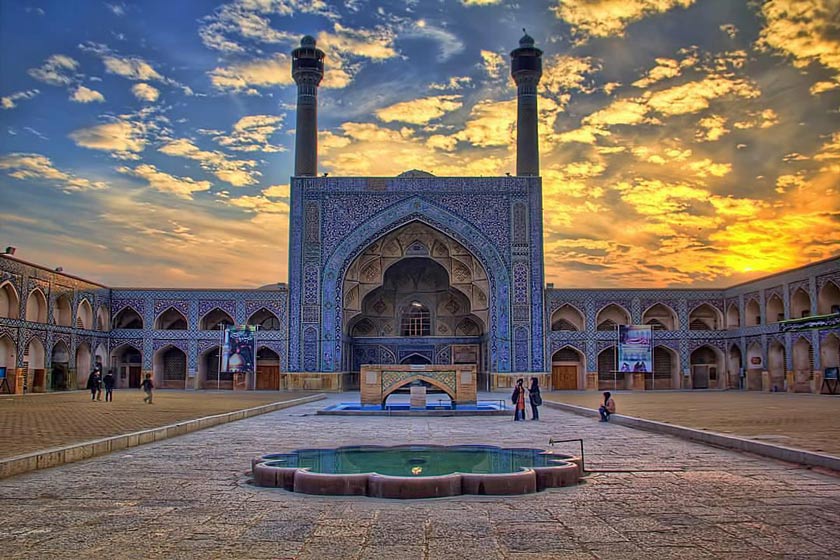 Isfahan Grand Mosque, which built and completed during the 12th century for the cultural and religious activities of the Albuyeh, Seljuk, Ilkhanid and Timurid eras. It said that the date of construction of this mosque is equal to the creation of the city of Isfahan.

It built in the Khorasanian style on the remains of a fire temple. And its materials raw clay. Over time, markets, neighborhoods, and public buildings built next to the mosque. And people chose to live there.
Years later, during the Abbasid rule, an order was issued to demolish the mosque, and a larger building was built in the Khorasanian style, to which a library and classrooms were added. This time the walls made of thatch and red. In the time of Al-Buwayh, brick columns with patterns added to the building. During the Seljuk period, the most changes made for the Isfahan Grand Mosque. So that the nave became a porch and the dome of Nizam-ol-Molk and Taj-ol-Molk built.

Different architectural styles see in Isfahan Grand Mosque. The four-porch mosque, which is famous for its Iranian mosque design. Four-porch architecture is more related to interiors; Spaces such as the space in front of the altar and the dome. The architecture of this mosque used as a model for many years. And other mosques built in this style.

Brick is the main material in the construction of the mosque; But the completion of the main building is with raw clay. Two-part brick, three-part and four-part brick columns, fountain arches, four-story porches, double entrances, various decorations, all of which are innovative methods for this mosque.

However, This complex covering more than 20,000 square meters is also the first Islamic building that adapted the four-courtyard layout of Sassanid palaces to Islamic religious architecture. Its double-shelled ribbed domes represent an architectural innovation that inspired builders throughout the region. The site also features remarkable decorative details representative of stylistic developments over more than a thousand years of Islamic art. Jame mosque is the oldest Jame mosque in Iran.

As we have said, the Isfahan Grand Mosque is very large and has different sections: the main courtyard of the mosque, which has 4 porches on four sides, two-story pavilions and two square and polygonal pools. Upon entering the mosque, you will see two square tablets on either side that are considered sacred.

In the sixth century, when part of the columns and the opening of the nave destroyed. The north porch built in its place. It known as Sefeh Darvish. This porch has decorations such as shrubs and Kufic lines and with a simple appearance has brick and plaster decorations inside and two plaster inscriptions at the top and bottom.

Above all, The building illustrates a sequence of architectural construction and decorative style of different periods in Iranian Islamic architecture covering 13 centuries most predominantly the Abbasid, Seljuk, Ilkhanid, Timurid and Safavid eras.

This mosque contains a continuous sequence of Islamic architectural styles,the most prominent of which date from Seljuk period.The remains from the Seljuk era especially the key elements of the ground plan,the four courtyard and the two domes are sufficient to illustrate the advances in mosque and dome architecture made at the time.

Iran Destination is an Iran Tour Operator feeling responsible  to provide Iran visitors with the best services. You can look at our Iran Tour  and choose one to travel to Iran. If you have any questions, please feel free to ask our Iran Travel Agency team members. We are available.