Iranian ethnic clothing, Iran is one of the most important tourist areas in the Middle East, which is located among 19 countries registered in UNESCO. The Iranian people have different cultures and beauties, each of which has its own language and Customs and most of the Iranian tribes are Shiites.

Iran is one of the most important tourist areas in the Middle East, which  located among 19 countries registered in UNESCO. The Iranian people have different cultures and beauties, each of which has its own language and Customs and most of the Iranian tribes are Shiites. Iran is a country that has diversity in weather and the presence of different tribes, like leaving, Kurdish, Lur., the Persian Gulf, Arab, and many others make it to the destination, hearty, cheap to buy plane tickets and travel has become. The diversity of the climate in Iran has also affected the people’s clothing and clothing of this land.

Different ethnicity in Iran, according to their culture and climate, have their own type of coverage. Although covering different tribes, each features its own particular, but they all have one thing unique, but artistic, and elegant, of different colors and that happy sound effects and a special beauty to your clothes especially dress, ladies every nation gift is given. Traditional apparel today is part of tourist attractions and encourages interested people to buy airfare and start a cultural journey.

Turkmenistan is one of the ethnic groups that encourage tourists interested in Turkmenistan areas to visit these people and their type of coverage. The oldest Turkmen folk clothing made of silk, but other fabrics such as skin, linen, and cotton can also  seen in these folk clothing. Men’s clothing consists of tights, pants, shoes and a hat. Tops or long cloaks that called Don (cyzyl Don or long red cloak is one of the signs of Turkmen dress) sometimes this Don was burned for more beauty with a tape. On this shawl, which called a shawl tirmeh, they closed. Sometimes they wore a coat-like dress called a Chuckman. Kvink is a simple, collar-free shirt that Turkmen men wore from underneath.

In order for the quink to look more pleasing, its sleeve was embroidered. Turkmen men’s pants, which called balconies, are loose and sometimes associated with decorations such as pomegranates. The hat is another feature of Turkmen men’s clothing. It is generally thought that Turkmen men’s hats are just skin hats that have long wool. But it should be said that the hat, known as telepack, has a variety of types; in addition, men use beanie (Brook)also. Shoes from other elements of men’s clothing. Turkmens use high boots made of leather instead of ordinary shoes. Women’s clothing is also composed of men’s clothing, pants, shoes, and a hat, but scarves and ornaments are among other features of women’s coverage. Turkmen women’s clothing  made of silk and is usually red in color.

The peculiarity of this Iranian ethnic dress and dress can referred to as burning sleeves and collar. Turkmen women’s pants were also embroidered, showing the elegance of the ladies. Women’s hats usually Kurdish and without bumps and adorned with sequins and diapers. Scarves are not widespread among Turkmen people and the use of hats has been more common. Turkmen women’s shoes are a product of the art of the hands of local artists who sew different types of them. 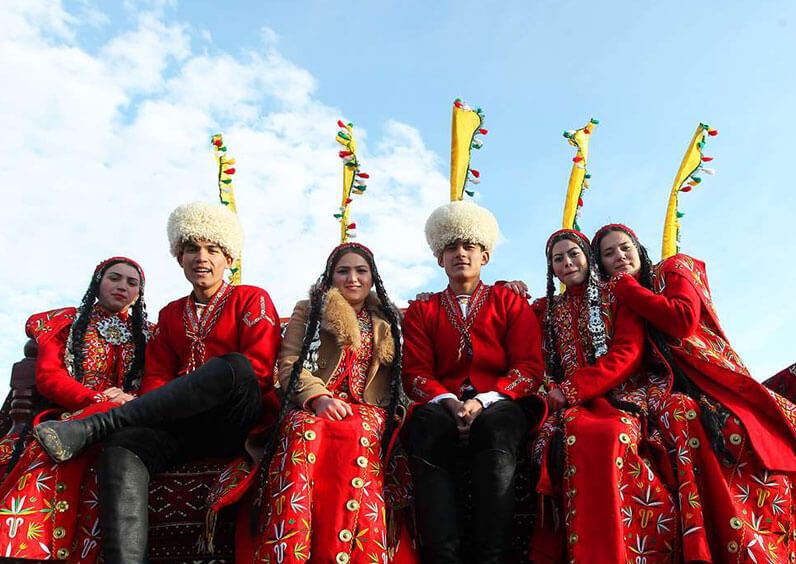 Although Khorasan is today a religious area that hosts pilgrims and travelers who have become guests of this line. But the people of this land have long had Islamic clothing and some kind of clothing of Iranian tribes. Khorasan people at the same time comfortable, worn and Islamic. The dominant colors in Khorasan people’s clothing are dark colors. Khorasan men wear flared trousers with long shirts and collar, which generally associated with turbans on the head. Covering Khorasani ladies like their men is accompanied by long shirts.

Kurds are hospitable and kind relatives, it is enough to travel to one of the Kurdish cities to host these people to see and experience. Hosting and kindness of these people has also appeared in their clothes. Whatever you imagine as part of a kind of coverage, you will find it in the coverage of the Kurds. Kurdish-speaking people’s clothing is full of energy and joy. Since the Kurds are scattered in different regions, their coverage is also of great diversity. But in general, it can be said that both men and women wear flared pants that we know as Kurdish pants, and they close the wide shawl on the waist. Among the features of Kurdish clothing is its colorfulness.

You will find dark colors rarely in Kurdish clothing. Other features of Kurdish clothing include women’s clothing that hang jewelry and coins as decorations to their clothes, especially their scarves. Traditional Kurdish shoes are also such that a person feels comfortable in it. Shoes call Kurds. If you interested in Kurdish clothes, you can travel to Kurdish areas, dress beautiful and colorful people and take beautiful photos. 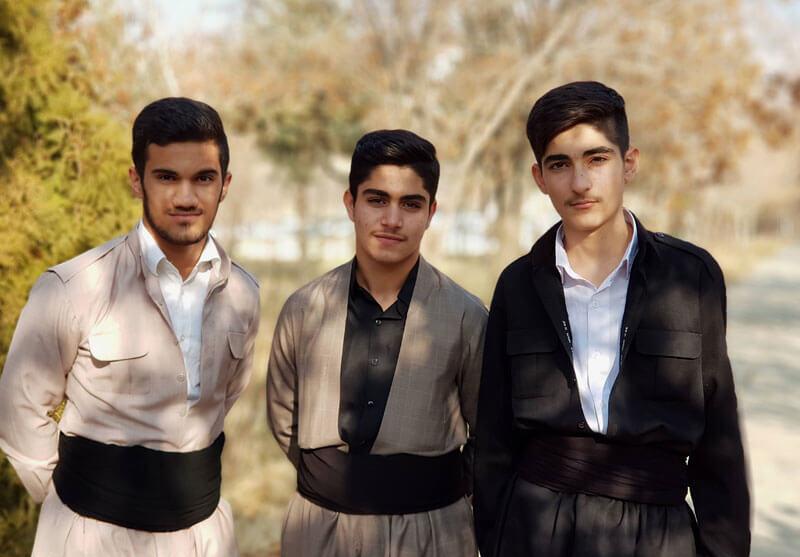 Baloch apparel, especially in Sistan and Balochistan, influenced by the type of coverage of these two countries in terms of being bordered by Pakistan and Afghanistan. The feature of Baluch men’s clothing is a long shirt with loose trousers, complemented by tying the turban to the head. Women’s coverage is also loose and comfortable in terms of their activity. Baluch women’s shirts are usually up to the knee and women tastefully set their shirts with their pants. The use of various colors in clothes is another feature of the coating of Balochs.

Other relatives who must travel to their cities and visit their traditional attire are Lurs. Lor men’s clothing is generally in dark brown and gray colors. The characteristics of men’s clothing are their simplicity and low layout. The jackets and vests that men wear are usually loose and provide comfort for men. Sometimes the use of a hat seen in men’s coverage. Lor ladies dress in such a way that they wear their heads and necks perfectly. The feature of women’s clothing is the use of short-sleeved vests, most of which, unlike men’s clothing, are bright and cheerful colors. 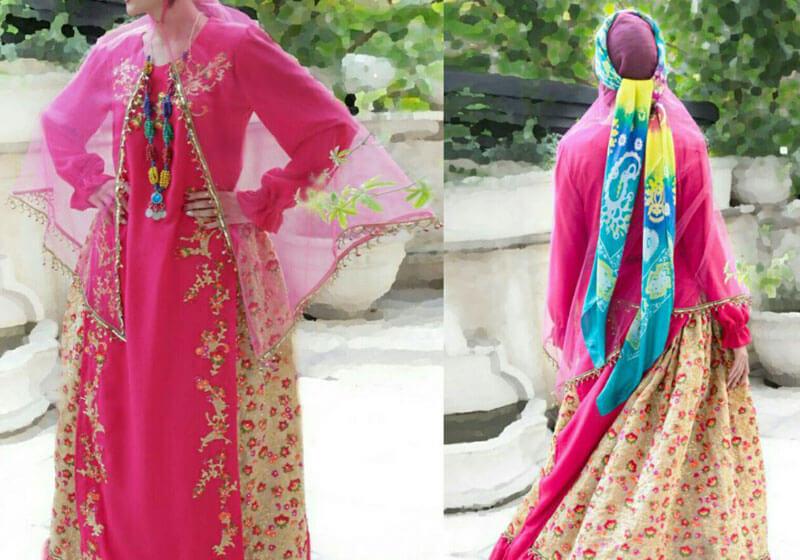 The lush lane of the North always welcomes both domestic and foreign tourists who travel to this beautiful weather area. The clothes of the gilaki people, as well as their living environment, amaze the eyes of every viewer. The gilak people’s clothing is a symphony of colors and brings energy and vitality. This dress is in addition to long historical eye-catching colors. The gilaki dress is 4,000 years old. As we said, the combination of many colors is one of the characteristics of gilaki clothing. Gilek ladies wear high skirts that are high up to the ground.

The layout of these skirts is usually horizontal stripes, each of which has a different color scheme. These long skirts  worn with plain shirts and colorful vests. White and knotted scarves are another feature of the gilak women’s cover. The different characteristics of gilaki men’s coverage  the belts that attached to their waist. The material of these waists is cotton. In addition, the use of hats is also common among gilaki men. Men’s hats are cylindrical in shape and laid out according to different circumstances and occasions.

Even if you have seen many traditional and local coats and clothing, you will see less such as Bakhtiari coverage. Bakhtiari folk coverage adapted to different weather conditions. Bakhtiari men wear long shirts with loose trousers, which fastened from the ankle. The use of round hats that are often dark in color is also common among men. Bakhtiari ladies wear multi-layered and colorful skirts that match their vests and give a special effect to Bakhtiari ladies ‘ clothing. Shawls and long scarves  adorned and decorated with elegance and art of women’s hands. 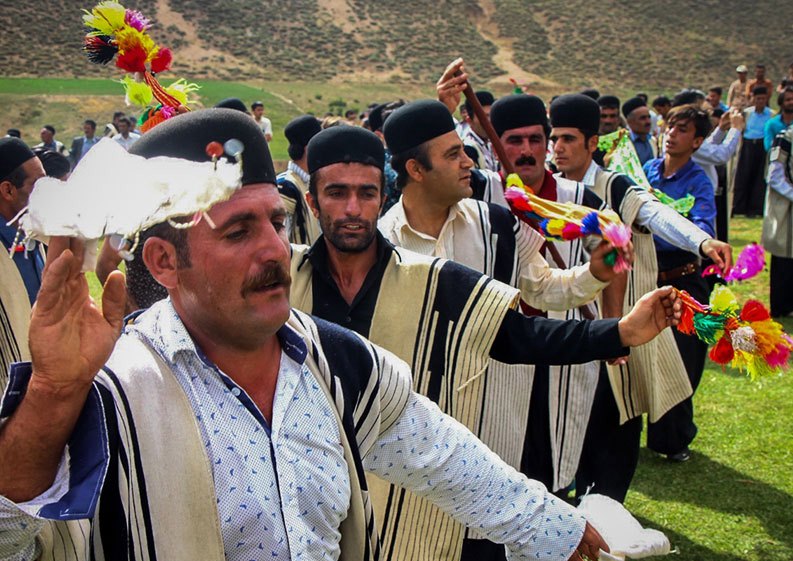 Hearing the name of Qashqai immediately comes to mind the model of the hat of Qashqai men. Even if you’ve been around the world, you won’t see the same model of the hat. Qashqai men’s hat has a round shape. Hats made of sheep’s wool and hair and light brown. Qashqai women’s covers consist of folded skirts, long shirts and bright colors, and long scarves with buttons tightened under the chin. This type of coverage attracts many tourists today. 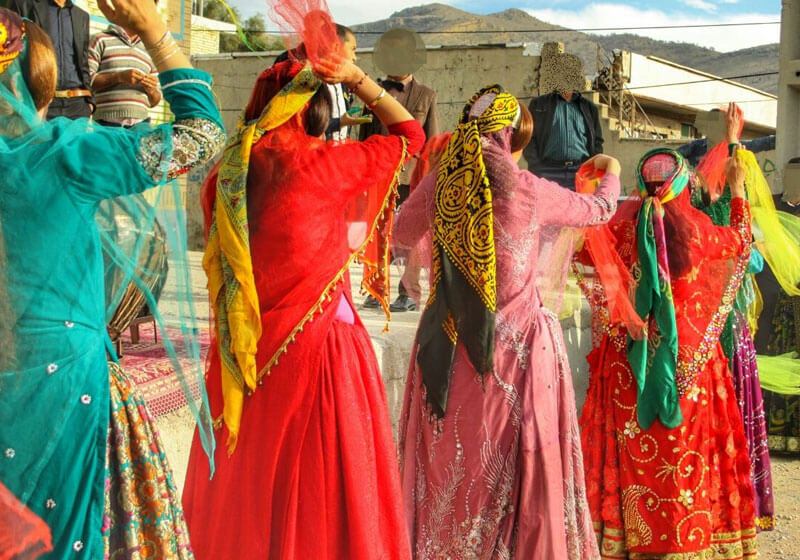 The feature of the garment is the dress of the Iranian and southern ethnicities of the masked ladies and their bright colored tents and mud flowers. Masked ladies in two: the first model etc. Abrovan to thick, and with a mustache designed and Abrovan  ladies, never true and the second type of  entire face covered and only two eyes seen. The advantage of these masks is the protection of the face against wind and strong sunlight in these areas. By traveling to the southern regions of the country, you can still see this type of cover and mask in the alleyways. 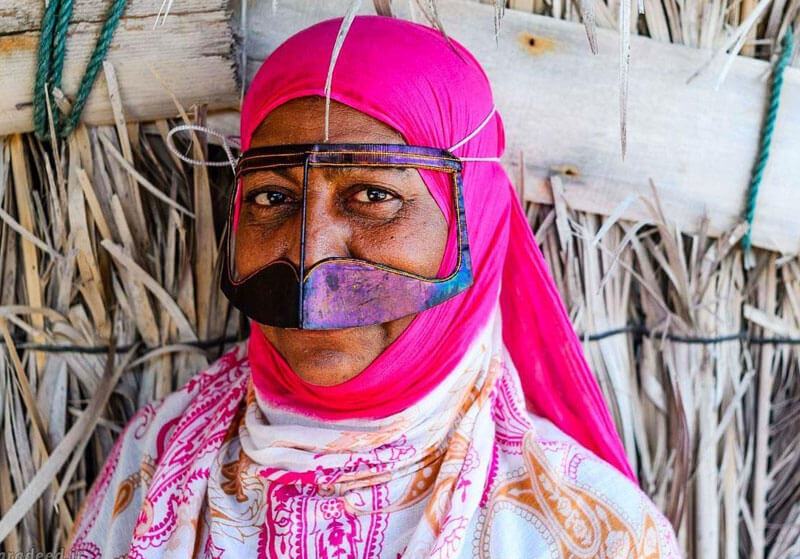 Iranian women’s clothing and Iranian relatives ‘ clothing in terms of diversity and colorfulness, more than men’s clothing considered. Although it may seem that the traditional coverage of the declining and obsolete relatives, it is enough to travel to different areas to see the original presence of these coatings. Fortunately, today, fashion designers and costumes are inspired by these traditional and local costumes, and today we see clothes that, at the same time, the originality of the late with their own. The clothes that have been the desire of the old and modern youth of this land and are also consistent with the subtle spirit of the ladies. 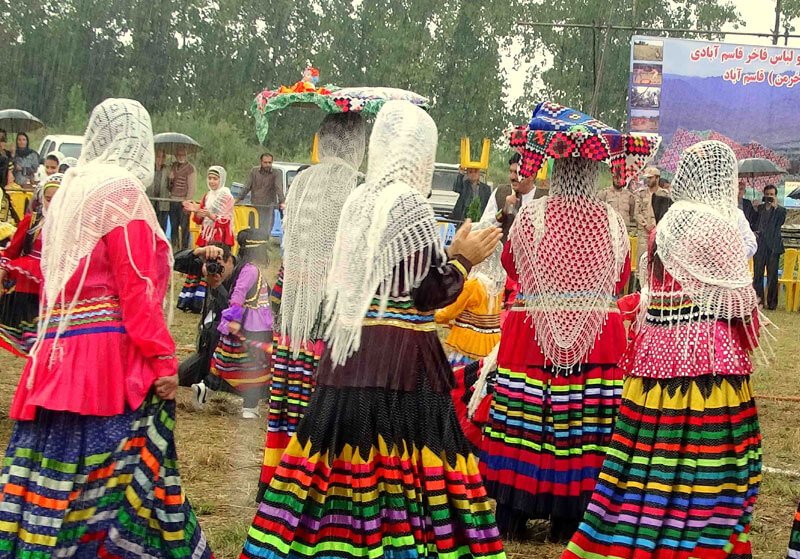