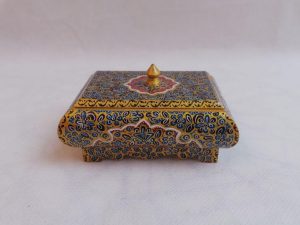 Crafts have always played a predominant role in the artistic history of Persia. Iranian Craft is one of the most remarkable characteristics of Iran and Iranian culture. Hundreds of art forms have created by Iranian people through time. Persian art is known for its vivid colors such as Granada red, turquoise and navy blue; and it is easily recognizable by some parameters which dominate symmetrical forms.

For centuries, Iranians have used their art as a form of expression and a source of income. For thousands of years, the carpets have had a special value in Iranian houses, especially in rural life. People used to spend their leisure time weaving to provide financial support to the family. 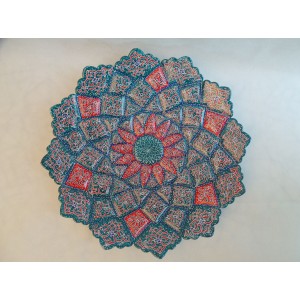 But the Iranian craft is suffering a setback today. Some of its manifestations have faded, some are endangered. One of the most important reasons can be the fall in demand, as decorative objects are expensive. Sales, inside and outside of Iran, are affected as a result of the phenomenon of the twentieth century. It was easy and inexpensive to transport products. Today Chinese products have flooded not only the Iranian market, but also the world. The economic sanctions imposed by Western nations have prevented the export of Iranian handicrafts.

The craft is the artistic identity of a nation, in Iran there are thousands of handicrafts which date back to many years ago. Today we’ll meet a hand-woven exclusively by Iranian artists called Termeh which is a kind of Iranian handmade crafts producing mainly in the province of Yazd. The modern crafts of Persia encompass such media as Textiles, Ceramics, Metalwork, Carving, and inlay work.