Is food cheap in Iran?

What are Iranian famous foods?

Chelo Kebab is undoubtedly the most famous Iranian dish and many people know Iranian cuisine with chelo kebab. A variety of barbecues, especially bangs, are very popular among Iranians and tourists. Kebab chelo, as you know, is usually served with tomatoes and grilled peppers, saffron rice, buttermilk and fresh herbs. Of course, sometimes they eat the squash with bread instead of rice, which is 100 of course better to be Sangak bread!visit Iran

Many Iranians if you ask what is your most popular food probably says Gharmeh Sabzi! Gharmeh sabzi stew is prepared with plenty of fragrant vegetables, onions, Omani lemon, red beans (in some parts of Iran, pinti beans and white beans) and lamb, calves or lamb. The secret of a delicious vegetable is like many Iranian cuisines at the time of cooking. The less heat you cook the stew and the longer the time, the more savory and savory it becomes. Gharmeh Sabzi is eaten with plain rice or saffron, and the experience of eating it will certainly be interesting and attractive to foreigners.

Well, it’s time for The Fasanjan Stew! The delicious Iranian majlis stew that has won everyone’s hearts and adorns important gatherings and parties. Fasnjan stew is made from milled walnuts, pomegranate paste and chicken meat or meatballs. This stew, like Gharmeh Sabzi, should be cooked for hours on a low heat to fit in. In different parts of Iran, they make this stew in different ways, and some places make it sour, others add a little sugar to the food to make it completely sweet. Visit Iran

Daisy, also called gravy, is one of the most original Iranian cuisines. If you want to familiarize your foreign friend completely with Iranian culture and cooking, take him to the traditional restaurant and order Daisy! They cook mutton with legumes, potatoes, and sometimes tomatoes, to fit in. Then they eat it with Sangak bread, vegetables, buttermilk and onions. Visit Iran

Another of the best Iranian dishes served in is Barberry Polo, which is often prepared with chicken. Barberry Rice is made from a combination of barberry, saffron and white rice, and in addition to its extraordinarily delicious taste, it has a very beautiful and parliamentary appearance. Barberry rice with chicken is one of the most delicious Iranian cuisines and has gained a great reputation in the world. 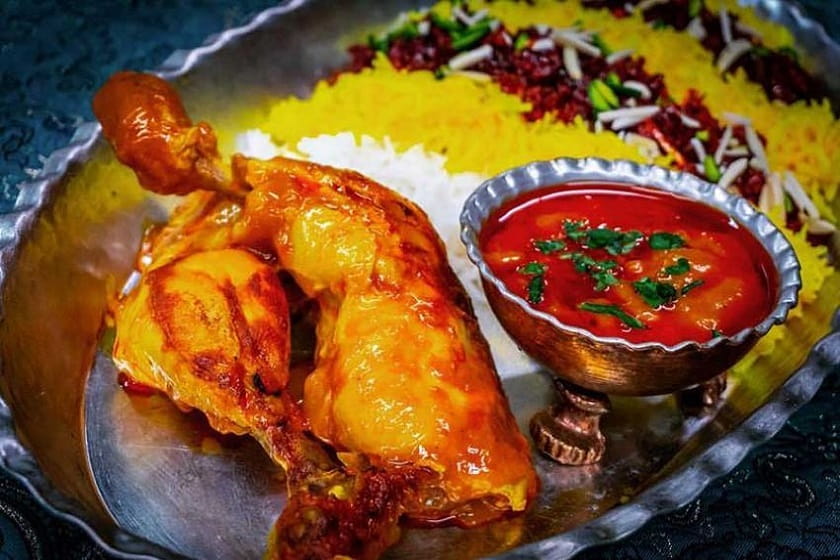 Cherry with its beautiful and colorful appearance is considered a parliamentary meal and is served at many official parties and ceremonies. Rice cherry is one of the most delicious Iranian cuisines and it is made with both red meat (meatballs) and chicken meat. Making rice cherries requires special skill and skill, and not everyone can make it well. 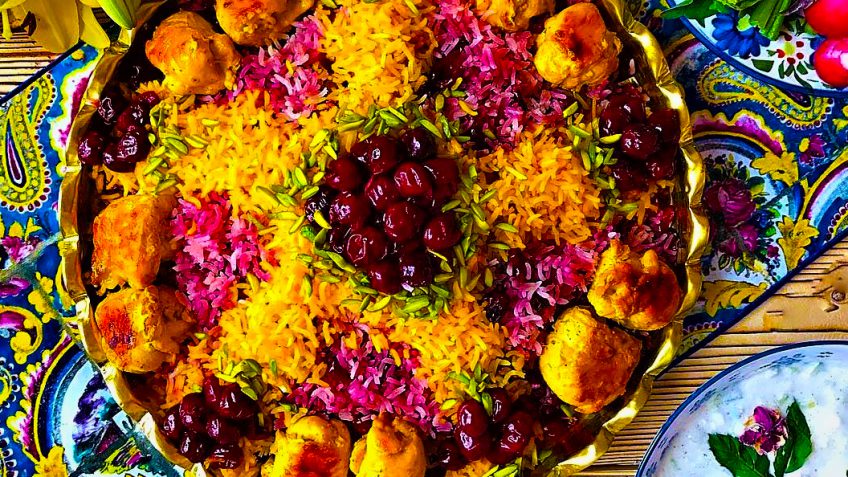 If prepared with muscle, baqali polo is one of the most enjoyable and delicious Iranian cuisines and many Iranians and of course foreigners love it. To make the rice, combine the white rice with baghali and saffron, and finally place the lamb muscle or chicken meat on the side of the plate and serve. iran tour

Rice beans are another delicious Iranian dish that has a special tradition to serve. Rice beans are usually ingasted with the bottom of the pot of bread or potatoes, Shirazi salad, vegetables and yogurt, which is a very tasty combination. To make rice beans, combine the chopped green beans with meat and onions and tomato paste and various spices and put on a gentle heat to tail and prepare. Visit Iran

The bottom of China | Tahchin

Bottom of China is one of the most delicious and beautiful Iranian cuisines that has a very stylish and parliamentary appearance. It is interesting to know that foreigners call the bottom of China because of its beautiful appearance of Iranian cake. China’s bottom is simple and accompanied by chicken, meat, eggplant and … They do, but the bottom of the chicken is more famous. iran tour 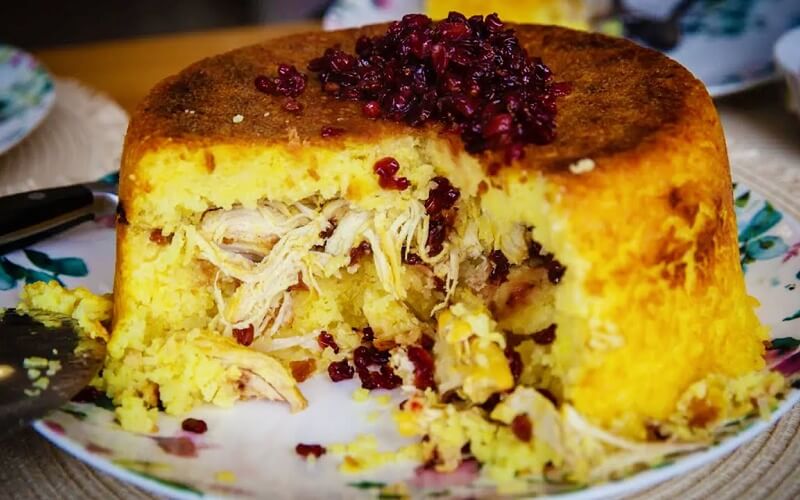 Iranians love meat and in most Iranian cuisine there is definitely chicken or sheep and calf meat. One of the most delicious meat dishes is roast chicken, which is grilled on charcoal and is very tasty. One of the traditions of Iranians is that when they go to the heart of nature for camping, they must bring the ingredients for the preparation of roast chickens and roast the chickens there on charcoal and fire! The chicken eats roast along with grilled tomatoes and saffron rice and butter, which is a very tasty combination. iran tour 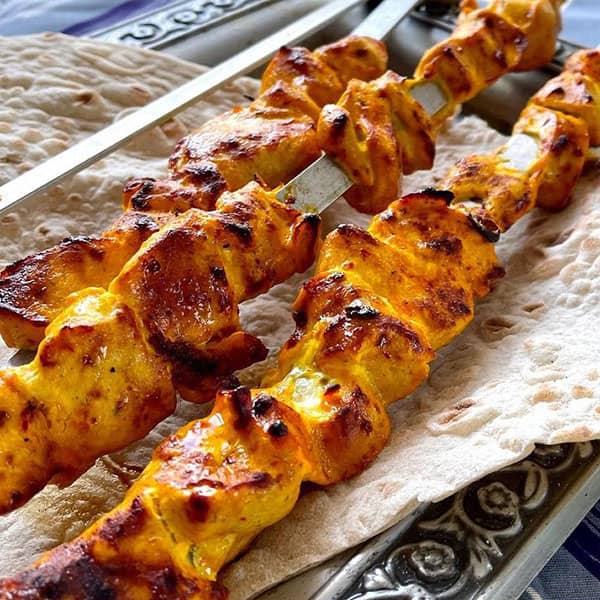 Another iranian cuisine that is very popular and popular is mince stew. Mincemeach is often prepared with slices of fries and sometimes with eggplant, the first of which is called potato mince and the second is eggplant mince. To make mince stew, cook minced meat with onions and peas and tomato paste, Omani lemon and water to fit perfectly. Finally, add fries or fried eggplant to the stew and drink along with plain rice or saffron. Visit Iran

Eggplant is used in many Iranian cuisines and iranian people love it. One of the most delicious foods made with eggplant is eggplant stew. To make this stew, cook the meat with onions and spices, and then add fried eggplants, eggplants and ghora. Eggplant stew is often eaten with white rice or saffron, although it can also be served with bread. Visit Iran

Dolmeh has different types and dolmeh leaves, tomatoes, eggplants and capsicum are among the most famous. However, dolmeh leaves of hair are more popular and many Iranians make this dolmeh in spring when the leaves are fresh and sour and delicious. Dolmeh in Iran is one of the local cuisines of West and East Azerbaijan provinces, however today it is cooked throughout Iran. The ingredients inside the dolmeh are a combination of minced meat, dolmeh greens, onions, pea, etc. Is. Visit Iran

Tabrizi meatballs, as its name suggests, are originally Tabrizi food, but today it is prepared throughout Iran and is considered one of the most delicious Iranian cuisines. In Iran, a variety of meatballs are prepared, but Tabrizi dumplings are the most famous and delicious. Tabrizi meatballs are made from a combination of meat, pea and vegetables and poured into the dumplings of boiled eggs, plums, walnuts, hot onions and barberry. iran tour

There are many ashes in Iran and each region has its own ash. In the meantime, Ash Strand is the most famous and foreign tourists are more familiar with it. Ash Noodle is one of the most popular Iranian cuisines and is cooked as a vow during days such as Ramadan. To prepare ash, they cook different legumes with special vegetables and then add ashi and whey. Decorating on ash is very important and many Iranians are very good at decorating. Hot onions, hot garlic, hot mint and curd are among the main decorations of ash noodles. iran tour