Marketing is one of the most exciting activities we do during our travels. Traditional markets, apart from the issue of buying and finding souvenirs, are a wonderful place to learn more about the culture of their tribes and traditions. Most cities in Iran have a famous traditional market. Exploring Iran bazaars is very attractive for foreign tourists. You can join our team, Iran Destination, and get more acquainted with Iran bazaars. Iran travel agency, Iran Destination, will organize your trip to Iran. You can offer your tailor-made trip to Iran or visit our programs on the Iran tour page. You can contact to our Iranian travel agency, our agents are online to answer all your questions.

The importance of the Iran bazaars in the history of Iran

The bazaar has been one of the most important social centers in the recent history of Iran. Many important political and social developments began in the market. Then it spread to the rest of society. The Iran bazaars was the platform for most social communication. In fact, people saw the market not only as a place to trade and buy goods, but also as a place to hear news and talk about events and social connections. Because of this, the market was highly valued among the people. In all cities of Iran, you can find traditional markets that are very old. The beautiful and unique architecture of Iran bazaars has made them one of the most important tourist attractions in Iran. Most of the famous traditional markets are located in the cities of the central regions. But other parts of Iran are not empty of these tourist attractions.

Although we know only one general name called bazaars, the markets themselves have their own names for each component. For example, the markets have a main line or path that when we enter from its entrance, we move in a straight line with a wave of people. Chaharsoo or Chaharsooq is the same crossroads on the street. In fact, the place where the four rows collide is called the four rows. The corridor-shaped space of the market provides little opportunity for conversation and socializing. For this reason, in some quarters, something like a square was built, which was called Jelokhan. Although some markets may be roofless, precious goods such as carpets cannot be stored in such an environment. For this reason, they covered the roofs of some parts of the market and called it Timcheh.

Qeysarie is also very popular with tourists for its arched architecture. This Qeysarie has the most beautiful architecture of traditional Iran bazaars in Iran. Another component of the market was the caravanserais. When it came to shops, workers needed a place to rest before moving on. For this reason, caravanserais were inside the market. This issue is especially evident in Kerman or Kashan bazaars. 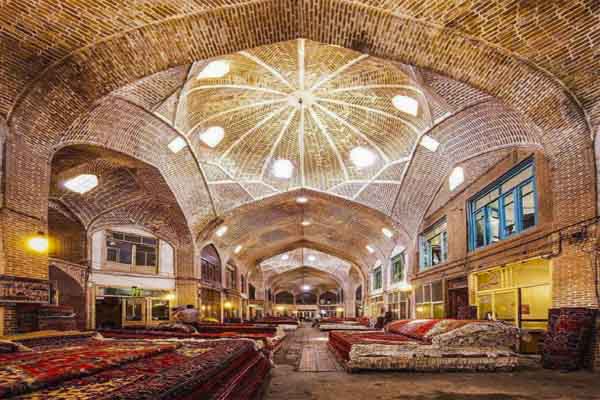 Qaisaria is the most famous traditional bazaar of Isfahan. This beautiful market is located in Naghsh Jahan Square. Headache at the entrance of Qeysarie Bazaar, there are beautiful tiled remains of the symbol of the Arc Tower. The reason is that in the past, the people of Isfahan believed that the city was built in this tower. Qeysarie Bazaar reaches the Grand Mosque. But in the end, it ends up in the Arab market. You can see interesting mosques and buildings along the bazaar that are reminiscent of different historical periods. Handicrafts, which are the handicrafts of the best Isfahani artists, are among the attractions of Qaisaria Bazaar.

Kashan traditional bazaar is one of the most beautiful traditional markets in Iran. The beautiful architecture of this bazaar and the existence of a caravanserai and beautiful buildings along it, has caused us to give this attribute to the traditional bazaar of Kashan. Kashan Bazaar, like most traditional markets in Iran, dates back to the Safavid period. However, the peak of sales and traffic in Kashan market has been from the Qajar period and the prosperity of trade. Famous buildings such as the Boroujerdi House are located around Kashan Bazaar. Numerous caravanserais located in Kashan Bazaar are other reasons for the attractiveness of this market. The most famous order of Kashan market is copper sales market. 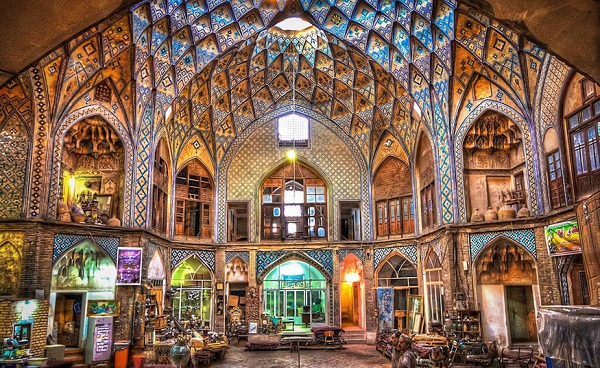 Yazd is one of those cities that has many traditional markets due to its long history. In fact, if you love traditional texture and historical and traditional markets, Yazd is your paradise. Yazd brick markets with the special architecture of this city and its beautiful windmills can be seen in all parts of the historical context. The most famous historical bazaar of Yazd is Khan Bazaar. This bazaar, which dates back to the Afshari period, is actually the longest bazaar in Yazd.

You may be interested to know that Qazvin Bazaar is one of the oldest markets in Iran. The traditional bazaar of Qazvin dates back to about a thousand years ago. Of course, the current construction of Qazvin Bazaar was completed in the Safavid and Qajar periods. Qazvin Bazaar, with its beautiful Iranian-Islamic architecture, is still beautiful and stable after centuries. The most beautiful part of Qazvin Bazaar that you should not miss is Saad Al-Saltanah Palace, which has also reached the national register. The beautiful tiles and architecture of this house in Qazvin Bazaar amaze every viewer. 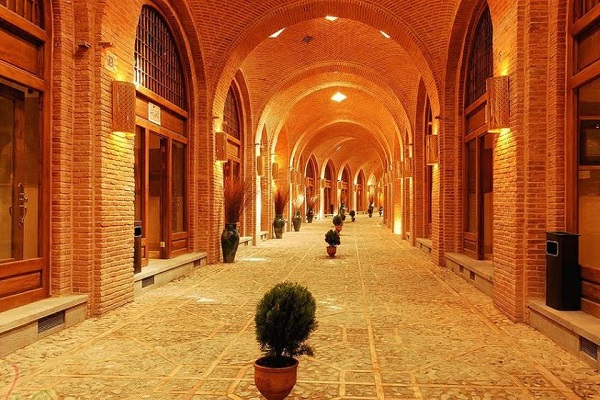 You must know the daily markets of northern Iran. Markets that are usually more prosperous in the morning and are formed on certain days of the week. You can find day markets in every northern city. You just need to know where in the city and when they are. Good-natured and kind people who buy or sell their agricultural and livestock products. The aroma of local vegetables and fruits and the combination of attractive colors together are the most important features of day markets in northern Iran. The day markets of northern Iran are also usually open and most sellers sell their products on carts or on the ground.