aIran Destination is a well-operated tour operator in Iran which makes your travel to Iran easy. We suggest you have a look at our  Iran Tourism Packages.  Our Iran Travel Agency is ready to help you to travel to Iran. Following, let’s Exploring Shiraz and its old Civilization!

Shiraz is the 5th biggest city in Iran and the most important and appealing city in Fars province. It is in Zagros mountainous area. However, the name of Shiraz was discovered in the Achaemenid inscription in Persepolis. Iran Destination proposes you to follow this article to get acquainted with this historical and charming city.

Shiraz and Culture for Exploring Shiraz

It is one of the oldest of ancient Persia and definitely one of the most significant tourism centers. It is the cultural capital of the country, 2nd literary city in the world. Also the city of poetry, wine, and flower. However, the moderate climate and is a regional trade. Shiraz is a medical center cause to attracts plenty of tourists to the city too.

In addition, it is the city of gardens, with regard to many gardens and fruit trees that are visible in the city. For instance, Eram Garden, Afifabad Garden, Jahan Nama Garden, and etc,… There are several unique handicrafts including inlaid mosaic work of triangular design; silver-ware; pile carpet-weaving.

There are some magnificent historical places in Shiraz that Iran Destination provides amazing tours to visit such a beautiful city.

Hafez is one of the greatest Persian lyrist who is regarded the Shakespeare of Iran, and surely a source of national pride. Hafez’s collected works are include a superlative of Persian literature. In fact, most every home in Iran comprises this valuable book and read it regularly for inspiration and guidance.

The Hafez’s tomb  designing is amazing one.  However, architectures situated the garden in an open pavilion surrounded by eight columns, covered with a mosaic tiled dome.

However, Nasir al- Mulk is one of the most beautiful historical mosques of Qajar era which is located in Shiraz. due to its pink-colored tiles, the mosque, however, is also known as Pink Mosque. However, it has a large courtyard, the main entrance of the mosque. 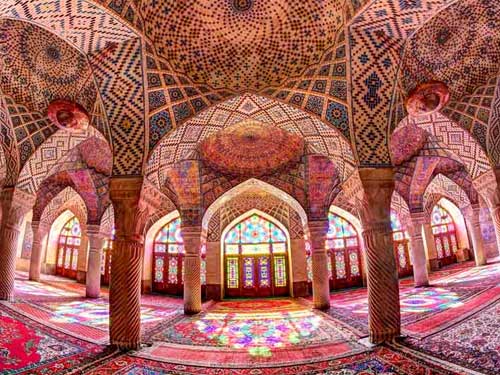 Western nave has several large wooden doors which decorated with colorful glass windows and integrated stone columns with spiral grooves. Besides, the nave ceiling decorated with floral design. However, the majestic mosque is remarkably popular among other mosques in Iran.

Saadi Shirazi is the greatest poet of Persian literature who has emerged after Ferdowsi and is still well known in the world as an excellent poet of his time.

The building of the Saadi is located in an octagonal construction with a very high ceiling. There is a lovely place at the inferior area of the garden, beautiful flowers with pure water is outflowing, likewise, a pool with lots of fishes is in the central part of the place.

Regarding an old tradition, people throw coins in it in order to wish their dreams come true.

Eram Garden is one of the prominent historical gardens of Shiraz which is placed in northern area of Shiraz on Eram street. This is one of the gardens in Iran that is registered by the UNESCO World Heritage Persian Garden.

The most outstanding feature of this building is two-story central porch. There are amazing tile designs. However, They are include historical, literary and mythical figures..

The amazing one, Persepolis was the name of one of the distinguished ancient cities of Iran that regularly was the glorious and ceremonial capital of Achaemenid Empire. The building  dates back to the region of Darius the Great and Artaxerxes; which was the main center for ritual ceremonies particularly Nowruz. 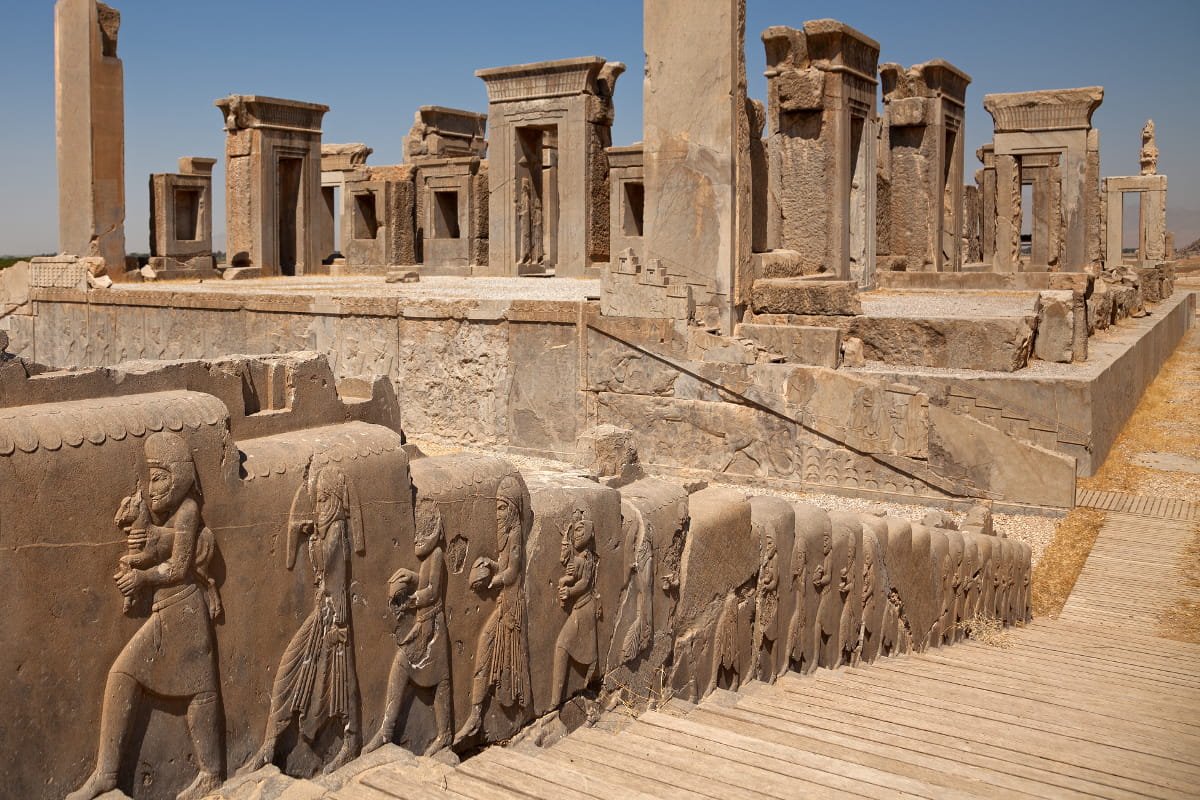 The historical and cultural information of Achaemenid are available on the stone inscriptions. Fortunately, UNESCO declared the ruins of Persepolis a World Heritage Site in 1979. Iran Destination is qualified to deal with an interesting and professional tour to Persepolis with incredible price.

Pasargadae, the political center of the Achaemenids before Persepolis, is the last place on the list of sights outside the city. The tomb of Cyrus is located 50 km from Persepolis. Although the path to reach it is not very smooth, it is worth experiencing the wonderful tranquility of the tomb of Cyrus the Great, now enclosed in a dry and unkind ground. Also, it is famous that after attacking Persepolis, Alexander himself went to see the tomb of the founder of the Achaemenid dynasty.

Karim Khan Citadel, which is another place of interest in Shiraz. It is for 18th century by the founder of the Zandi dynasty, Karim Khan Zand. After the choice of Shiraz as the capital, this citadel was  along with other buildings in line with Karim Khan’s ambitious plans. Also, this rectangular building has four cylindrical towers in the square that was for prisons in the past. The interior architecture of the citadel is stranger than the design of its exterior. If you enter the citadel, the shade of fruit trees and the sound of water in the central pond will be your pleasure.

Iran Destination is an Iran Tour Operator which presents you a qualified travel to any place of Iran. However, It is suggested that before traveling to Iran visit our Iran Tour Packages, definitely, there is some noteworthy offers which can attract you. Please contact us, surely, Iran Travel Tour Agency pleasure to help you regarding any type of questions.