With its sea-drowned caldera, black-sand beaches and crimson sunsets, Santorini is the archetypal Greek island fantasy. But its beauty hides a dark secret.
Giannis Bellonias was standing on the edge of a craggy cliffside in Imerovigli, a village built on the apex of Santorini’s vertigo-inducing caldera, waiting for sunset from the infamous lookout known as the ‘balcony to the Aegean’.

“There, right there! Look at the volcano,” the Santorini local said to me, pointing to what are in fact two small, black lava islands created by volcanic activity (and are the most recently formed pieces of land in the Eastern Mediterranean basin), called Palea Kameni (Old Burnt) and Nea Kameni (Young Burnt). 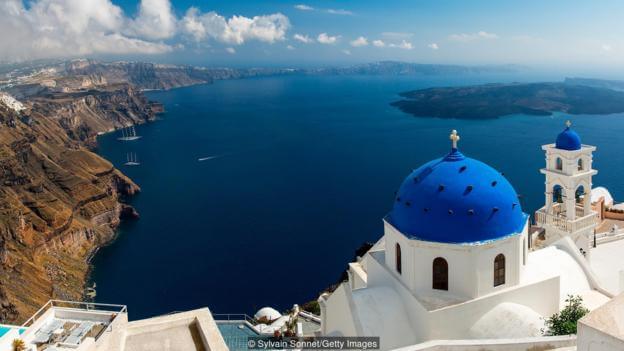 With sun-bleached, blue-shuttered houses dotted among rocks, and alabaster paved paths meandering between them, Santorini is the archetypal Greek island fantasy, an envy-inducing sight on travel brochures and Instagram posts. But beneath the glittering facade, there is a dark secret to its seductive prowess.

Situated in the southern Aegean Sea, Santorini is a small, circular group of five Cycladic islands, made up of main island Thera; Therasia and Aspronisi at the periphery; and the two lava islands. All five surround a colossal, mostly drowned caldera, a bowl-shaped crater that forms when the mouth of a volcano collapses. But during the Bronze Age, approximately 5,000 years ago, Santorini was a single volcanic landmass called Stronghyle (which means ‘round’ in Greek), and one that played a crucial role in shaping history.

Around that time, a civilisation started developing on the nearby island of Crete. The inhabitants were the Minoans, named for mythical King Minos, an enigmatic and educated people, who were warriors but also merchants, artists and seafarers. The Minoans’ ancestry has been the subject of hot dispute: some believe they were refugees from Egypt’s Nile Delta, while others say they hailed from ancient Palestine, Syria or North Mesopotamia. The most recent research says the Minoan civilisation was a local development, originated by early farmers who lived in Greece and south-western Anatolia. Whatever the case, there is little doubt that between 2600 and 1100BC a sublimely sophisticated and advanced civilisation thrived here. Excavations in Crete, especially in Knossos (the capital of Minoan Crete), have unearthed the remains of a spectacular palace, golden jewellery and elegant frescoes. 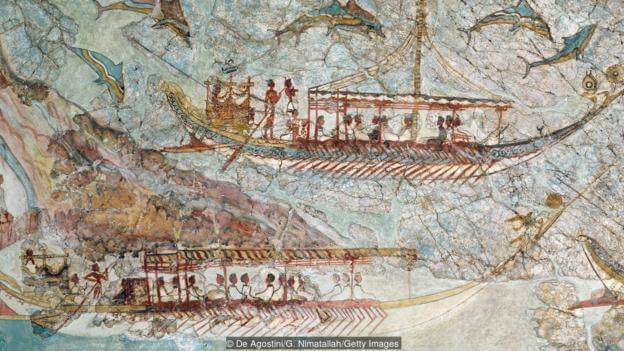 Over the centuries, the Minoan empire extended over the island of Rhodes (309km east of Stronghyle) as well as parts of the Turkish coast and perhaps as far as Egypt and Syria. Stronghyle (now Santorini) was an especially important outpost for the Minoans due to its privileged position on the copper trade route between Cyprus and Minoan Crete. 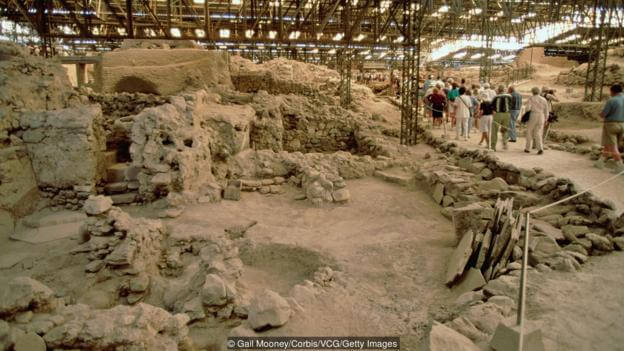 Most fascinating of all, Europe’s first writing systems were found in buildings in Akrotiri and on the faces of Bronze Age rocks in the Cretan palaces of Knossos and Malia: it was here that the Minoans inscribed the first of their written words, initially in the form of Cretan Hieroglyphics and later in Linear A.

Cretan Hieroglyphs is an ancient script of around 137 pictorials that look like plants, animals, body parts, weapons, ships and other objects, and is believed to have been in use until 1700BC. Gradually, the Minoans refined Cretan Hieroglyphs down to the much more stylised Linear A, which took the linguistic helm until about 1450BC. Linear A had various numbers, 200 signs and also more than 70 syllable signs, making it more like language as we know it today (though both scripts remain undeciphered).

Rightfully, the creators of Europe’s earliest written script have been hailed as the continent’s first literate and advanced civilisation. And their intellectual achievements were only surpassed by their uninhibited way of living, celebrating the joy of life even at funerals, playing with bulls instead of killing them and living in blissful harmony with nature. 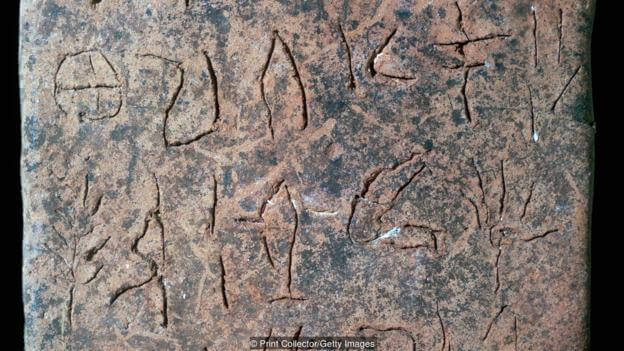 And it was nature that finally decided to kill them.

Between 1627 and 1600 BCE, the Late Bronze Eruption (commonly called the Minoan or Santorini Eruption), perhaps the greatest eruption in 10,000 years, took place on Stronghyle.
“Prior to the eruption, the modern caldera did not exist. Instead a smaller caldera, from a much older eruption, formed a lagoon at the north of the island,” Nomikou said. “During the eruption, titanic flows of 60m-thick landslides of volcanic material fell onto the sea, triggering 9m-high tsunami waves that smashed onto the shores of Crete.”

The waves may have reached western Turkey and even Israel. 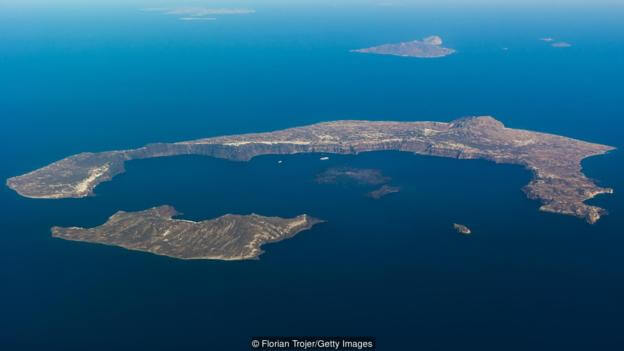 Once the cataclysm ended, the modern caldera began to form (though conjuring into existence the modern Santorini would take several thousand years).

For the Minoans it was the beginning of the end. “The volcanic destruction decimated their commercial boats, and the huge amount of carbon dioxide that was released in the atmosphere disturbed the climate balance, destroying Minoan agriculture. All this gradually enabled the Mycenaeans [a Bronze Age civilisation that inhabited mainland Greece between 1600 and 1100 BCE] to seize their chance to put an end to Minoan independence.”

But what startles Nomikou is that, unlike the ancient Roman town-city of Pompeii, which got buried in more than 6m of volcanic ash and pumice in the wake of Vesuvius in 79AD, no bodies have ever been found on Santorini.

“By all appearances, the people of Santorini were warned in advance and escaped,” she said. To this day, no-one knows where they went.

But if Santorini destroyed Europe’s first great civilisation, it did not destroy language. Once the more-belligerent Mycenaeans ruled over the previous Minoan empire, they replaced Linear A with their own evolved version, Linear B, the first attested writing system of the Greeks, which eventually led to the Ancient Greek language that spread democracy, scientific reasoning, theatre and philosophy around the world.

More than 3,500 years after the mayhem, Bellonias is a proud owner of one of Santorini’s traditional hillside cave settlements, carved straight into the volcanic caldera.

“They are the perfect air-conditioned houses. In the winter, the volcano sends heat your way and in the summer it chills you,” he said with a grin.

Bellonias, an art collector who owns a cultural foundation with a library housing 35,000 books (including hundreds dedicated to Santorini), has been living on and off the island for almost 60 years now, having spent his childhood and formative years in Athens.
“It may surprise you, but what dwells in my mind is that smell,” he told me. “Every time we came to the island from Athens when I was a child – we arrived at dawn from Piraeus; the voyage was a hard labour back then – I was hit by the smell of cavallines,the excrement of the horses that hauled locals and tourists up to Imerovigli, before Santorini, well, caught on.”

“You can still smell cavallines if you sacrifice the convenience of your car,” he added, looking straight ahead at the volcanic islands, behind which fiery colours stretching from deep red to ultra-violet were brewing as the sun prepared to set.

“I have never been able to put these colours in words. I don’t think anyone who has ever lived on this island has. They might be crimson, pink, orange, red, violet… I just can’t put the sunset in words. For me it’s a visceral feeling. Santorini is not for the faint of heart.”

And he’s probably right; it did destroy Europe’s first civilisation, after all.