Did you make your decision and chose Iran as your travel destination? We want to tell you about Chogha Zanbil for traveling to Iran. Travel to Iran with us to get to know about it. Are you interested in experiencing that? what do you know about Iran destination tour one of the most famous Iran travel agency in shiraz and also Iran? This is great and you can be sure that the most exciting experiences will be waiting for you. In this article, we introduce all the requirements to travel to Iran. Also, the do and don’ts of traveling to Iran. Also, we answer this question: how to travel to Iran.

If you have heard the name of the Elamites and are a little familiar with this ancient civilization and its history, then you must have heard the name of Chogha zanabil or even seen it. Choghaaznabil area is actually a remnant of the Elamite period with an area of ​​100 hectares. Chogha zanabil Ziggurat or Chogha zanabil Temple is a flat, amazing building, the most important and the most important surviving building of this ancient city. The city built in the second half of the second millennium BC by order of one of the most powerful kings of Elam. And in 640 BC, order of Assyrian Bani Paul  destroyed, king of the Assyrians in battle with Humban Holtash, the last king of Elam.

Due to the importance and value of Chogha zanabil, it was recognized as a national monument in December 1969 and in 1979, it was registered as the first world heritage site of Iran in the UNESCO World Heritage List. We will tell more about this amazing building in the following.

The best travel and tours of Iran to desert destinations, the north and tourist cities of Iran are collected in the form of best iran tours packages2021 on Iran Destination website. You can join our team, Iran Destination, and get more acquainted with iran tours and all of the tourist attractions and all the best iran tours packages2021. Iran travel agency, Iran Destination, will organize your trip to Iran. You can offer your tailor-made trip to Iran or visit our programs on the Iran tour page. You can contact to our Iranian travel agency, our agents are online to answer all your questions about iran travel. visit Iran is a good choice to get Iran travel services such as hotels in all cities, Shiraz hotel, Tehran hotels and all services about Iran tourism. 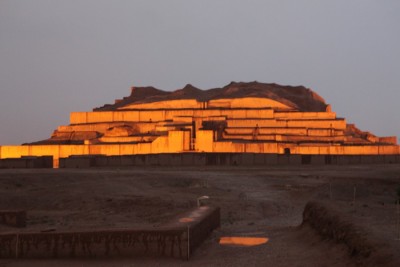 This site is one of the world heritages of Iran. The ruins of the holy city of the Kingdom of Elam, surrounded by three huge concentric walls, are found at Tchogha Zanbil. Founded c. 1250 B.C., the city remained unfinished after it  invaded by Ashurbanipal, as shown by the thousands of unused bricks left at the site.

It is an ancient complex which is placed in the Khuzestan province of Iran. It is one of the few existent ziggurats outside of Mesopotamia that is located approximately 30 km (19 mi) south-east of Susa and 80 km (50 mi) north of Ahvaz.

The story of Chogha Zanbil

The Elamite Empire ruled Iran before the Medes came to power. One of the famous kings of this empire, Ontash Gal, in 1250 BC ordered the construction of a religious and royal city called Duravantash near the river Dez and the ancient city of Susa. This city and its temples were built to worship the two great gods and patrons of the Elamite empire, namely Napirshah (the god of the city of Anshan) and this Shushink (patron of the city of Susa) and received pilgrims in ritual ceremonies and there was permanent residence in it. In this city, three nested fences have been built, which have seven gates, and in the distance between the two fences, there are several palaces, buildings, temples and structures.

Between the outer fence and the middle fence is the royal neighborhood. The buildings in this area include palace number three, palace number two, palace-‌ a tomb and a brick temple called Nosko, simple residential units in the north and scattered tombs.. The palace-tomb has five brick cellars under three rooms, which made of brick and mortar, bitumen and plaster. Painted glazed bricks, murals, glazed studs, mosaic decorative paintings, doors decorated with stained glass and a stone pool found in this palace.

The distance between the middle fence and the inner fence called Temnos neighborhood or holy site. There are many temples in this area for the goddesses and gods of Elam. And other cultures and for this reason it is considered sacred. In this neighborhood, 10 temples have been discovered. And from them inscribed bricks with the names of the gods to whom the temples donated obtained. According to these written documents, more temples designed for this neighborhood. The construction of which  abandoned due to the death of the Shah.

On the east side of this neighborhood. There are four temples that belong to the gods Pinikir, Im (Adad), Shela, Shimot and Nin Eli (Belt Eli) and at the end to Nepratep. These temples known as Eastern temples. Two other simple and rectangular temples are the temples of Temnos. It built close to the inner fence. 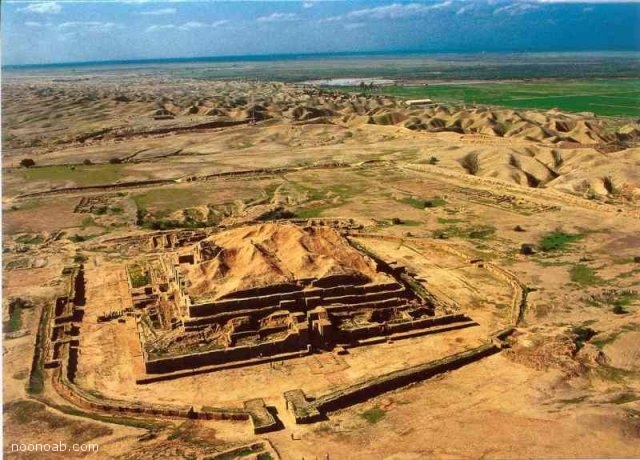 The Choghaznabil Ziggurat is the most important and tallest building in the city of Ontash Gal. Also, It is rectangular in five floors and measures 105 by 105 meters. The height of this temple was 52 meters, of which only 25 meters remain on two and a half floors.

The construction of Choghaznabil ziggurat done in two stages. In the first stage, the ziggurat was on a platform with sides 105 meters long. And included a square central courtyard surrounded by narrow porticos and rooms. The entrance of some rooms was in the central courtyard and others from the outside.

Therefore, the Choghaznabil ziggurat is a brick building covered with bricks. On the fourth floor, the small upper temple built as a room. This supreme temple or Kukunum dedicated to Napirisha. And one of the great gods of the people of the highlands of Ilam. A small number of high-ranking officials and priests allowed to enter this section. Today there is no high temple and only glazed studs and bricks remain.

Choghaznabil Ziggurat has four staircases. All of which connected to the entrance of the first floor and could used to reach the higher floors using the southwest stairs. The number of brick steps and the ziggurat staircase look almost the same. And only in places where the ground was sloping, the number was different. These stairs made of brick and protected with a layer of stone.

Also, Crescent arches built on parts of the stairs that eventually lead to the upper temple. And some parts lack arches for light. Animal statues placed around the entrances as ziggurat guards, two of which found during excavations. One is a lion statue or an eagle lion that kept in the Haft Tappeh Museum. And the other is a bull statue that you can see in the Museum of Ancient Iran.

Interestingly, the ziggurat also has gutters so that rainwater does not damage it. In each of the walls of the first floor, there are four gutters that collect surface water and one gutter repels the water of stairs and doors. When they reach the level of the gorge, these gutters extend as a covered waterway with a crescent arch, and in the courtyard, they probably flowed through existing waterways to the existing wells. There were two gutters on each side of the second floor of the ziggurat that connect to the first floor. These gutters and waterways cover with bitumen and plaster. And in some parts they built in steps to prevent vertical and rapid water fall.