Borujerdiha House is a historic house in Kashan, Iran. The house was built by architect Ostad Ali Maryam in 1857, for the wife of Seyyed Mehdi Borujerdi, a wealthy merchant. The wife came from the affluent Tabatabaei family, which Seyyed Mehdi fall in love with her and built this house for her. 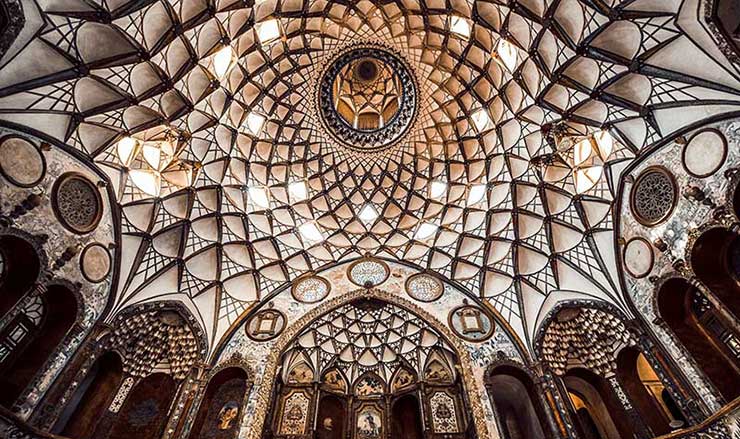 The Architecture of Boroujerdiha House

The construction is like a Tabatabaei house and set for the marriage. There are six sided wind tower and a large hall decorated with mirrors. The best features of the House have resulted in a minimal amount of renovation and alteration of the original structure.

About eighteen years passed for building it with using 25 workers, painters, and architects, although some accounts place the number of craftsmen as high as 150. It includes a delightful plaster and stucco works of fruits and flowers and wall paintings by the royal painter Kamal-ol-Molk and a rectangular beautiful courtyard and three 40 meter tall wind towers which help cool the house to cool temperatures. The shape of wind towers which are made of stone, brick, sun baked bricks and a composition of clay, straw and mortar changed it to the famous House. 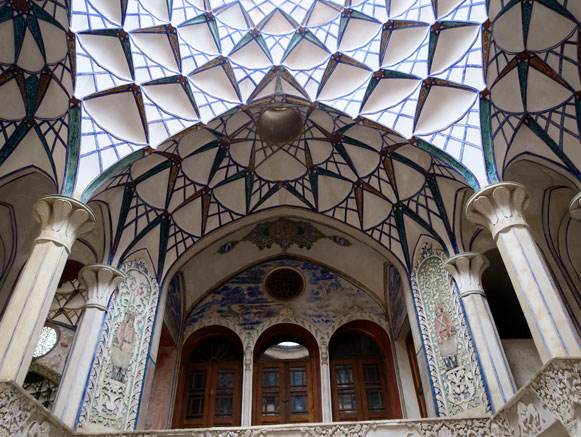 There are 3 entrances, and all the classic signatures of traditional Persian residential architecture. The shape of entrance is in the form of an octagonal vestibule with multilateral skylights in the ceiling. There is a five-door chamber near the entrance with intricate plasterwork. A vast rectangular courtyard opens up with following a narrow corridor. The courtyard has a beautiful pool and is surrounded by trees and flowerbeds. Also there are two rooms after that which due to the high amount of sunlight these two rooms receive; they were mostly utilized during the winter months.

In the east and northeast area there are the kitchen, rooms and stairways to the basement. The wind towers allowed for the basements to consistently benefit from a flow of cool air. A large covered hall adorned with many reliefs, artistic carvings and meshed on the southern side is windows which was the main area for various celebrations.