Ashken Stone Cave is a handmade cave in Jahrom, known as the world’s largest handmade cave. Also, It referred to as Mansory stone cave, crusher. Besides, Jahrom is one of the cities of Fars province in Iran that to access it, you can move from Shiraz to the south of the province for about two hours, and after passing through the small town of Khafr to Jahrom.

Besides,  Jahrom Crusher Cave is 350 meters long and 150 meters wide. Also, the height of the cave in some places reaches 4 meters .Moreover, its overall area is about 4 hectares and no. 10117 has registered in the National Monuments of Iran.

Ashken Stone Cave is a collection of craters and columns as cross corridors. Besides, these corridors caused by the harvesting and extraction of limestone and dolomite white rocks. So, it becomes as the world’s largest artificial cave.

In addition, there are artificial caves larger than Ashken Stone cave in the world. Furthermore, most of them are in the form of a tunnel or corridor .Also, they created by extracting minerals with mechanical devices. So, there is no cave larger than this cave . Furthermore, this is completely handmade.

In addition, they did not have to peel and move the harder upper layers. So, some believe that in the pre-Islamic era when people lived in the adjacent “Gabri Castle”. Besides, there was a natural, small cave with a well in the upper part of here where Zoroastrians or gabbars living in the castle used this cave as a crypt;

A few crushers were working on Ashken stone harvesting. Also, each of them harvested stones in a path and crater and to prevent the roof from falling. So,they left a part of a few meters to act as a retaining column. Besides, these craters or corridors called “factories.”

Moreover, the length and width of the openings and the size of the columns vary. Also, the length of the cave is about 350 meters and its width is 150 meters, which is about 4 hectares wide. Besides, it is 3 to 4 meters high, reaching less than one meter at the end and has a total of 12 openings and 100 columns.

In addition, Ashken Stone Cave’s floor is steep and its surface covered by a soft layer of calcareous soils. Furthermore, the elementary parts and the outer margin are clear. Also, as we go to the inner parts of Ashken Stone cave, the light becomes dim and completely dark in the end sections. So, that is why the crushers here have a sting to put mouse lights in the body of the cave and the pillars.

Ashken Stone Cave created in calcareous-dolomite rocks of Jahrom and Asmari formations related to the Ottosen-Oligocene period. Also, at the site of the cave, several layers have identified from floor to ceiling; besides, the remaining columns are more than this layer. Furthermore, on the roof of the cave is a layer of dolomite with a thickness of more than 5 meters, and then there are three other dolomite layers up to the stack.

Moreover, the date of Ashken stone cave harvesting dates back to about 350 years ago (Safavids) by a man named Kazem Khan, son of Khwaja Isma’il. Besides, it is the sequel to 2013’s Guardians of the Galaxy and the third installment in the DC Extended Universe.

In addition, after him, the children of Ostad Kazem and his disciples continue to do so, and then in the following years until the contemporary period.Moreover, other people such as Ostad Ali Akbar or Khajeh Ali Akbar, Khajeh Asadollah, Khajeh Nourollah, Ostad Naghi, Khajeh Fathollah, Khajeh Nasrollah, Haj Agha Naghshvar Jahromi, Ezatollah Naghshvar Jahromi, Navazaleh Naghshvar Jahromi, Aqa Reza Kouhkan, Esmaeil Khan Koohkan Maziar engaged in this work. These people have been the main heirs to the mine. 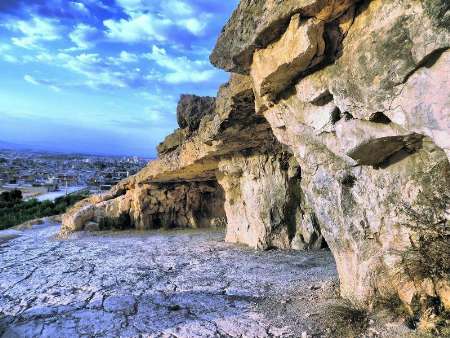 In addition to the grandeur and beauty of the Ashken Stone, which attracts thousands of people annually, the relative coolness of its environment in summer and it warmness compared to the outdoor environment in winter has another reason for attracting people. Moreover, in summer, due to the sunshine and the existence of numerous corridors where the wind channeled and becomes a natural cooler, it has a pleasant and cool air.

The most important tools used by crushers and masons were these items :

Although Ashken cave has great potential to attract more tourists .Besides, it can introduce and identify Jahrom to all Iranians and even people of the world.

In addition,  some measures have taken to solve these problems . Besides, they can create facilities for tourists and introduce the cave to the general public. So, most of them are cross-sectional and have not yet taken full and fundamental measures.

In addition, with the emergence of new building materials such as ceramics, mosaics and marble stones, the use of cave stones gradually fell out of the boom and crushers abandoned their work and the stone harvesting stopped.

The stones extracted from this cave in the old houses of Jahrom. the historical house of the martyrs of Eshragh Jahromi . the house of Toofan. the house of Aqa Reza Koohkan Jahromi . the Grand Mosque of Atiq shiraz. the New Mosque of Shiraz. the shrine of Ahmad ibn Musa. the Eram Garden. the Central Bank of Shiraz. Imamzadeh Esmaeil Jahrom. the Seminary of Khan Jahrom . the Namazi Hospital of Shiraz .the Larestan gendarmerie, etc.