In mid-January, the snow made the little coastal town of Šventoji in north-west Lithuania feel like a film set. Restaurants of Lithuanians, shops and wooden holiday cabins all sat silently with their lights off, waiting for the arrival of spring.

I found what I was looking for on the edge of the town, not far from the banks of the iced-over Šventoji river and within earshot of the Baltic Sea: Žemaitiu alka, a shrine constructed by the Lithuanian neo-pagan organisation Romuva. Atop a small hillock stood 12 tall, thin, slightly tapering wooden figures. The decorations are austere but illustrative: two finish in little curving horns; affixed to the top of another is an orb emitting metal rays. One is adorned with nothing but a simple octagon. I looked down to the words carved vertically into the base and read ‘Austėja’. Below it was the English word: ‘bees’. 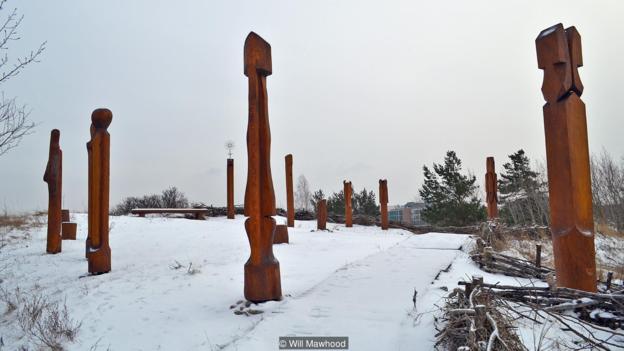 This was not the first time I’d encountered references to bees in Lithuania. During previous visits, my Lithuanian friends had told me about the significance of bees to their culture.

Lithuanians don’t speak about bees grouping together in a colony like English-speakers do. Instead, the word for a human family (šeimas) is used. In the Lithuanian language, there are separate words for death depending on whether you’re talking about people or animals, but for bees – and only for bees – the former is used. And if you want to show a new-found Lithuanian pal what a good friend they are, you might please them by calling them bičiulis, a word roughly equivalent to ‘mate’, which has its root in bitė – bee. In Lithuania, it seems, a bee is like a good friend and a good friend is like a bee. 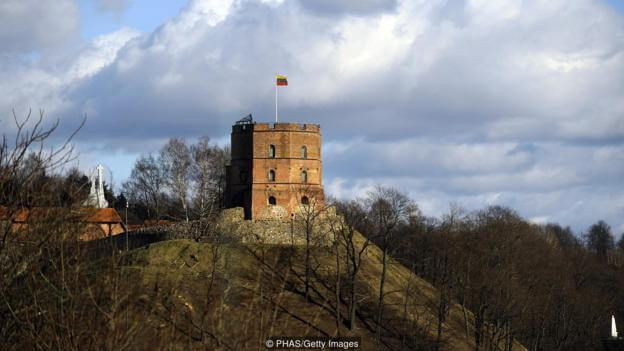 Seeing the shrine in Šventoji made me wonder: could all these references be explained by ancient Lithuanians worshipping bees as part of their pagan practices?

Lithuania has an extensive history of paganism. In fact, Lithuania was the last pagan state in Europe. Almost 1,000 years after the official conversion of the Roman Empire facilitated the gradual spread of Christianity, the Lithuanians continued to perform their ancient animist rituals and worship their gods in sacred groves. In the 12th Century, modern-day Estonia and Latvia were overrun and forcibly converted by crusaders, but the Lithuanians successfully resisted their attacks. Eventually, the state gave up paganism of its own accord: Grand Duke Jogaila converted to Catholicism in 1386 in order to marry the Queen of Poland.

This rich pagan history is understandably a source of fascination for modern Lithuanians – and many others besides. The problem is that few primary sources exist to tell us what Lithuanians believed before the arrival of Christianity. We can be sure that the god of thunder Perkūnas was of great importance as he is extensively documented in folklore and song, but most of the pantheon is based on guesswork. However, the Lithuanian language may provide – not proof, exactly, but clues, tantalising hints, about those gaps in the country’s past.

In Kaunas, Lithuania’s second-largest city, I spoke to Dalia Senvaitytė, a professor of cultural anthropology at Vytautas Magnus University. She was sceptical about my bee-worshipping theory, telling me that there may have been a bee goddess by the name of Austėja, but she’s attested in just one source: a 16th-Century book on traditional Lithuanian beliefs written by a Polish historian.

It’s more likely, she said, that these bee-related terms reflect the significance of bees in medieval Lithuania. Beekeeping, she explained “was regulated by community rules, as well as in special formal regulations”. Honey and beeswax were abundant and among the main exports, I learned, which is why its production was strictly controlled.

But the fact that these references to bees have been preserved over hundreds of years demonstrates something rather interesting about the Lithuanian language: according to the Lithuanian Quarterly Journal of Arts and Sciences, it’s the most conservative of all living Indo-European languages. While its grammar, vocabulary and characteristic sounds have changed over time, they’ve done so only very slowly. For this reason, the Lithuanian language is of enormous use to researchers trying to reconstruct Proto-Indo-European, the single language, spoken around four to five millennia ago, that was the progenitor of tongues as diverse as English, Armenian, Italian and Bengali. 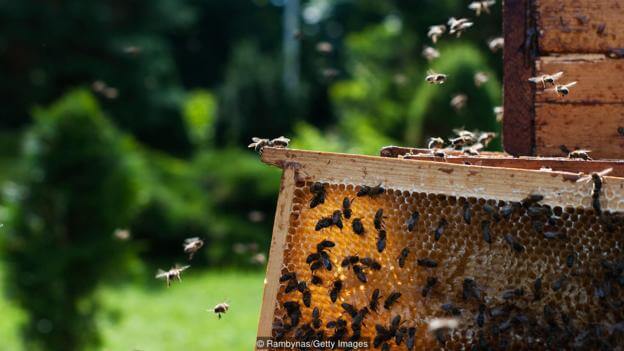 All these languages are related, but profound sound shifts that have gradually taken place have made them distinct from one another. You’d need to be a language expert to see the connection between English ‘five’ and French cinq – let alone the word that Proto-Indo-Europeans are thought to have used, pénkʷe. However, that connection is slightly easier to make out from the Latvian word pieci, and no trouble at all with Lithuanian penki. This is why famous French linguist Antoine Meillet once declared that “anyone wishing to hear how Indo-Europeans spoke should come and listen to a Lithuanian peasant”.

Lines can be drawn to other ancient languages too, even those that are quite geographically distant. For example, the Lithuanian word for castle or fortress – pilis – is completely different from those used by its non-Baltic neighbours, but is recognisably similar to the Ancient Greek word for town, polis. Surprisingly, Lithuanian is also thought to be the closest surviving European relative to Sanskrit, the oldest written Indo-European language, which is still used in Hindu ceremonies.

This last detail has led to claims of similarities between Indian and ancient Baltic cultures. A Lithuanian friend, Dovilas Bukauskas, told me about an event organised by local pagans that he attended. It began with the blessing of a figure of a grass snake – a sacred animal in Baltic tradition – and ended with a Hindu chant.

I asked Senvaitytė about the word gyvatė. This means ‘snake’, but it shares the same root with gyvybė, which means ‘life’. The grass snake has long been a sacred animal in Lithuania, reverenced as a symbol of fertility and luck, partially for its ability to shed its skin. A coincidence? Perhaps, but Senvaitytė thinks in this case probably not.

The language may also have played a role in preserving traditions in a different way. After Grand Duke Jogaila took the Polish throne in 1386, Lithuania’s gentry increasingly adopted not only Catholicism, but also the Polish language. Meanwhile, rural Lithuanians were much slower to adopt Christianity, not least because it was almost always preached in Polish or Latin. Even once Christianity had taken hold, Lithuanians were reluctant to give up their animist traditions. Hundreds of years after the country had officially adopted Christianity, travellers through the Lithuanian countryside reported seeing people leave bowls of milk out for grass snakes, in the hope that the animals would befriend the community and bring good luck. 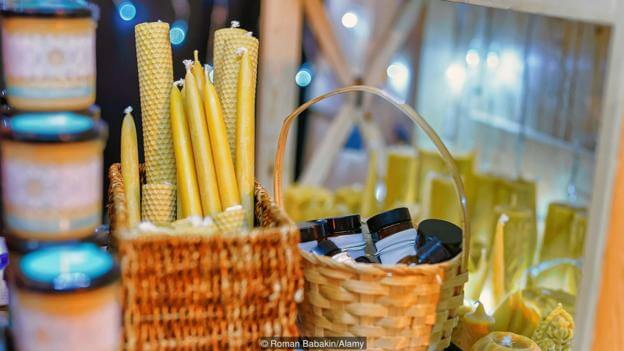 Similarly, bees and bee products seem to have retained importance, especially in folk medicine, for their perceived healing powers. Venom from a bee was used to treat viper bites, and one treatment for epilepsy apparently recommended drinking water with boiled dead bees. But only, of course, if the bees had died from natural causes.

But Lithuanian is no longer exclusively a rural language. The last century was a tumultuous one, bringing war, industrialisation and political change, and all of the country’s major cities now have majorities of Lithuanian-speakers. Following its accession to the EU in 2004, the country is now also increasingly integrated with Europe and the global market, which has led to the increasing presence of English-derived words, such as alternatyvus (alternative) and prioritetas (priority). 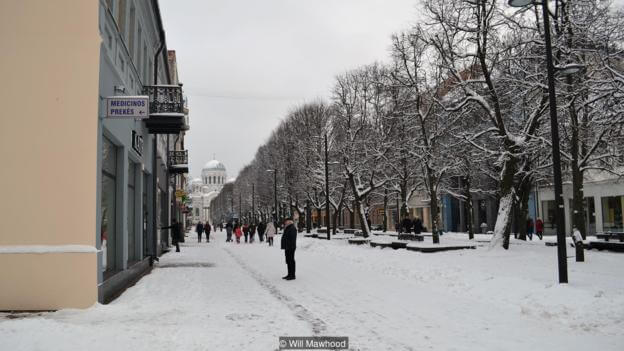 Given Lithuania’s troubled history, it’s in many ways amazing the language has survived to the present day. At its peak in the 14th Century, the Grand Duchy of Lithuania stretched as far as the Black Sea, but in the centuries since, the country has several times disappeared from the map entirely.

It’s too simplistic to say that Lithuanian allows us to piece together the more mysterious stretches in its history, such as the early, pagan years in which I’m so interested. But the language acts a little like the amber that people on the eastern shores of the Baltic have traded since ancient times, preserving, almost intact, meanings and structures that time has long since worn away everywhere else.

And whether or not Austėja was really worshipped, she has certainly remained a prominent presence. Austėja remains consistently in the top 10 most popular girls names in Lithuania. It seems that, despite Lithuania’s inevitable cultural and linguistic evolution, the bee will always be held in high esteem.