The Apadana Palace of Susa is a historical mansion belonging to the Achaemenid era. Also, it registered as a national monument in 2001 with the number 3981. Besides, Stay with us to provide you with information about the history and architecture of this great ancient Iranian monument.

In addition, Shush County has gained worldwide fame due to the monuments and monuments left by ancient Iran. Besides, Apadana Palace is one of the historical monuments that present the glory of Iran’s rich civilization and culture to the world. Furthermore, an ancient mansion has a history of glory.

Moreover, it has opened the mouths of every tourist interested in the history of humanity. Besides, this historical mansion belonging to the Achaemenid era registered as a national monument in 2001 with the number 3981. Also, stay with you to provide you with comprehensive and useful information about the history and architecture of this great ancient Iranian monument. 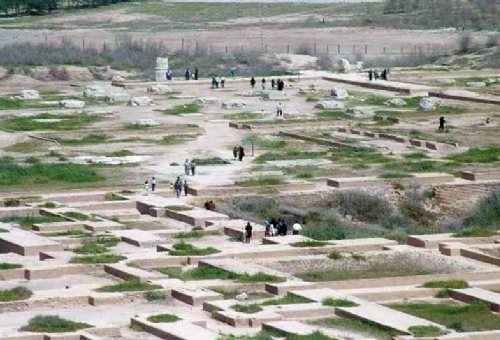 It seems that near the monument, there a complex called the French Palace built by France. Also, if we drive from Andimeshk, 40 kilometers on a lush and beautiful road, we will reach the city of Shush. Besides, it is one of the oldest cities in the world. Furthermore, Archaeological excavations show that the area was home to farmers in 9,000 BC; in 5,000 BC people lived in the castle. In addition, since 4,000 years ago, it is the first place on Earth where urban life has created.

The city of Shush referred to as one of the oldest residential areas in Iran encompasses dramatic historical events from the reign of ancient Iranian kings and emperors. Also, this line of the country is the guardian of magnificent and valuable monuments that represent a part of the rich identity. Besides, the culture of a unique land has bowed and rebuked historians, archaeologists and historians.

In addition, Archaeologists attribute the city’s history to 4,000 BC. Also, a history t has brought a pure civilization of ancient Iran to posterity. Also, the earliest signs of human civilization in Shush County date back to a historical village dating back to 7,000 B.C.

Remnants of the pillar of Susa’s Apadana Palace

Fortunately, it seems that the historical site of Shush registered in 2015 at the 39th session of the World Heritage Committee of the United Nations Scientific, Cultural and Educational Organization (UNESCO). Also, this historical complex consists of buildings such as Shaur Palace, Apadana Palace, East Gate, Hadish, 15th City, and Achaemenid Village. Besides, Shush Jame Mosque and Islamic-era monuments, French castle and Acropol hills.

In addition, Shush County, which in the past considered one of the most important centers of civilization and culture of powerful and magnificent governments of ancient Iran. Besides, it still considered as a significant historical monument and archaeological site today. Also, the city’s Apadana Palace is one of the historical monuments of ancient Iran.

Moreover, it built in 515-521 BC on the orders of Darius the Great (the first king of Achaemenid rule) over the remaining monuments of the Elamite era. Besides, Darius has established the palace as the winter residence or palace of the Achaemenid kings, some experts and archaeologists believe.

Raghi, a historian and archaeologist, has introduced the city of Susa in one of the most important religious centers during Dariush’s rule. Besides, the reason for choosing this place for the construction of the Apadana Palace is the same. Also, it seems that Apadana is an ancient name of buildings composed of halls with multiple columns that referred to the Apadana Palace of Persepolis as an interesting and commendable example of such buildings.

In addition, in 1849, numerous excavations began on the remaining monuments of the city of Shush. Besides, amazing and valuable artifacts from various centuries of Iran, including the Achaemenid Empire, the Sassanid empire, the Ilamian era, the Islamic era. Also, even some historical experts believe that the prehistoric period seized by explorers.

Moreover, it appears that after excavations and investigations by a group of French archaeologists led by Marsal Diulafova and the collection discovered in 1880.Besides, following the discovery of this palace by French archaeologists, the pillars and columns of the palace cut by saws and transported to France. Furthermore, this is while only a few sunstones remain in the area and most of the objects discovered transferred to the Louvre museum in France and kept there.

Architecture of Apadana Palace in Shush

The Apadana Palace of Susa built on the orders of Darius the Great king of the Achaemenid government with an area of 10,434 square meters. Besides, the architecture in this huge complex is extraordinary and remarkable. Also, the architect and designers of this ancient mansion have designed. Besides, it built various sections including the General Bar Hall, harem, gate, reception palace and three central courtyards.

In addition, the walls of the interior of the palace appear to have built using glazed brick. Besides, these bricks decorated by ancient Iranian artists to the motifs of the Immortal Corps, winged lion and lotus flower. Also, the remaining works of these bricks kept in museums in foreign and domestic countries today. Architectural experts believe that the design of the palace is a pavilion. Besides, it consists of three porches consisting of several columns located in the northern, western and eastern parts.