Today we want to talk about Amir Chakhmaq Square in Yazd City. Going to the center of Iran and seeing the desert effects of this land can be very enjoyable. Also, Yazd city is one of the things that surprises anyone and creates different travel experiences for you. Besides, walking through its streets, its adobe houses and wind towers have a special effect, pushing you to previous periods.

Moreover, in a period when skyscrapers had not yet skyrocketed and smoke and industry had no place in people’s lives. Besides, Yazd residents lived in these neighborhoods with a pleasant heart. In addition to all these beauties, Amir Chakhmaq Square in Yazd is showing off in the center of this historic city. Also, attracts tourists and tourists from all over Iran and the world. 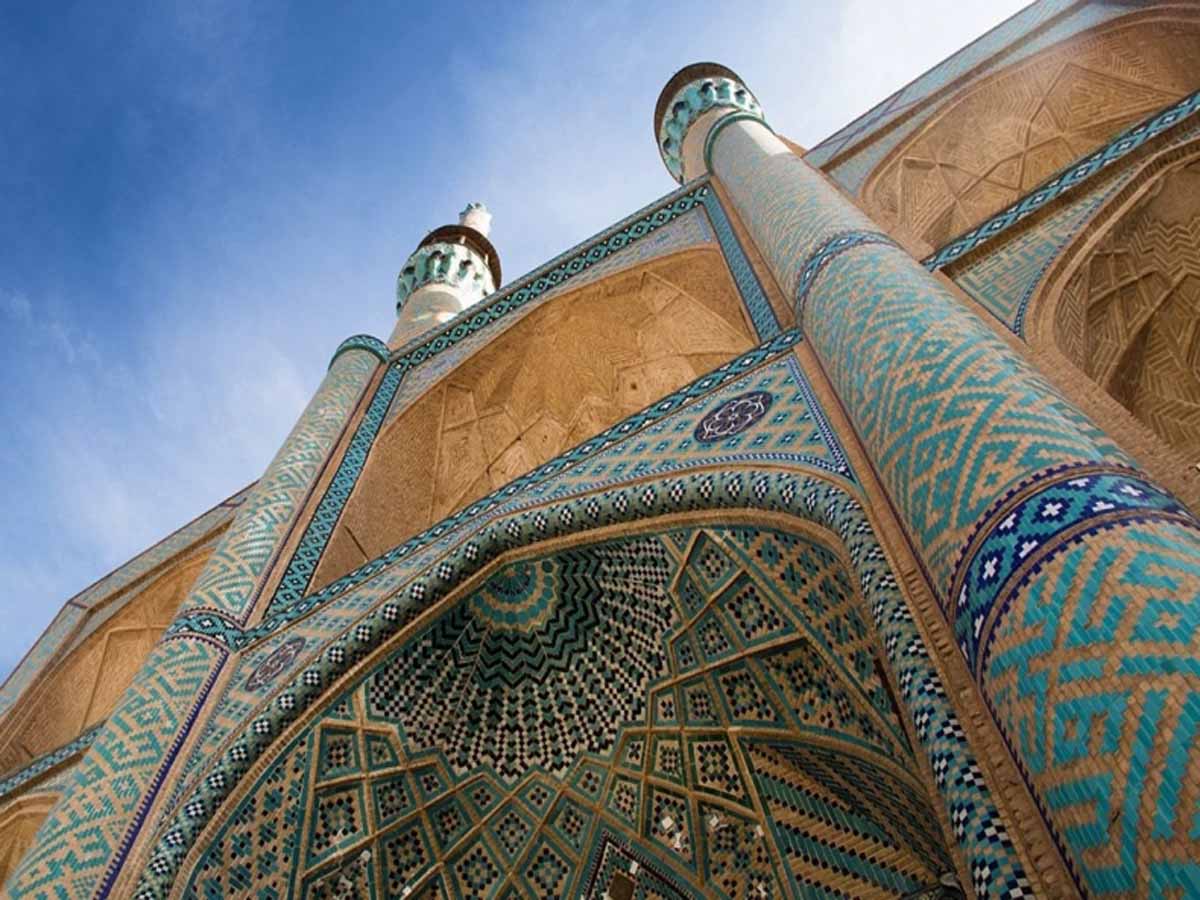 Amir Chakhmaq is the name of a field in the historical texture of Yazd city which houses a collection of different buildings around it. Also, among these buildings are bazaar, tekyeh, mosque, two water storage and one monument. Besides, all of which referred to as one of the most prominent historical and cultural collections of the country. Moreover, each of the buildings in the complex has unique features that make it worth a few times. In addition, Amir Chakhmaq Square is one of the symbols of Yazd city, which referred to as The Epic Square of Yazd.

Amir Chakhmaq Square or Amir Chaghmaq is one of the most prominent landmarks of Yazd, which is registered in the National Monuments List of Iran and consists of various sectors such as Bazaar, Tekyeh, Mosque and Ab Anbar. Shaban caravanserai on the northern side of the square and bath and the tissue caravanserai in the west of Tekyeh Amir Chakhmaq are other attractions of this complex. In contrast, Tekyeh also displays a large pond with fountains and several sculptures, which refers to the role and importance of water and Saqqai culture.

Amir Chakhmaq Square is a 9th-century work by Amir Jalaluddin Chakhmaq. Also, He was one of the leaders of timurid rule, and with the cooperation of his wife. Besides, he built the Amir Chakhmaq complex for Abadani Yazd. Moreover, the most important building of this complex is the New Jame Mosque, which has created in front of it, a large square.

Furthermore, the square and mosque called Amir Chakhmaq. Besides, during the Safavid era and during the reign of Shah Abbas, many changes made to rebuild the complex. Also, the most important of which was the construction of four suqs on the caravanserai.

In addition, in the 13th century, both the Amir Chakhmaq square in front of the mosque and the market became Husseiniyya, which probably did not have the use of Husseinieh today. Also, during the Safavid era and during the rule of Fath’Ali Shah Qajar, some parts were added to the Shabestan and parts refurbished.

Moreover, during the Pahlavi dynasty, this square became a tomb for the dead, which prevented after destroying the graves and the square returned to its original state. Also, the wall of The Amir Chakhmaq Square gradually became nakhrib. As a result, the small square and the mosque and Husseiniyya merged. Besides, today, after many years, the square still stands and has considered as an eye-catching heritage for tourists. 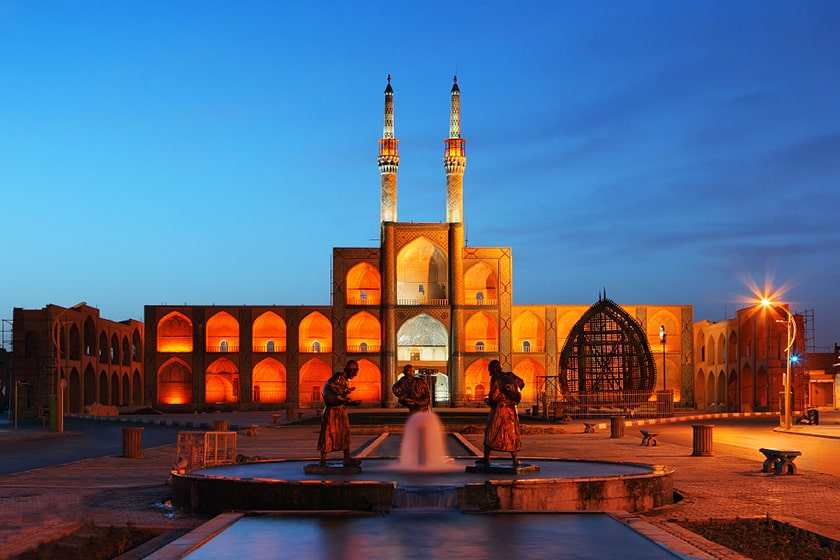 Amir Chakhmaq Mosque, the oldest building in the square

Amir Chakhmaq Mosque, also known as the Dohuk Mosque, is the oldest building in the square. Besides, this mosque located in the second place of mosques in Yazd in terms of beauty and breadth. Also, the mosque has an entrance in different directions that has made it easy to access. Furthermore, a part of the head on the porch of the mosque decorated with tiles and mosaics in which there are inscriptions.

Moreover, the main altar of the mosque made of mosaic tiles and composed of mogharns buildings. Also, in the middle part of the altar, there is a very good-looking marble. Besides, an interesting point about Amir Chakhmaq Mosque is that it has two summer and winter naves that have used according to the weather conditions.

As you know, all cities have a central market, which is the main economic artery of the city. Also, Haji Ghanbar Bazaar in Amir Chakhmaq complex during the Pahlavi era divided into two parts due to the building of Shah Street. Besides, due to this street killing, some of its main spaces such as Panjali Bazaar and Orsi Doss bazaar destroyed.

Currently, the northern part of this market has a great economic boom. Besides, a variety of shops selling textiles, sweets, gold, carpets, etc. Also, some of the various guild workshops operate in Haji Gahbar Bazaar of Amir Chakhmaq Square. in addition, the most important of which are The Mazari Hunting Shop, Halvaee Workshop and Dyeing Workshop. Besides, Haji County Bazaar built by Nezam al-Din Haji County Jahanshahi, who was the ruler of Yazd.

Tekyeh is a place that has many pavilions and watches ceremonies during mourning and performing the ruling palm trees in the shahshin. Also, women’s sections in other parts. Besides, in the 13th century and on the market of this square, there were two large minarets that remained part of the main wall of Tekyeh due to the interactions of the Pahlavi era. Furthermore, which now known as the only main wall of Amir Chakhmaq Square.

Moreover, the middle part of this tekyeh is higher than other arches. Also, it was a place for the city’s elders to be the most senior government official in the center of Tekyeh and watch Ta’zieh. Besides, Tekyeh in Amir Chakhmaq Square minarets located on the top of the middle part, which has given it special glory.

In addition, at that time, muezzins went to the top of these minarets and sung adhan. Also, the entrance of Haji Ghanbar bazaar is from the middle pavilion of this tekyeh. Besides, the entrance to the water storage is possible through one of the stands on the western side of tekyeh of Amir Chakhmaq square. Moreover, In general, although it has been about 80 years since the construction of the minarets of this tekyeh, they have designed to represent a special type of architecture in the historical city of Yazd.

Another most spectacular historical manifestation of Amir Chakhmaq Square is a very large and historical palm that located in the east of this square.Also, known as the Heidari palm. Besides, according to experts, this palm has been in this place since the Safavid period, about 450 years ago.

Moreover, some of them believe it is the oldest palm in the world. Also, the palm is a massive wooden coffin that carried by the people in a ceremony entitled Palm Tree. Besides, it considered one of the symbols of mourning for The Month of Muharram in Amir Chakhmaq Square. Furthermore, the palm made of a lattice set of carved wood with porcelain knots and large beams and its outline is in the form of a cypress tree that symbolizes freedom.

Seti Fatemeh Khatun is the wife of Amir Chakhmaq. Besides, the woman, has killed in the ninth century, and travelers and tourists have gone over her and commemorated her memory.

Iran Destination is a Tour Operator feeling responsible  to provide Iran visitors with the best services through which you can visit this wonderful land. You can look at our Tours and choose one to go to Iran. If you have any questions, please feel free to ask our travel agency team.

Iran tourism is very attractive for tourists from different parts of the world. These trips are held in the form of the 10 best Iran tours & trips 2022 to several destinations in one region. Also, sometimes tours from the north to the south of Iran. Iran tours are very attractive due to the conditions of the event. If you are planning to visit Iran, be sure to participate in these tours. Of course, Nowruz tours in Iran are much more diverse. Also, you can take full advantage of  holiday for Iran tours. Iran Travel