Beneath Chicago’s dizzying skyline and urban parks is an airless, subterranean ‘neighborhood’ that’s having its moment.
The only sounds came from strip lights fizzing in the ceiling and the slow, eerie echo of footsteps in the distance.

Aromas of coffee, grease and chlorine mingled in my nostrils as I pushed through heavy double doors, rounding a corner to a dizzyingly long magnolia-coloured corridor.

To my right was the ground-floor entrance to Macy’s department store, its food hall, with few customers inside, visible through the glass. Opposite was a different kind of window display – a row of 22 rectangles of American Victorian stained glass, backlit and glowing dramatically from the inky black wall.

I was exploring Chicago’s weirdest neighbourhood, the Pedway – an unlikely candidate for regeneration, and an even less likely design muse. 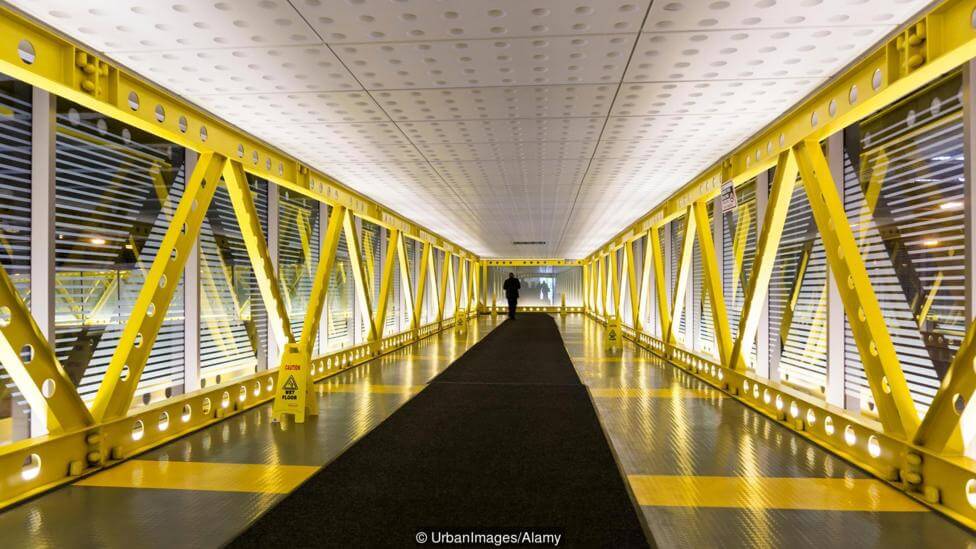 Mazing for five miles under 40 blocks of The Loop (Chicago’s business district), this network of tunnels connects some of the city’s most famous buildings, including Macy’s, City Hall and the Chicago Cultural Center.

Construction began in 1951 to provide safe, weatherproof passage between the buildings, and the hotchpotch of corridors has been built piecemeal ever since. Each section is independently owned and maintained by the corresponding building above, so each section has different lights, even different air temperatures.

“Most people don’t get it,” said Margaret Hicks, who runs tours of the Pedway with her company Chicago Elevated. “But I just love it.”

Most people don’t realise they are in the Pedway

The stained glass display was installed in December 2013, a joint project between Macy’s and Chicago’s Smith Museum of Stained Glass Windows before the latter closed the following October. It was unusual at the time, and it still feels incongruous in this empty subterranean stretch.

Those who use the Pedway do so to escape sweltering summers and bitter winters, striding through on their daily commutes and lunch breaks. The busiest part is through Millennium Station, a Metra train hub with a wavy, fluorescent ceiling and floor lined like a race track. Scenes from the Batman film, The Dark Knight, were filmed here. 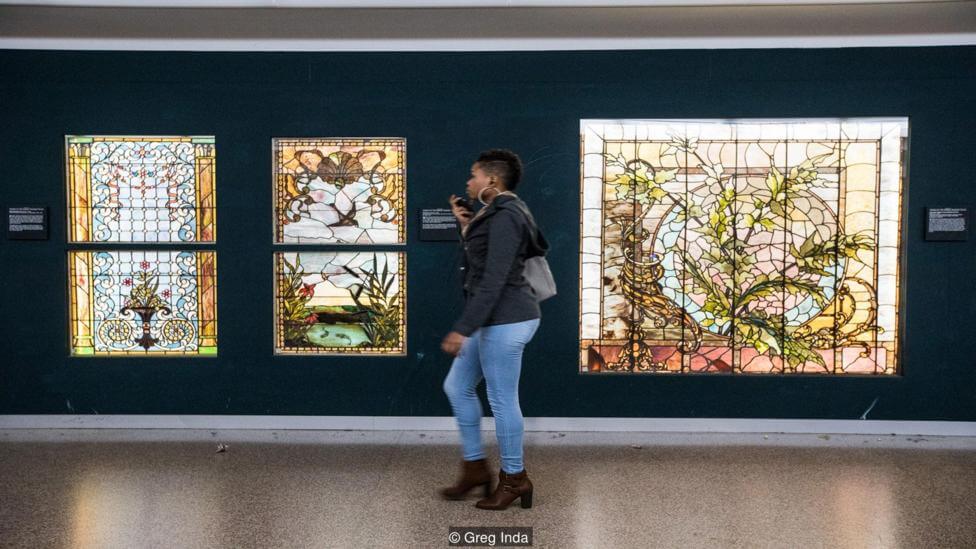 But, Hicks reckons, most people who pass through the station don’t realise they are in the Pedway, or even know what the Pedway is. And it isn’t considered a place to linger, to stop and smell the daisies – or even to admire the daisies intricately fashioned from tiny triangles of glass.

The stained-glass panels include a gourd overspilling with blooms, a blackbird soaring against a patchwork sky of greys and blues, and an owl in the heart of a bold floral display. Many are by unknown artists but one – Spider Web – was created by renowned stained-glass artist Louis Comfort Tiffany, whose father founded jewellery giant Tiffany & Co. This window has tangles of blushing petals overlapping a watery, ethereal blue.

“It’s weird, right?” said Hicks, as we gazed at the display. “I mean, there’s nothing else down here.”

But that’s changing, as others are learning what Hicks has known for years – that the Pedway’s oddness is oddly alluring.

The second Chicago Architecture Biennial, which runs from September 2017 to January 2018, spotted potential in these corridors.

Between the colonnaded entranceways to the Chicago Cultural Center ­– the main Biennial hub – neon tubes glow behind a panel of glass. Inspired by the Pedway’s fluorescent lighting, the installation hints at this mysterious underground world. 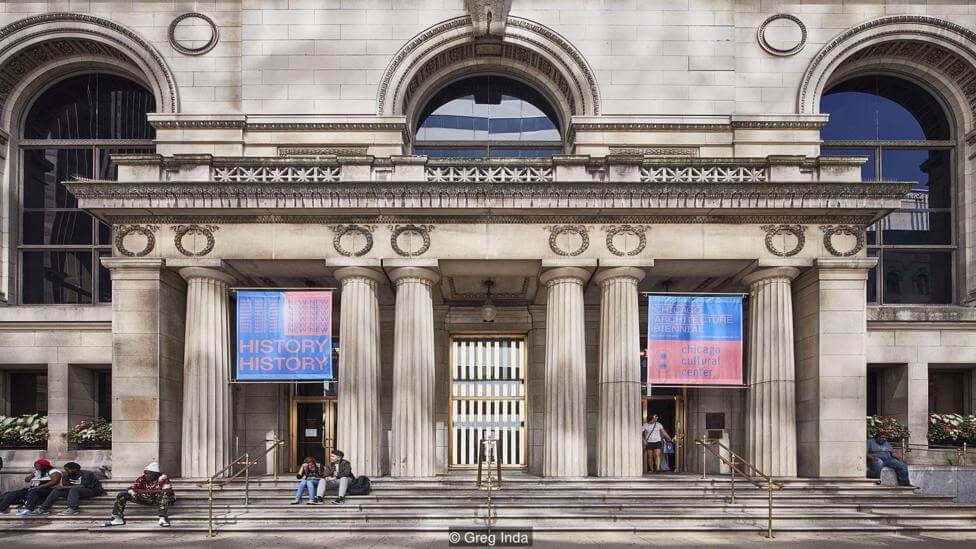 The Los Angeles architects behind the work, Fiona Connor and Erin Besler, scoured the tunnels, examining fixtures and fittings in granular detail and drawing inspiration from the lighting, the textures and the colour palette of off-white and grey.

Inside the centre, just behind the vitrine housing the neon installation, an elevator plunges to a section of the Pedway built in 1989.

On arrival, visitors might wonder if they pressed the right button. Stepping out, they are greeted by a mirror image of what lies above. Connor and Besler have painstakingly replicated one of the Cultural Center’s Beaux Arts doorways, right down to its brass patina.

By turning the two worlds upside down, this piece and the light installation above ground – collectively titled ‘Front Door’ – highlight their connection and their separateness.

“The project connects unsuspecting users of the Pedway to the Biennial experience, by acknowledging the presence of a grand civic space in these somewhat forlorn corridors,” said Todd Palmer, Biennial executive director.

“What is taken for granted is seen afresh, very much in the spirit of the Biennial theme, ‘Make New History’.”

Longer term, local nonprofit Environmental Law & Policy Center (ELPC) has raised $125,000 to transform the Pedway into a tourist attraction, and is seeking further investment from local businesses, tourism groups and owners of buildings linked to the tunnels. 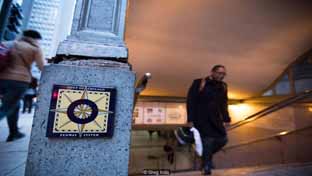 Plans include a farmers’ market and an underground library with a cafe and cosy reading nooks. Art galleries will be dotted about the tunnels, making the stained glass less of an anomaly.

The most ambitious design element is to be displayed above ground in Millennium Park – a glinting glass cube housing a lift to transport people below ground.

It’s certainly a step up from the existing entrance points, tucked around shady corners and down escalators that seem to lead into an abyss.

“The Chicago Pedway can be transformed from an under-utilised asset to a more vibrant part of downtown Chicago, better used by Chicagoans and visitors alike,” said ELPC executive director Howard Learner. “Now we’re working on finding the best paths to transform this better Pedway vision into reality.”

Hicks has mixed feelings about all this change. Dubbed ‘Mrs Pedway’, she knows everybody in her favourite locale. 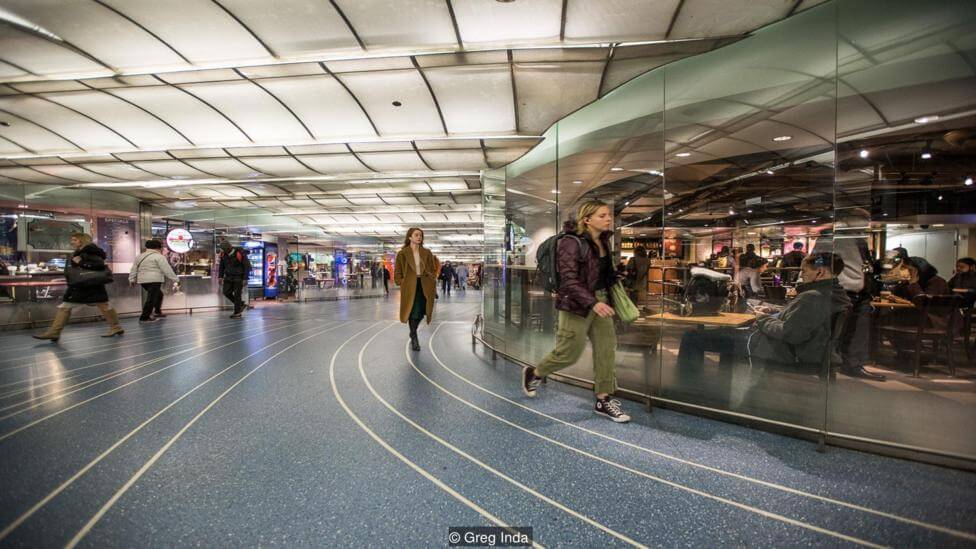 There’s the security guards, the shoe shiners, and Bill, a folk guitarist who has been ‘playing the Pedway’ for several years.

Hicks even lived down there for a week, sleeping at the Fairmont hotel – which has access to the Pedway – meeting friends at Starbucks (there are three of them down here), and using basement entrances to see films, use the gym and dine at restaurants. All without seeing the light of day.

“I really do think the Pedway is one of Chicago’s neighbourhoods. I don’t want to see it gentrified,” Hicks said. “Save the weird, you know? Obviously, there is lots of room for improvement in the Pedway – I don’t want people to feel lost and confused in it. But what I love about it is its strangeness.”

What I love about it is its strangeness

The two other guests on my tour, a Chicagoan and her mother, visiting from out of town, were unfamiliar with the Pedway.

“I never knew this existed,” the daughter said. “When I heard about the tour, I had to come. It’s just so strange.”

Hicks is used to that. “Even most locals don’t know about the Pedway,” she said. “They certainly don’t understand it.” 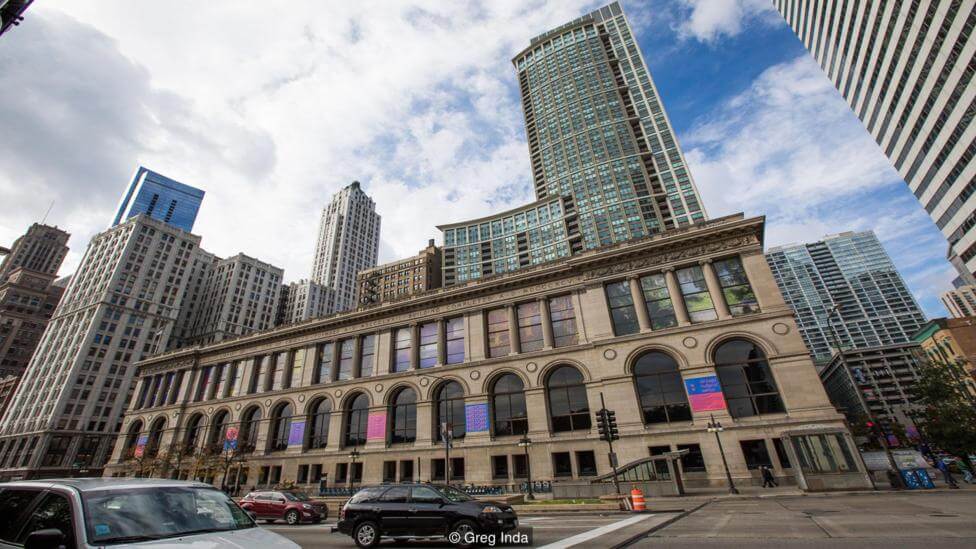 We weaved our way through the network, tiptoeing down dim stairwells and ducking through doorways.

Around one corner, photographer Ed sat slumped on a ledge, staring at the wall with glassy eyes. He perked up as we came into view. Then he slumped back, realising we were a tour group rather than a happy couple.

Ed stoically watches the doors of the Marriage Court, whose entrance is in the Pedway beneath City Hall, almost every single day, waiting for newlyweds who might pay him to take some portraits. A mounted image of a beaming couple stands at his feet next to a bunch of balloons and a bouquet of flowers, props for a potential photo shoot.

Some days the corridors are teeming with giddy couples. But on this day, business was quiet. Asked how long Ed might wait there before giving up, Hicks shrugged and whispered: “I’ve never seen him in daylight.”

I never knew this existed

As we rounded another corner, she added: “I’d love to see more people here in the Pedway, because I want it to grow. I want it to get bigger and bigger.”

If it does become one of Chicago’s must-sees, Hicks will be down here as usual – guiding tours, getting to know the new locals and reminiscing about the ‘good old days’, when the only excitement came from hearing a couple of newlyweds, giggling and skipping down the empty corridors.