A Country that No Longer Exists -Travel News in Iran Destination

A Country that No Longer Exists -Travel News in Iran Destination

A Country that No Longer Exists

A Country that No Longer Exists

I come from a country that no longer exists. In autumn 2011, two decades after its collapse in the early 1990s, I set out on a journey to find Yugoslavia. The fact that the country I was born and raised in no longer existed on the map didn’t matter.

At the time, though, New York was my base. I was a perpetual and professional wanderer who made my living by leaving. There was surface glamour to my travel writer’s life: one day I was sailing in the Galapagos, the next I lounged in an overwater bungalow in Bora Bora. I could be walking down a side street in Lisbon or travelling along a dusty Bolivian road. My life revolved around having once-in-a-lifetime experiences on a regular basis.

But what ran beneath the back-to-back journeys was a pesky displacement. I belonged everywhere and nowhere. And while I knew there was a blessing in not belonging, I couldn’t make peace with it.

Through all these journeys, there were always two nagging questions:

Is this the Place? 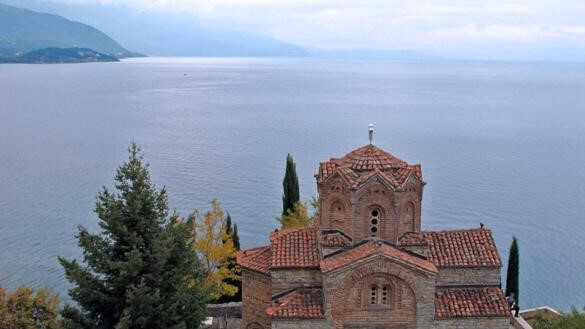 a country that does not exist anymore

Growing up in Zagreb – back then Yugoslavia’s second largest city, today Croatia’s capital – I collected Smurfs. I had seven Barbies, all with long, blonde shiny hair except one, who I decided shouldn’t be blonde so I cut her hair short with scissors, took a marker pen and dyed her hair black. I had a pair of pink Nikes my father brought me from a business trip to Mexico in 1984, a cherished commodity. As a teenager, I watched Beverly Hills 90210 and I was in love with Dylan. I read the poetry of TS Eliot and listened to The Smiths. My parents argued a lot but, that aside, I had a perfectly normal childhood.

But while Yugoslavia collapsed in a vicious war that raged through much of the 1990s, the world shrunk around me. As the war unfolded, it felt as if the ceiling was a few feet above my head, and once I grew I’d hit my head and there would be nowhere else to go. I could bang, try to make a hole in the ceiling, but ultimately it wouldn’t work. I’d be stuck, the top of my head pushed against the ceiling. Instead I wanted to grow into an open sky, and so I left.

I was not a refugee. I was not forced to go; my exile in 1993 was self-imposed. But more than 15 years later, having lived and travelled all over the world, I knew I hadn’t made peace with leaving. It had felt like suddenly, overnight, somebody pulled out the carpet from under my feet and I had nothing to stand on. All I had to balance on was a mishmash of memories of this almost mythical country, some of which I wasn’t even sure were real. 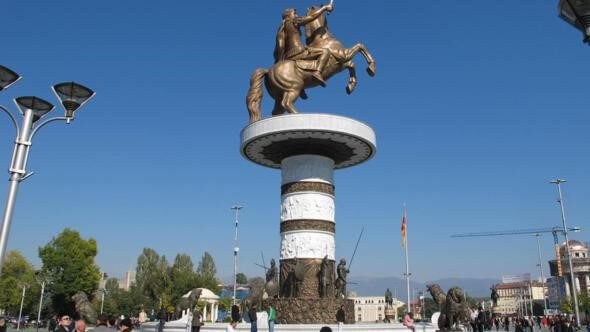 a country that does not exist – travel news

Then an idea came to me one snowy evening in my Brooklyn apartment. I would retrace the borders of my former homeland. I would try to understand the succession of wars that started with Slovenia declaring independence in 1991, Croatia’s fight for independence that raged through 1995, the brutal war in Bosnia that officially ended with the signing of the Dayton Agreement in 1995 and then the Nato bombing of Serbia in 1999. But so many years and a whole lifetime later, it was uncharted ground, a former political entity to which my passport had long expired. I wasn’t interested in diving into the politics of the past anyway. I wanted to capture the emotion that the lost country and its demise left on its people, and on me.

I had a limited budget, grand plans and a fear of what I would find. I was scared I’d be opening a Pandora’s box full of sorrows and losses brought on by war.

I flew to Zagreb and headed out one chilly October evening. It was 18:00 as I boarded window seat 39 on the rickety Cazma-Hisar Tourism Bus heading to Skopje, Macedonia’s capital city. I was about to travel for 12 long hours to get to a place where no-one was awaiting my early morning arrival. Many people found my quest to travel to all the former republics of Yugoslavia strange. “What is driving you to this odd journey?” they asked.

I travelled for six weeks, as planned, roughly a week in each former Yugoslav republic, now independent country: Croatia, Slovenia, Serbia, Montenegro, Bosnia & Herzegovina and Macedonia. I’d brought a couple of long-expired guidebooks, published right before Yugoslavia’s descent into civil war. Along the way, I met people for what I called ‘coffee conversations’. In Yugoslavia, having kava (coffee) with someone reigned supreme as a social ritual. On my journey, I wanted to honour this tradition.

After a day and a half, I quickly became more interested in the stories people shared with me, and the guidebooks dropped to the bottom of my big rucksack.

Throughout the trip, I harboured hope that along the way somebody would say one thing that would crystallise it all – my own life of rootless drifting and the vicious and slow death of Yugoslavia that left an entire generation with a lingering feeling of displacement. I knew I was not alone in feeling lost, but I had to understand how others processed the same collective experience we had as a fragmented nation. Surely, somebody would say that one-line kicker I was after, with all the small wisdoms woven into it. I would set my eyes on a street, a village or a forest clearing, and all would click into place. I would finally get permission to move on. 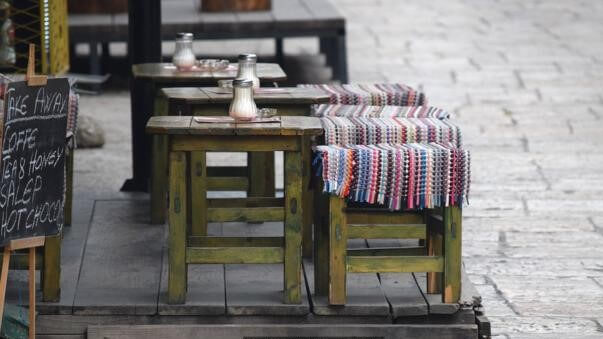 a country that does not exist- travel news

None of that happened. But something else did.

The stories of others became the unexpected backbone of my trip.

Over the course of my journey, I met 50-plus people and recorded our coffee conversations. I sat down with paramilitaries, philosophers, politicians and poets. I had coffee with activists, artists and actors. I chatted with musicians, teachers and NGO workers.

“I have to admit, Yugoslavia never ended for me. I have a case of Yugo nostalgia,” said my first coffee date, Danche Chalovska, on my first night in Skopje. “Yugoslavia is just part of my growing, it’s part of who I am, and it will remain that way.” I had reached Chalovska through a mutual friend back in New York. Daughter of Todor Chalovski, a famous Macedonian poet, she was a poetic presence herself. Bleached hair, wide face with strong features and sparkling eyes, she said ‘draga’ (dear) a lot and put her arm under mine right away, as if we were long-lost friends.

One unseasonably warm evening, I wandered through the streets of the Stara Čaršija (Old Bazaar) quarter in Skopje. As an old man shooed two Roma children away, I ambled through this cobblestoned community of craftsmen in their leather, copper and textile shops, passing stalls that sold only glittery wedding dresses and opanci (traditional leather shoes worn by peasants in south-eastern Europe).

Out of a courtyard came a dusky scent so potent I just had to follow it. Under the shade of plane and fig trees, two kerchiefed women were stirring a huge pot of red puree with a giant wooden spoon. Sabrije Elezi and Usnije Fetahi were preparing ajvar, the ubiquitous Balkan relish made of roasted red peppers. Traditionally prepared in mid-autumn, the pepper season, it’s a labour-intensive process that involves hours of preparation. We sat in the yard under the fig trees, taking turns stirring the pot. Usnije made Turkish coffee, and on a carved wooden tray Sabrije brought out slatko, traditional fruit compote that’s overwhelmingly sweet (‘slatko’ literally means sweet). This one was made of raspberries. I asked Sabrije what she remembered of Yugoslavia. “Life was so much better back then,” she said. 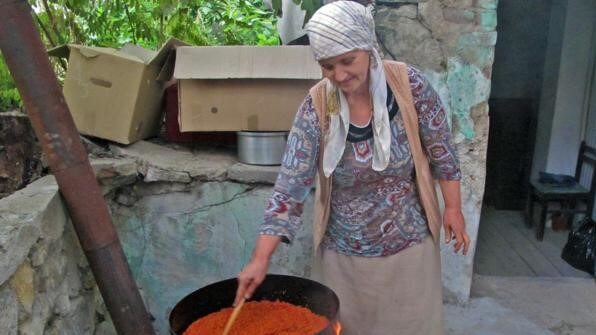 As my coffee companions talked, I listened. Like a travelling therapist, I sat captive to their tales, sipping my 14th coffee of the day, asking questions about Yugoslavia. Listening, recording, bearing witness to unleashed emotions, holding space… Some waxed political and pointed fingers, offering their own theory of Yugoslavia’s collapse. Others zeroed in on a slice of their personal life: a childhood friend they had and never saw again; an estranged family member. There was anger, melancholy, frustration, disappointment, betrayal and the general sense that we all lost something precious. I kept getting glimpses of answers, but no Answer.

When I returned to New York, I would sift through all their stories. Like a beachcomber, I would find those shells that still had the sound of sea in them. But their stories froze me. I was suddenly seized by the responsibility of having to pass on what they shared.

Sometimes in life you set out to chase that big story. Seven years have passed since that chase I thought would cure my curious condition. By retracing my roots, I would find that elusive sense of belonging. I would find closure with my ex-country.

But I am largely the same (though of course I’ve changed – and aged). The journey didn’t quench my wanderlust, as I had hoped it would. Instead, it gave me an intimate window into people’s lives before, during and after Yugoslavia. 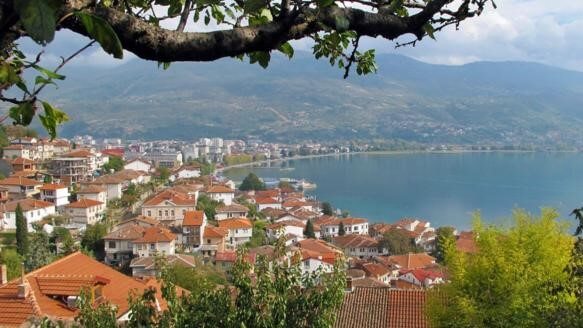 And seven years on, I am beginning to accept that home is a shape shift thing, belonging is just as elusive, and the country that raised me is an imaginary land that once was, and is no more, except in our collective memory.

And sometimes a journey is just that, a journey. Back to where you began.