The country that brought yoghurt to the world

Not only is the history of yoghurt tied to Bulgaria, but Bulgaria’s history and identity can be traced through its production.
In Bulgaria, yoghurt is everywhere. You’ll find it dolloped on falafel wraps, slathered on moussaka and lined up in supermarket refrigerators. It is the basis of traditional Bulgarian dishes such as tarator, a cold soup made of yoghurt, water, cucumber, walnuts and herbs; and snezhanka, a salad consisting of yoghurt, cucumbers, garlic and dill. People sip yoghurt drinks in the streets and dip fried courgette slices into yoghurt in eateries.

“We put yoghurt on everything,” Sofia native Nikola Stoykov told me. “I eat three pots a day. One in the morning, one as a snack during the day and one before I go to bed at night.”

Yoghurt has a long history in this country. Many Bulgarians claim it was accidentally discovered here around 4,000 years ago when nomadic tribes roamed the land. The nomads carried their milk in animal skins, creating a ripe environment for bacteria to grow and cause fermentation, producing yoghurt. In all likelihood, yoghurt was discovered in this way in different places at different times, and probably originated in the Middle East and Central Asia.

However, as Elitsa Stoilova, assistant professor of ethnology at the University of Plovdiv, confirmed, “It’s true that yoghurt was part of people’s diet for centuries in the Balkan lands. It’s a natural process that people discovered somehow… Indeed, the Balkans is one of the many places in the world which has the specific bacteria and temperature ranges needed to naturally produce yoghurt.”

Wherever it was discovered, what we do know is that Bulgaria played a vital role in introducing yoghurt to the West and turning it into the popular, commercial product we know today. 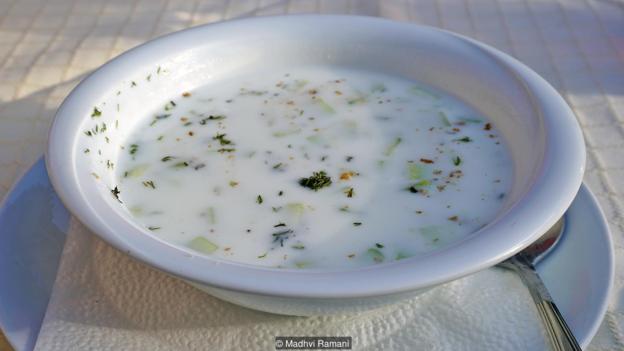 It was a Bulgarian scientist who first broke down the composition of yoghurt. Shortly after his wedding in 1904, Dr Stamen Grigorov returned from the region of Trun in Bulgaria to the Medical University of Geneva, where he was studying. He brought a traditional clay pot, called a rukatka, containing homemade yoghurt back to his lab to examine as part of his studies. A year later, he had identified the essential bacterium that caused milk to ferment and turn into yoghurt. The microorganism became known as lactobacillus bulgaricus as a nod towards the country of yoghurt-eaters, forever linking the Bulgarian nation to yoghurt production. In honour of his discovery, the Trun village of Studen Izvor, where Grigorov was born, now houses the only yoghurt museum in the world.
When we think of yoghurt now, we think of Turkish, Greek or even Icelandic yoghurt. But in the 1920s and ‘30s, due to the scientific community’s focus on Grigorov’s original sample, Bulgarian yoghurt was in vogue. Grigorov’s work detailing the exact composition of yoghurt was picked up by Russian biologist and Nobel Prize-winner Élie Metchnikoff. In his 1908 book The Prolongation of Life, Metchnikoff established a link between Bulgarian peasants consuming a lot of yoghurt and living very long lives. Indeed, Bulgaria’s Rhodope Mountains have been recorded as holding one of the highest concentrations of centenarians in Europe. This idea that yoghurt prolongs life fuelled a health craze in European countries such France, Switzerland, Germany, Spain and Great Britain, incorporating the previously little-known food into the Western European diet. 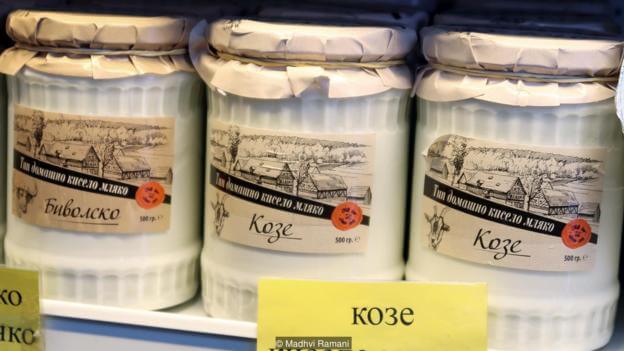 But this new demand for Bulgarian yoghurt fundamentally changed the product. Bulgarian yoghurt was previously made at home, by women, using measurements based on sight. When scientists and manufacturers took over the process, they introduced strict measurements, specialist equipment and ‘pure cultures’ that excluded any additional microflora found naturally in homemade yoghurt. Production on a bigger scale, in lands where the lactobacillus bulgaricus did not thrive so well, led to the use of dried starter cultures and cow’s milk.

Traditional yoghurts were produced with different types of raw milk, such as buffalo and sheep milk, depending on the area or time of year. Nowadays, we link yoghurt with cow’s milk, which is a result of the industrialisation of the product,” Stoilova explained.

Within Bulgaria, although many people continued the tradition of making yoghurt at home, the state takeover of the dairy industry in 1949 led to further changes. Yoghurt became a national icon, something to differentiate Bulgaria from the rest of the Soviet bloc. But since yoghurt was made in different Bulgarian regions and households – not to mention abroad – the state had to create one ‘authentic’ Bulgarian yoghurt.

To do this, microbiologists travelled up and down the country collecting samples of homemade yoghurt from women’s rukatkas, and then conducted experiments to select strains that were most beneficial in terms of health as well as taste. Thus a new, official Bulgarian yoghurt was born, which the state patented, promoted and exported. To this day, the state-owned company LB Bulgaricum continues to hold and licence its patent to countries such as Japan and South Korea, where Bulgarian yoghurt, virtually unknown until about 35 years ago, is now extremely popular. Interestingly, because the unique blend of bacteria native to Bulgaria cannot be reproduced in other countries, these Asian companies must continuously import new starter cultures to create their version of Bulgarian yoghurt.

Since the death of Metchnikoff, and the fall of communism in 1989, Bulgaria has lost the main promoters of its yoghurt, which explains why it is not as famous in Europe as it once was. However, the tradition of yoghurt-making continues within Bulgaria – and is experiencing a revival. During the communist era, the number of producers decreased from 3,000 small dairies to just 28 regional centres. Now, there is a rebirth of smaller, local producers.

One of these is Harmonica, which produces Bulgaria’s only certified organic yoghurt. When I visited their dairy just outside Sofia, technologist Toma Georgiev Bayatev showed me how raw, organic cow’s milk is transformed into yoghurt. The modern process follows similar steps to the homemade process first described by Grigorov back in 1905; the milk is tested, pasteurised at 96C, then cooled down to 43.5C when the starter culture is added and left to ferment the milk for about six hours. After this, the yoghurt it is refrigerated and packaged, ready to eat.
When I tasted the resulting yoghurt, it was sour and particularly dense, with a creamy film on top. It wasn’t as smooth as the yoghurts I am accustomed to; it’s grainy texture was due to the fact that it was made with non-homogenised milk. It was refreshing to taste something so different.

“The authenticity of Bulgarian yoghurt lies in its variety, not in one standardised product. If two grandmothers in different villages make yoghurt from the same products, the results will taste different. This is because yoghurt is an intimate product. It is linked to the land, the animals and the particular taste of the family, and the knowledge of it is passed down from generation to generation,” Stoilova said. 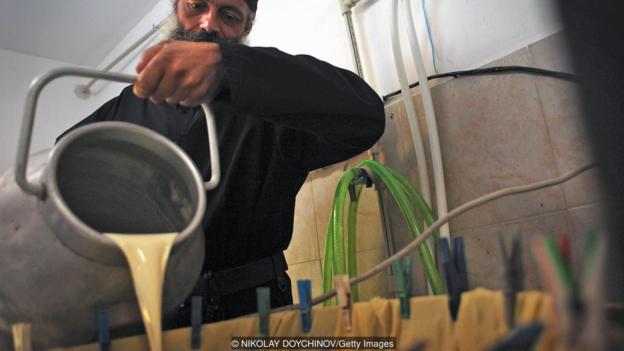 Although there is not as much variety in Bulgarian yoghurt as there once was, the vibrant traditions of yoghurt-making still exists. An informal network of yoghurt makers offer their products in guesthouses and restaurants in villages and small towns, and along roadsides throughout the country. Moreover, the intimate knowledge and connection to the food is still very much alive.

As Stoykov, who eats three pots of the stuff a day, told me: “As a kid, my grandmother used to mix yoghurt with fruit jam and call it ‘ice-cream’ because it was a much healthier option than eating an actual ice-cream. That’s how I got tricked into eating yoghurt, and it became a habit. I am aware of all its health benefits, but that’s not the reason why I eat it so much. It’s basically part of the Bulgarian lifestyle.”